“We saw a series of detailed presentations prepared and initiated by the national majors, large companies, and they are ready to invest many billions of roubles in each of these projects. The size of the projects and the fact that they affect several regions allowed us to integrate them into one large-scale project called the Yenisei Siberia macroregion,” Krasnoyarsk Territory Acting Governor Alexander Uss said after the roadshow.

The pulp mill will be one of the wood-processing facilities in the Boguchany District, Krasnoyarsk Territory. The project operator is Kraslesinvest, a subsidiary of Vnesheconombank. In 2017 Vnesheconombank approved financing for Kraslesinvest to prepare a feasibility study and carry out a pre-project evaluation for the pulp mill. Estimated at 100 billion roubles, the project will create over 2,000 jobs. After receiving the feasibility study and evaluating the final performance indicators of the new facility, Vnesheconombank will consider providing financing for pulp mill construction. The mill will be Russia’s first greenfield project to build a pulp production facility for the past 30 years.

The forum also included Vnesheconombank’s pitch session with the involvement of Vnesheconombank’s regional managers in the Krasnoyarsk Territory. Infrastructure projects for the region were presented by their initiators.

In 2017 Vnesheconombank took a new approach to regional operations, mainly aimed at creating a wide project funnel and selecting projects in the regions. The Bank defined four key elements of the new model for regional operations: regional managers; online applications for financing; cooperation with the Agency for Strategic Initiatives and governors’ project offices; “off-the-shelf” model solutions for specific sectors in different regions.

Vnesheconombank has started to finance SIBUR’s ZapSibNeftekhim project to build a hydrocarbon processing facility. The first tranche is 100 million US dollars. The Bank’s Supervisory Board agreed in December 2017 to provide financing of 400 million US dollars for the project.

“In accordance with the Development Strategy until 2021, Vnesheconombank is involved in project financing in high-technology industries. Vnesheconombank’s strategy and business model specify 26 key industries in each priority investment area. The Bank formulates industry-specific plans. The Polymer Chemistry industry business plan received approval from the Strategy Committee of the Supervisory Board. To build up a high-quality portfolio, we make use of sectoral expertise and select projects in close cooperation with relevant ministries and major market players,” Vnesheconombank’s First Deputy Chairman and Member of the Board Dmitry Kurdyukov said.

The project is designed to develop deep conversion of by-products of Western Siberian oil and gas production, including associated petroleum gas (APG). The project involves the construction of units to produce various grades of polyethylene (1.5 million tonnes) and polypropylene (500,000 tonne). The new facility will make import-substituting polymers and will give an added impetus to finding energy-efficient and green solutions for various manufacturing segments of the economy (pipes and windows for community facilities, automotive parts and components, medical equipment and materials).

Kaliningrad Region Supported by Vnesheconombank in Efforts to Encourage Innovation

Under their cooperation agreement, the Vnesheconombank's Center for Blockchain Competencies and the Kaliningrad Region Government have set milestones for the pilot blockchain project for welfare benefits in the Kaliningrad Region and organised an educational course on distributed ledger technology (blockchain systems) for regional government authorities. About 70 people, including ministers, heads of regional agencies and deputy governors, received training. The trainees studied the fundamentals of cryptoeconomics and saw case studies on the use of blockchains in the economy and public administration, including projects completed by Vnesheconombank.

The training course is part of the region’s programme of cooperation with Vnesheconombank. During the Russian Investment Forum in Sochi in February 2018, Vnesheconombank’s Chairman Sergey Gorkov and Kaliningrad Region Governor Anton Alikhanov signed an agreement to implement, among other things, innovative IT solutions in the region.

This year, together with Vnesheconombank’s Center of Blockchain Competencies, the regional authorities intend to go digital technologies in the social sphere. Blockchain-based transactions will make it possible to simplify the process of dealing with applications for welfare benefits and control the documents and information necessary to provide such benefits. The pilot project involves the four most popular areas of social assistance requiring applications from individuals. These are subsidies for housing and utility services, child allowances, monthly family allowances and urgent targeted assistance to people in difficult situations. In addition, there are plans to test the new technology in paying annual family allowances to prepare children for school. 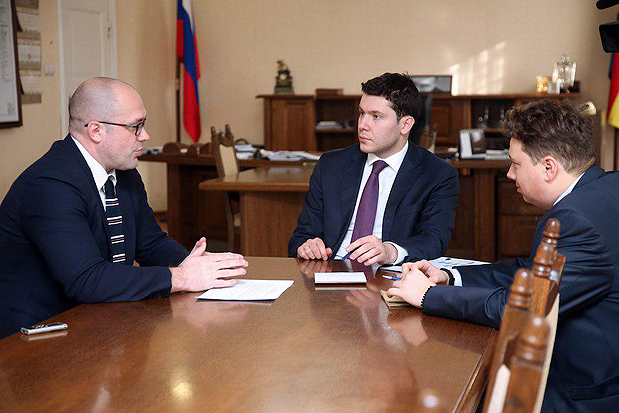 “Our project in the Kaliningrad region is in the social sphere, which is a basic focus of the state’s attention. The use of new technologies can substantially improve the quality of services. In addition, the introduction of blockchain technology will make it possible to bring down the expenditure of trillions of roubles in this area countrywide,” Vladimir Demin, Advisor to Vnesheconombank’s Chairman and Chairman of the Board of Vnesheconombank’s Centre of Blockchain Competencies, said.

“Distributed ledger technology will be operational this autumn and will be tested on the four most popular areas of social assistance. Blockchain technology can have multiple uses. For a start, we chose such important aspects as welfare benefits. We are about to prepare the project. We are planning to complete the project and make it accessible to all residents of the Kaliningrad region this autumn. We will continue to use multifunctional centres and other services provided by government authorities, but the system will respond much faster. The agencies will cut their operational costs and will speed up the retrieval and processing of applications. In the future, blockchain technology will help to find the misuse of welfare benefits,” Kaliningrad Region Governor Anton Alikhanov said.

Vnesheconombank encourages the development of a digital economy in high-priority areas. In an era of digitalisation, Russia has the great potential for becoming a global leader in various technological areas, including the blockchain.

“We set up Vnesheconombank’s Center of Blockchain Competencies as an ecosystem for companies that create blockchain products and solutions. Vnesheconombank helps them in many ways. For example, we provide expert assistance for creating methodologies and validating architecture of solutions. In addition, we will finance the most significant pilot projects, which can later be replicated nationwide. The Center of Blockchain Competencies has currently about 50 blockchain projects, such as solutions intended for petroleum traders, public utilities, energy retailers and insurance companies. The Center of Blockchain Competencies is working on several projects to introduce blockchains into Russia’s public administration. For example, they include the project to switch the Federal Service for State Registration, Cadastre and Cartography over to blockchain technology, the project implemented jointly with the Agency for Housing Mortgage Lending to switch shared ownership agreements over to blockchains, the project to provide subsidised medications for residents of the Novgorod Region,” Vnesheconombank’s Senior Vice-President for Innovation Gleb Yun said.

Bank ZENIT has joined Vnesheconombank’s Project Financing Factory. This mechanism is designed to finance projects under syndicated loan agreements. Under the cooperation agreement, Vnesheconombank (as the Factory’s operator and syndicate arranger) and the commercial bank will search for and review investment projects and decide on financing for such projects by using the Factory’s resources.

“The Factory’s main idea is to provide syndicated loans for projects with government subsidies and government-backed bonds. The syndication mechanism will allow Vnesheconombank to additionally get 3 or 4 roubles for the country’s economy in exchange for every rouble of its investment. I am confident that our intense efforts in syndicated lending will additionally boost support for the Russian economy. Pilot projects in the pipeline are related to medicine (medical equipment), infrastructure and chemistry. We also see the Factory’s considerable potential for project implementation in all industries that are Vnesheconombank’s priorities,” Dmitry Kurdyukov said.

“Public-private partnerships have used different lending mechanisms for years and found them to be generally effective. Vnesheconombank’s new Project Financing Factory is, however, intended to deal with a critical issue of providing targeted support for the economic sectors that can produce a multiplying effect and offer higher value-added goods and services,” Andrey Dobrynin said. “Bank ZENIT views participation in this project as a step in pursuing our new strategy of extensively using corporate lending in high-priority industries.”

The parties agreed to organise communication between them to review investment projects and decide on financing for such projects by using the Project Financing Factory’s resources under syndicated loan agreements. They will also cooperate in encouraging the government and regions to provide support for Vnesheconombank Group’s potential projects.

To prepare and carry out investment projects, the Project Financing Factory’s participants intend to involve expert organisations in project evaluation. Particular attention will be given to monitoring and following up project implementation.

The initial cooperation agreements to finance the Project Financing Factory’s projects were signed between Vnesheconombank and the participating banks during the Russian Investment Forum in Sochi. The participants include Sberbank, VTB Bank, Gazprombank, the Eurasian Development Bank, the Russian Regional Development Bank, Sovcombank and the International Investment Bank.

Vnesheconombank and the Far East Development Fund (FEDF; part of Vnesheconombank Group) will invest as much as 4 billion roubles in a new passenger terminal for domestic airlines at Khabarovsk (New) Airport. The loan agreements were signed on 15 February 2018 during the Russian Investment Forum. As early as a month later, an official ceremony in the presence of Deputy Prime Minister and Presidential Plenipotentiary Envoy to the Far Eastern Federal District Yury Trutnev laid a time capsule and started the construction of the new airport terminal serving Khabarovsk.

The Khabarovsk (New) Airport development project includes renovating the aerodrome complex and building the terminal infrastructure and the AirCity commercial development area. The airline hub will be able to serve a lot more passengers. Its annual passenger traffic is forecasted to double to 4 million in the next ten years. A total of about 5 billion roubles will be invested in the new terminal with an area of 26,000 square metres. Khabarovsk Airport’s new passenger terminal is due to open in late 2019.

“The start of one more large-scale infrastructure project is an example of a systematic approach to achieving the goal set by Russian President Vladimir Putin, the goal of boosting the Far Eastern economy. As for the runway and aprons, they are all financed under the federal targeted programme. Besides, the project is in the advanced development zone and is given preferential treatment. And financing provided by the Far East Development Fund and Vnesheconombank is the most important. In two years we will see a new modern, comfortable and safe airport terminal with international-class sophisticated facilities,” Deputy Prime Minister and Presidential Plenipotentiary Envoy to the Far Eastern Federal District Yury Trutnev said.

“As the main air gateway, as a capital project and as a large taxpayer, this airport has great significance for the Khabarovsk Territory. Together with the investor, we will work to complete the construction on schedule,” Khabarovsk Territory Governor Vyacheslav Shport said.

“We are now beginning to lay the foundations of a new terminal meeting the latest passenger service standards. We invited bids for construction and selected a contractor with extensive experience in similar projects. The deadlines are tight, but we will meet them,” Chairman of Khabarovsk Airport’s Board of Directors Konstantin Basyuk said.

The project structure is a shining example of implementing the public-private partnership concept. The building site is located in the Khabarovsk Advanced Development Zone. The investor will have tax incentives and other benefits for projects in advanced development zones. The Russian Federation allocated 8 billion roubles for runway renovation under the federal targeted programme Russian Transport System Development (2010–2021). The investor will receive financing of up to 4 billion roubles from Vnesheconombank and the Far East Development Fund.

According to Alexei Chekunkov, CEO of the Far East Development Fund, the project’s approach to government regulation and public funding is innovative: the government approved fares before project completion. This allows investors to predict their return on investment, which is extremely important for long-term investment in infrastructure.

The general contractor will be Limak-Marashstroy. The Turkish conglomerate has extensive international experience in infrastructure construction and completed a greenfield project to build Platov International Airport, serving Rostov-on-Don and created as part of preparations for the 2018 FIFA World Cup.