Ruben Aganbegyan has been appointed Advisor to CEO of VEB Capital, Vnesheconombank’s investment company. In his new role, he will be responsible for designing an effective procedure for working with financial market participants and developing new investment products. “VEB needs to improve the communication with investors and to expand the range of products the Group offers to its partners. I have known Ruben Aganbegyan for quite a while and I highly appreciate his professional expertise and outstanding experience. I am sure he will help us raise the quality of our investment business,” said Nikolay Tsekhomskiy, Vnesheconombank’s First Deputy Chairman.

Ruben Aganbegyan took a degree from the Moscow State Law Academy in 1995. He started his career at PriceWaterhouse (an international accounting firm) in 1992 working as a Manger Assistant. In 1995, he joined law firm Clifford Chance, where he worked as a Senior Associate until 1997. From 1997 to 1998, he was Vice-President for Legal Affairs at Credit Suisse Financial Products (Moscow). In 1998, he became Vice-President for Customer Services and Director (co-head) of the Moscow Branch of Credit Suisse First Boston. From 2002 to 2003, he was CEO for Project Financing and Head of Investment Banking at Troika Dialog. From 2007 to 2009, he worked for Renaissance Capital Group in a variety of roles: CEO of Russia at Renaissance Capital Investment Company, Chairman of the Board at Renaissance Investment Management and President of Renaissance Capital Investment Company. From 2010 to 2012, he was Head of the Moscow Exchange.

From 2012 to 2017, he worked for Otkritie Group. In 2017, he became a member of the Board of Directors at Otkritie Holding and President of Otkritie Financial Corporation.

Vnesheconombank and Shenzhen Capital Group Co. (SCGC) signed a memorandum of understanding with a view to formalize the framework of cooperation to promote joint Chinese and Russian successful projects in the areas of innovations and high technology by various means including venture capital and private equity funds. The Parties’ joint efforts will be focused on supporting those companies which possess competitive products and clear plans to expand their businesses on the global market. 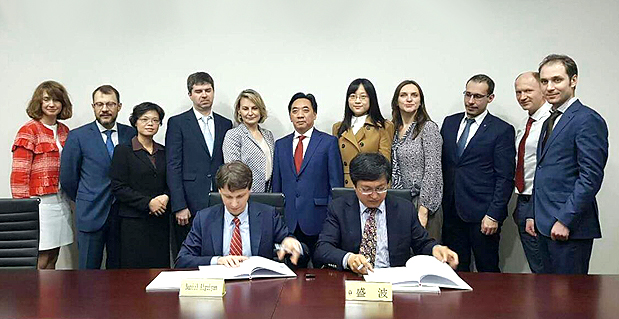 The MoU was signed at the Headquarters of Shenzhen Capital Group in Shenzhen, China by the Senior Vice President of International Business, Export and Financial Institutions of Vnesheconombank Daniil Algulyan and the General Manager of SCGC’s International Business Department SHENG Bo in the presence of the Chairman of Shenzhen Capital Group NI Zewang.

“Signing of this memorandum is an important step in the development of cooperation with our Chinese partners. This partnership offers new opportunities for promoting Russian companies on the Chinese market”, said Daniil Algulyan.

As Mr. SHENG Bo, General Manager of SCGC’s International Business Department noted: "The signing of the MoU between VEB & Shenzhen Capital Group is undoubtedly fostering strategic cooperation and alignment between Chinese and Russian economies. We look forward to working closely with reliable institutional players in Russia so as to achieve both sides’ mutual goal of supporting innovative companies’ development and thereby facilitating the economic growth of the two countries”.

Shenzhen Capital Group Co. (SCGC) is a limited liability company incorporated under the laws of the People’s Republic of China by Shenzhen Municipal Government in 1999. Since its establishment, SCGC has focused on cultivating national industries, shaping national brands, promoting economic transformation and emerging industries development. SCGC has registered capital of RMB 4.2 billion. Upon publishing this news, SCGC has funds under management of over RMB 210 billion. Among more than 830 portfolio companies of SCGC, 136 companies had accomplished their initial public offerings in 16 different capital markets worldwide.