The Blockchain Commune Joins the Association of Global Blockchain Leaders

25 January 2018, Canton of Zug, Switzerland The Blockchain Commune, Vnesheconombank’s centre of blockchain competencies and digitalisation, has become a resident of Crypto Valley, the world’s largest centre for blockchain technology development, and is a member of the Crypto Valley independent association.

Vnesheconombank’s Chairman Sergey Gorkov and the founders of the Association held a meeting in Zug (Switzerland) to discuss the framework and the new opportunities for future cooperation.

“The digitalisation of the economy, society and government involves major changes in infrastructure. Breakthrough technology is generally alien to the existing models of government-society-business interaction and, for example, needs new regulation. It is important for Russia to follow the global trend. We are exploring the world’s best practices in the transition to a digital economy. Switzerland has made great progress in the development, implementation and regulation of blockchain technology, ICOs and cryptocurrencies. Crypto Valley is a stronghold of crypto-technology and the world’s most advanced blockchain ecosystem. I am confident that our partnership will give a new impetus to the development of the global blockchain technology ecosystem and will help Russia to become a world leader in digitalisation,” Sergey Gorkov, Vnesheconombank’s Chairman, said. 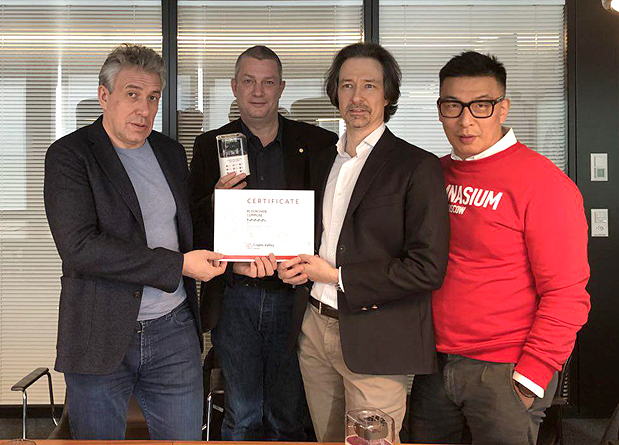 Cooperation is primarily aimed at sharing experience in the regulation of the crypto-economy in general. Another objective is the integration of Russian partners into the educational programs of Crypto Valley, for example, in the context of training for tomorrow’s jobs that come into existence as blockchain technology advances. The Parties are also considering technological collaboration between the expert teams of both countries. Russian experts will get knowledge about international best practices suitable for use in Russia, while Crypto Valley residents will receive support for entry into the promising Russian market.

Recently, Sergey Gorkov took part in a Davos World Economic Forum session “Strategic Outlook: Russia”. According to him, there is a need for a strategic focus on Russia’s top priority areas such as blockchain, quantum technology and convergent technology. “Our objective as a development institution is to create a digital platform for Russia’s economy of the future that will be driven by breakthrough technologies. The pace at which the technologies are released is crucial to Russia’s leading positions in building the digital economy of the future,” Vnesheconombank’s Chairman said. “Blockchain is not only a technology, it is part of the development strategy of Russia’s new economy where the role of the development bank is to be a “catalyst” for raising capital for strategic and priority sectors and a driver of innovation,” he commented at the “Russia and the Global Digital Agenda” panel session held in Russia House and organised by the Roscongress Foundation.

About the Blockchain Commune

Russia’s largest centre of excellence for implementing blockchain projects in a wide range of business and technology areas: from cryptography to supply chain monitoring.

With an area of over 5,000 square metres, the Blockchain Commune accommodates more than 20 companies, such as Ethereum, Bitfury, Waves, EY and PwC.

Sergey Gorkov: ‘How Quickly Breakthrough Technology Comes into Use Is Essential to the Leadership and Development of Tomorrow’s Russian Economy’

Russia today is a world leader in the introduction of blockchain technology with the current primary objectives to intensely introduce quantum technology and convergent technology.

“To ensure that breakthrough technology develops in Russia, it is necessary to work systematically in four key areas: building an ecosystem of start-ups, providing support for major players in innovation promotion, ensuring cybersecurity and the proper level of education and building the necessary infrastructure,” Russian Deputy Prime Minister Arkady Dvorkovich said during the session “Strategic Outlook: Russia” of the World Economic Forum in Davos. 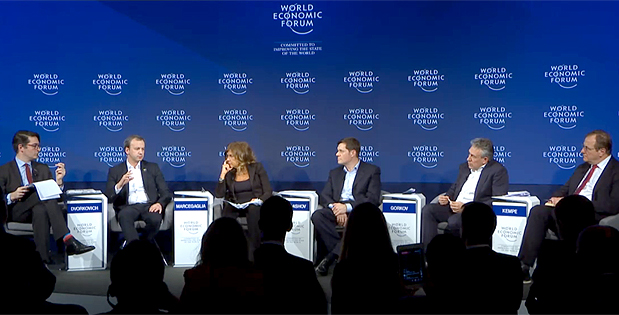 Vnesheconombank’s Chairman Sergey Gorkov said during the session “Strategic Outlook: Russia” that the focus on three areas, such as blockchains, quantum technology and convergent technology, would make it possible to use financial resources to the full and not only follow a trend towards building a digital economy but also be a trendsetter. “Russia today is not eager to attain blockchain leadership, it has already become a leader. As a development institution, we are tasked with building up a digital platform for tomorrow’s Russian economy essentially based on breakthrough technology. In our case, this concerns blockchains, quantum technology and convergent technology. How quickly they come into use is essential to retaining Russia’s leadership in building tomorrow’s digital economy. It is crucial that the Russian Government has launched the Digital Economy programme to work systematically on a massive scale in vital industries,” Sergey Gorkov said.

To intensely introduce blockchains, quantum technology and convergent technology, Vnesheconombank is setting up three global-level centres of competencies. The Blockchain Commune is already fully functional (six projects are well under way, chiefly in public services, including those provided by the Federal Service for State Registration, Cadastre and Cartography, the Ministry of Healthcare and the Agency for Housing Mortgage Lending), engaging world-class experts. As expected, two more centres—for quantum technology and convergent technology—will be open in 2018.

Our focus includes reviewing the regulatory framework and exploring the possibilities of setting up sandboxes and expanding the investor pool. Vnesheconombank is active in investigating the possibilities of cooperating with international partners in investment in direct investment funds to get financing for Russia’s high-priority sectors. Major Chinese and Indian financial institutions are considered to be strategic partners by Vnesheconombank.

During the World Economic Forum in Davos, Sergey Gorkov represented Russia at the session “Bits+ Blocks+ Forks”. Vnesheconombank’s Chairman also spoke at a panel session organised by the Roscongress Foundation in Russia House: Russia and the Global Digital Agenda. “Blockchains are not a technology, but a part of the development strategy for the new Russian economy. A development bank should serve as a catalyst for investment in strategic, high-priority sectors and as a key driver of innovation. I am confident that our focus on three areas, such as blockchains, quantum technology and convergent technology, will make it possible to use our financial resources to the full and ensure Russia’s leadership in fundamental, breakthrough technology,” Sergey Gorkov said.