On resolutions of Vnesheconombank's Supervisory Board

On 2 March 2017, Vnesheconombank's Supervisory Board held a meeting to review the Bank's performance in 2016 and the budget for 2017. During 2016, the Bank's major focus was on crisis management. The Bank directed its efforts towards preventing default of the Group and create a development strategy. The Supervisory Board concluded that the Bank achieved the goals set for 2016. By the year-end, the Bank managed to produce a substantial liquidity surplus of as much as RUB 200 bn. Investors' confidence has recovered. The Bank made a debut issue of foreign currency bonds for USD 600 mn with settlements in Russian rubles. Agreements with Chinese banks were entered into for an amount equivalent to USD 2.5 bn. Return on pension savings as at year-end doubled inflation. In 2017, the Bank is to move from crisis management to restructuring and transformation.

During the meeting, a new organisational and functional structure has been presented to the Supervisory Board which is required for the implementation of Vnesheconombank's Development Strategy until 2021 approved in December 2016. The main changes will affect the investment unit which is to reflect the priority investment arias determined by the new strategy: high value-added manufacturing, infrastructure, export aid, use of defense facilities for civilian production, support for innovation and STI projects.

The Bank also plans to develop new competencies, including integrated industry-specific business solutions such as sectorial analysis, and will focus on proactive search and selection of priority promising projects in regions.

The Supervisory Board discussed Vnesheconombank's proposals for improving the system of corporate key performance indicators which provides for target KPIs for all managers.

The Board also considered creating a strategy committee responsible for the conformity of the Bank's portfolio with the established priorities. The committee will be headed by Presidential Aide Andrey Belousov. It will be formed of both members of Vnesheconombank's Supervisory Board and heads of federal executive bodies.

Another issue discussed during the meeting was the establishment of Vnesheconombank's institute for research and expertise. The aim is to improve the effectiveness of expert and analytical support of the VEB Group and expert research for the Government of the Russian Federation.

During the meeting, the Supervisory Board also made a number of executive changes.

Dmitry Kurdyukov was appointed as Vnesheconombank's First Deputy Chairman – Board Member. Before that he was Chairman of North-Western Bank, Sberbank. Dmitry will lead the reorganised business unit including the investment unit and the industry-specific business solutions unit.

Deputy Chairman Alexey Ivanchenko joined Vnesheconombank's Management Board. He will be responsible for relations with state and regional authorities, corporate governance, public relations and mass media. He will supervise the Bank's new model of working with regions.

Petr Zolotarev and Artem Dovlatov were appointed as Vnesheconombank's Deputy Chairmen. Petr will coordinate the industry-specific solutions unit. Artem will be working on the management of Vnesheconombank's subsidiary and related companies.

Yulia Karpova was released from her duties as a member of the Management Board and has left the Bank from 1 March 2017.

State Corporation “Bank for Development and Foreign Economic Affairs (Vnesheconombank)” on February 28, 2017 fulfilled its obligations to purchase bonds from investors in the course of the put offer under its RUB 5 billion Series БО-05 exchange bonds issue.

During the Russian Investment Forum in Sochi Vnesheconombank and PFC CSKA signed an agreement for the development of cooperation as partners.

On behalf of Vnesheconombank the document was signed by Chairman, Sergey Gorkov, and on behalf of the football club by its President Evgeni Giner. 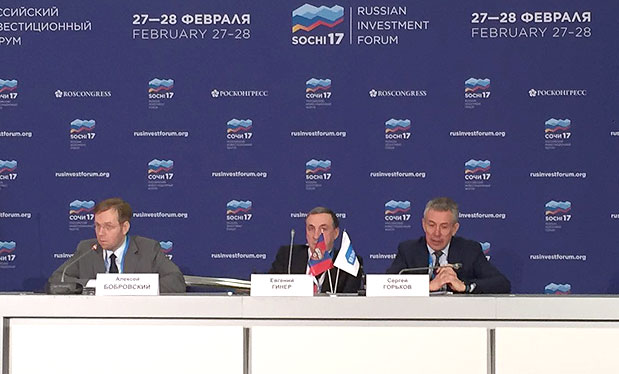 The parties outlined the key terms for the adoption and promotion of a new name for the football stadium, VEB Arena.

“Vnesheconombank is tool for financial leverage for multiple infrastructural projects in our country, and we believe that such promotion of our brand, giving to CSKA Arena the name VEB Arena will create for all visitors of this sporting venue the correct association with the main mission of the Bank for Development”, said Sergey Gorkov.

Evgeni Giner noted that “VEB carefully and respectfully maintained traditions having arranged for construction of the stadium on the historical site. This is a long term project aimed at several generations of players and supporters. Our bank for development showed in practice how it invests in the development of infrastructure and future generations. We are glad that a bank this big will always be next to us on our home stadium.”

The decision that VEB would participate in the financing of the new arena construction was made by the Bank’s Supervisory Board in 2012. The total project value was USD 350 million with VEB's participation share amounting to USD 241 million. VEB regards this project as successful - the venue was erected on time and cost less than budgeted. Moreover, due to a considerable reduction in the construction costs the savings achieved are 40 million US dollars (originally, the bank was to lend USD 280 million).

The stadium meets all requirements by UEFA and FIFA. The first competitive game that PFK CSKA had on the new home arena was on 10 September 2016. The stands are marked with four letters present in the name of the club: C, S, K and A. Apart from standard and luxury seats, the arena has over one hundred of VIP boxes intended for 12-18 persons.

The modern complex built on the site where the old arena used to be, in the 3rd Peschanaya street comprises, besides the sporting part, a 38-storey office tower, a hotel and two administrative buildings. The stadium will accommodate the club's first ever museum. It will feature both modern trophies and different exhibits dating back to the Soviet period.

During the Russian Investment Forum in Sochi, the State Corporation “Bank for Development and Foreign Economic Affairs (Vnesheconombank)” and JSC Garnizon signed a cooperation agreement.

On behalf of Vnesheconombank the document was signed by Chairman, Sergey Gorkov, and on behalf of JSC Garnizon by the acting General Director, Sergey Ten.

The parties have agreed to develop and realize a number of measures for providing to JSC Garnizon financial and non-financial support in the course of execution of government defence orders, national programes for the defence industry complex, as well as investment projects and the projects implying the upgrade of the assets of JSC Garnizon and other Garnizon Holding members.

JSC Garnizon is the largest, in terms of authorized capital, company within the group controlled by the Russian Ministry of Defence. Garnizon Holding currently combines more than 160 companies combined into 6 sub-holdings.

On behalf of Vnesheconombank the document was signed by its Chairman, Sergey Gorkov, and on behalf of PJSC Rosseti by the General Director, Oleg Budargin.

The Parties determined the following priorities for their bilateral cooperation:

The bank, in its turn, is ready to develop for the company and its entities customized financial solutions and technologies and to negotiate the service terms and conditions given the specific implementation procedure of certain projects.

Chairman of Vnesheconombank Sergey Gorkov: “VEB is ready to invest in the projects that adopt best practices in the energy efficiency sphere. These are, first of all, smart grids. We are also interested in the projects of the National Technological Initiative, the breakthrough technologies in which Russia has a competitive edge.”

“The agreement with Vnesheconombank that we signed today means the development of our cooperation. We agreed on the key areas on which our further coordinated actions will be focused. I am sure that the implementation of projects in the context of the agreement will contribute to the achievement of the global development tasks of the power industry,” Oleg Budargin emphasized.

The parties expressed confidence that the realization of joint projects under this agreement will promote the growth of the Russian economy and the expansion of Russia's global presence in the world energy market.

State Corporation "Bank for Development and Foreign Economic Affairs (Vnesheconombank)" is a national bank for development, one of the biggest Russian financial institutions. It was founded in 1924, and since 2007 it functions under a special federal law "On the Bank for Development”. Its supreme managing body is the Supervisory Board, governed by Dmitry Medvedev, Chairman of the Government of the Russian Federation. According to the 2021 Development Strategy, VEB is going to focus on financing the projects of high-scale redistribution in industry, developing infrastructure, supporting non-resource exports, assisting the transfer of military technologies to civilian ones, supporting innovations and projects by the National Technological Initiative.

Rosseti, Public Joint Stock Company, an operator of energy grids in Russia, is one of the largest electric companies in the world. The company maintains 2.30 million km of power transmission lines, 490,000 substations with a transformer capacity of over 761 GW. In 2015, its net power supply to consumers amounted to 720.5 billion kWh. The number of employees of the Rosseti Group of Companies is 216,000 people. The asset portfolio of PJSC ROSSETI includes 37 subsidiaries and affiliates, including 14 interregional and a main network company. The controlling shareholder of the company is the state represented by the Federal Agency for State Property Management of the Russian Federation, which owns 87.9% of the share capital.

PJSC ROSSETI is a leading company in the Russian market in introducing innovative technologies to the main and distribution grid complex. The company pays a great deal of attention to such issues as energy conservation, energy efficiency, international cooperation, environmental protection and occupational safety.