Total value of VEB’s projects in the Krasnodar Territory is 3.5 trillion rubles

MOSCOW, Sept. 30- RIA Novosti/Prime. The cost of funding projects in the Krasnodar Territory by VEB is 3.5 trillion rubles, RIA Novosti reported at the State Corporation’s press office in connection with the Sochi International Investment Forum to open on October 2, 2015.

Out of them VEB fully funded the construction of 20 Olympic facilities in Sochi for an amount of 251.1 billion rubles, with their total value being 334.4 billion rubles.“Since the establishment of the Bank for Development, VEB’s governance bodies approved the Bank’s participation in 331 projects. Out of them VEB completed funding of 77 projects, at present, 198 projects are being funded”, they said at VEB’s press office. 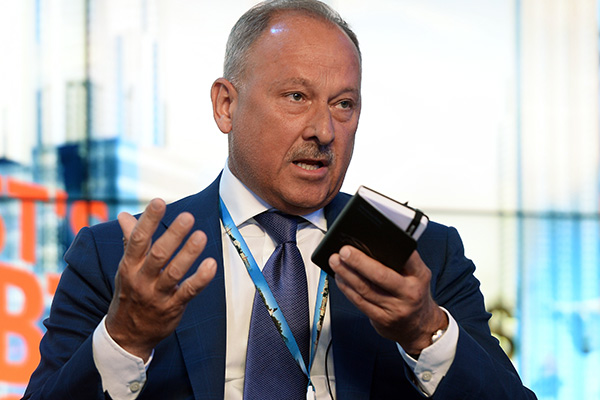 The first Russian East Economic Forum underway in Vladivostok is designed to expand cooperation with countries of the Asia-Pacific region including the world’s second economy – China. On the sidelines of the Vladivostok Forum Vnesheconombank Chairman Vladimir Dmitriev told Lenta.ru about the results of the recent visit to PRC, prospects for transferring to payments in national currencies and commented on the situation with Transaero.

Lenta.ru: How do you size up the results of your visit to China?

Dmitriev: Vnesheconombank is satisfied with the results of its delegation stay in China during the celebration of the 70th anniversary of victory in the Second World War and with the outcome of President Putin’s formal visit to PRC and his talks with PRC President Xi-Jinping.

In our opinion our main result in the signing of the memorandum on the development of the Bystrinsky ore deposit. The project is to be implementedby Nornikel. This project is attractive for the Chinese side because it is funded in Yuansand because it’s a project of finished products. Copper concentrateand noble metals will be supplied to China in full for processing. Irrespectively of this project, the central banks should expand practice of funding in national currencies spreading it to funding for such mid- and long-term projects. Now this practice applies to trade transactions. Together with the Russian Export Centerwe signed an agreement with the head ofGuangdong province (one of the largest provinces in the South of China). The project provides for constructing a large logistics hub for Russian products among other things with high added valueto further supply them to China and Southeast Asian countries. This is a pilot project. We haven’t had such a thing on the Chinese territory before - a facility intended for exporting only Russian products.

What are the chances of the project being successful?

So far, we have tried to receive funding against supplies of Chinese equipment and products to Russia but now we can see that one of the largest provinces is interested in supplying sawn timber, processed timber products with high added value, farm products and other types of goods from Russia through this logistics center.

We also have other capabilities for raising Chinese financial resources. We’ll give high priority to expanding the format of investment cooperation both on our own and through our subsidiary – the Direct Investment Fund and the Russian-Chinese Investment Fund.

Why is VEB so active in negotiations with its Chinese partners?

We believe that our Bank along with other banks affected by sanctions, made great progress in their cooperation with their Chinese partners, they raise credit facilities in yuans. Tied financing makes it possible to raise funds in hard currency.

Our Chinese partners are aware that the amount of mutual trade is falling due to reduced energy prices and we have to compensate for it through diversifying our foreign trade relations among other things by way of increasing the volume of Russian products not related to energy resources.

Does the ruble high volatility in your opinion pose a risk to large-scale projects?

Of course it does, especially if payments are made in national currencies. But a mechanism for such payments provides for central banks to take most of the risks. Although either banks that assume intermediary functions, haveto hedge risks or companies themselves. So, it’s evident that the ruble volatility pose additional risks in trade relations.

What do you need to do to enter the borrowings market of continental China?

At what stage is the discussion on a Transaero general agreement?

Vnesheconombank is not a major creditor of Transaero Airline compared to other banks with state participation. We’re worried by the situation because our subsidiary – the largest Russian leasing company VEB-Leasing extended financial leasing to the air carrier for an amount of 55 billion rubles (Transaero’s total debt is about 250 billion rubles).

And there is no doubt that measures for state support for this air carrier, repurchase of majority stake by Aeroflot and subsequent talks should take into account not only interests of our leasing company but also interests of other lasing companies that extended financial leasing to Transaero.

It’s clear that this concerns us too both interms of consolidated balances of international financial statements and due to the fact that VEB-Leasing used VEB’s credit facilities to purchase aircraft.That is, we are indirect participants inmultilateral talks but the situation with Transaero concerns above all VEB-Leasing directly.

We informed the Government about serious risks posed to Vnesheconombank’s interests.

Why are these risks occurring if Transaero’s financial liabilities are to be transferred to Aeroflot after a transaction (the air carrier acquires a 75-percent stake in Transaero)?

Now it’s a matter of formulating a consolidated position on settling debts to creditors among things by leasing companies. And here I mean not only restructuring of the debt but also a possible writing off a part of the debt.

Are you ready to agree on writing off a part of the debt if other creditors take such position?

This implies the state’s additional support?

Writing off a part of the debt will mean a direct loss for VEB-Leasing and therefore for Vnesheconombankthus violating the covenant (credit terms) and this mightexacerbate VEB’s other problems. So, the state must be aware that this problem as well as the air carrier’s problem should be in the focus of its attention.