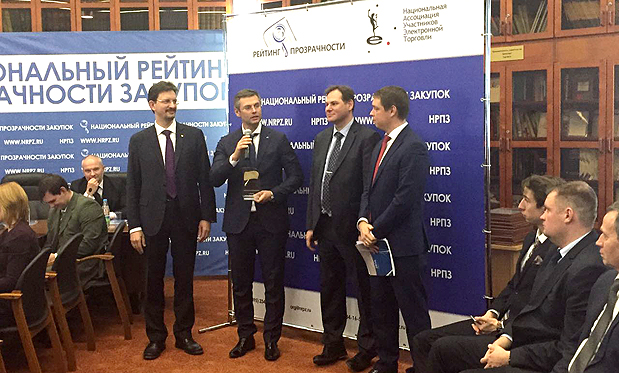 VEB to finance deliveries of UAZ cars to Belarus

For Vnesheconombank, the Agreement was signed by the Senior Vice President for Export Finance and Documentary OperationsDaniilAlgulyan, for DBRB – the First Deputy Chairman of the management Board Tatiana Sosnovskaya, for Belvnesheconombank – by the Deputy Chairman of the Management Board Oleg Korobyin, and for UAZ – by the Director for Exports Andrey Dorofeev.

The parties to the Agreement consider various methods to arrange financing and/or co-financing for deliveries of UAZ vehicles to the Republic of Belarus, in particular, credit and leasing facilities.

The Agreement is designed to encourage and promote bilateral trade and economic cooperation between Russia and Belarus and expand exports of the Russian carmaker.

To quote DaniilAlgulyan: “In recent years, the export potential of Russian manufacturers has significantly increased. Russian exporters tap into new product ranges and acquire experience of operating abroad. Decline in the ruble has also contributed to the competitive price advantage of domestic products. Our objective is to support Russian exporters and facilitate foreign market access for Russian goods”.

Russia and Belarus will create an integration development platform 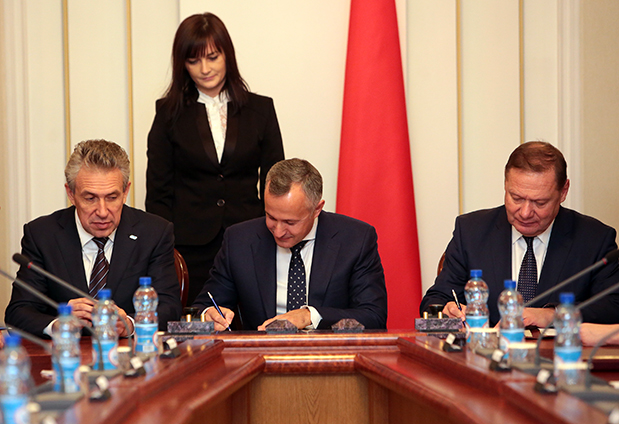 The parties agreed to establish a joint platform on the basis of national development institutions of Russia and Belarus. The launch of the platform will allow to create a financial infrastructure for the implementation of export projects and projects with a high integration potential.

The first stage is expected to involve making a list of joint Russian-Belarusian projects with a high integration potential implemented both in Russia and Belarus.

The parties are planning to elaborate on the possibility of financing joint projects, including the use of state support instruments and opportunities of the Union state.

Vnesheconombank is prepared to participate in the development of programmes for financing exports of jointly manufactured goods to third country markets, inter alia, by working on the possibility to provide support both to buyers and sellers of finished products. 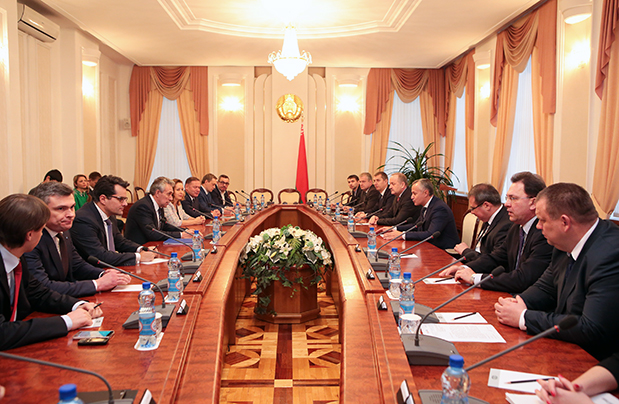 Sergey Gorkov commented as follows: “Russia and Belarus have deep integration relations both in the financial domain and in manufacturing industries. Joint projects implemented on the basis of a new integration development platform with support from the Union state and financial institutions of the two countries will help boost trade between Russia and Belarus and bring goods manufactured by Russian-Belarusian joint ventures to third country markets.”

The cooperation under the Memorandum will facilitate sustainable economic development of the countries, increase mutual trade turnover and diversify trade and investment activities. Particular areas of focus are expected to include the development and strengthening of the export potential of the two countries, creating synergy to promote Russia- and Belorus-manufactured goods to third country markets.

Moreover, Vnesheconombank and Bank BelVEB signed a Memorandum of Cooperation with BelAZ, identifying the priority areas for the parties in the implementation of export projects.

VEB and BelVEB to promote BELAZ exports to third countries

For Vnesheconombank, the Memorandum was signed by the Senior Vice President for ExportFinance and Documentary OperationsDaniilAlgulyan, for Belvnesheconombank – by Deputy Chairman of the Management Board Oleg Korobyin, and for BELAZ – by the Deputy Director General for Financial and Economic Policy Andrei Doronin. 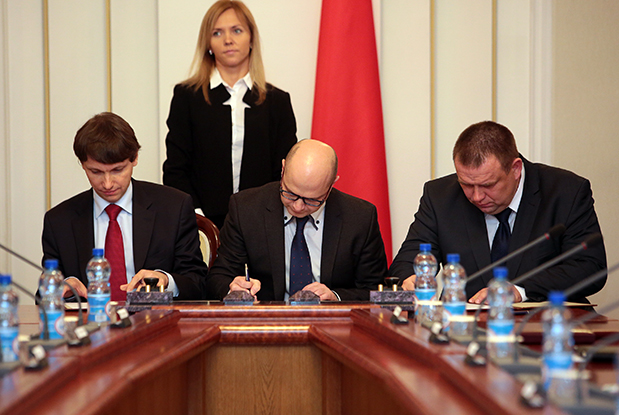 The Memorandum sets out key areas of the parties’ commitment to deliver joint Russian-Belarusian projects, in particular, acquisition by the Belarusian auto group of high-technology products made in the Russian Federation, exports of quarry machinery produced by BELAZ and Russian enterprises on a cooperation basis to third countries, etc. Furthermore, the Memorandum provides for an option to finance projects using syndicated lending facilities and other financial instruments of the VEB Group.

Being a facilitator of cooperation between the parties to the Memorandum, BelVEB together with Vnesheconombank will participate in financial backing for the Russian-Belarusian projects of BELAZ, as well as give advisory, information and administrative support to specific project initiatives.

At today’s meeting with the Chairman of State Corporation “Bank for Development and Foreign Economic Affairs (Vnesheconombank)” Sergey Gorkov, the President of Belarus Alexander Lukashenko pledged his full support for Vnesheconombank’s operations in Belarus.

“On my own behalf and on behalf of the Government and, primarily, the National Bank I give you official endorsement but only in case you deal with us, our businesses, individuals and entities in the same way you do it in Russia. You must treat Belarus as Russia”, said the President.

Furthermore, the President thanked VEB for the support the Bank has never failed to lend Belarus in the hardest of times. “You have never stopped your cooperation with Belarus”, continued Mr Lukashenko. “You give our major enterprises hundreds of millions of dollars in loans. I do appreciate your sticking to the commitment even in lean years. This proves that you have every intention of doing serious business in Belarus”.

Alexander Lukashenko has also observed that the economic situation in Belarus considerably depends on that in Russia. 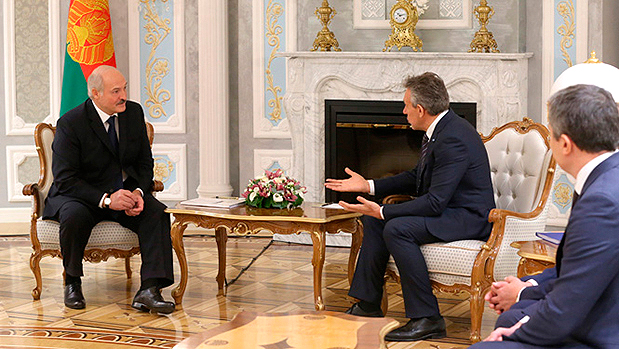 According to Mr Lukashenko, the banks are being evaluated in line with certain criteria. However, Belarus welcomes new banking institutions. “We have no barriers. We have refused to be confined to state and Belarusian banks only. If we sign an agreement with a bank and it is in our interests, such bank would enjoy the same support as a Belarusian one, whether it is state or private”, declared the President.

“Consequently, if any bank, in particular VEB, meets such criteria it is always welcome in Belarus. Furthermore, I guarantee my personal protection if such is ever needed. However, you would need none because we have no raids or bullying. It would be very dangerous”, emphasized the Belarusian leader. “You may be absolutely sure that your business in Belarus is safe whatever our relations with Russia are (Heaven forbid!)”.

“Word of honor: if we strike a deal, we keep it. Otherwise, we cannot expect any investment or capital flowing in”, assured Mr Lukashenko.

“First and foremost, the procedure must be followed and the agreements adhered to. Relations should be based on fair and binding agreements. And this I can guarantee you’, said Alexander Lukashenko.

“I think you would agree that however friendly our relations with Russia are, it is a foreign state. We have had many Russian big companies operating in Belarus and they have always been protected even from the events in their own country. Those who chose not to listen to me (Uralkaliy, by way of illustration), went bust, with new people being now in charge of such companies. But the ones who were wise to take advice enjoyed our full support and protection. And we are not to be swayed in our commitment, neither by the US government, nor by the Russian one. Agreements are ironclad and must be honoured”, concluded the President.

“We have been cooperating for some nine years already. Joint investments are over a billion. We have such large-scale projects as the nuclear power plant, and we have interesting ideas on how to boost Belarus and Russia’s joint exports. We have agreed with the government to conclude an agreement on this matter today. There are many opportunities for strengthening our cooperation,” Sergei Gorkov said.

He also thanked the Belarusian side for the support provided to the bank. “We always manage to find common ground,” the VEB Chairman stressed.

The parties discussed the plans to establish an integration development platform that will promote stronger mutual trade between Belarus and Russia. Mutual interest was voiced to expand cooperation in a number of promising areas such as investment cooperation, advancement of exports to third countries and support of joint innovative projects.

It was also noted that a high-quality level of cooperation between Belarusian partners and Vnesheconombank is a vivid example of real integration. This experience can be used in building up efficient and mutually beneficial cooperation in other areas.

Origin: Official website of the President of the Republic of Belarus