Vnesheconombank and PAO KAMAZ signed a memorandum of cooperation in implementing the export strategy (Naberezhnye Chelny, the Republic of Tatarstan).

The document was signed by VEB's Chairman Sergey Gorkov for Vnesheconombank and KAMAZ's CEO Sergey Kogogin for PAO KAMAZ. The ceremony was attended by President of the Republic of Tatarstan Rustam Minnikhanov. 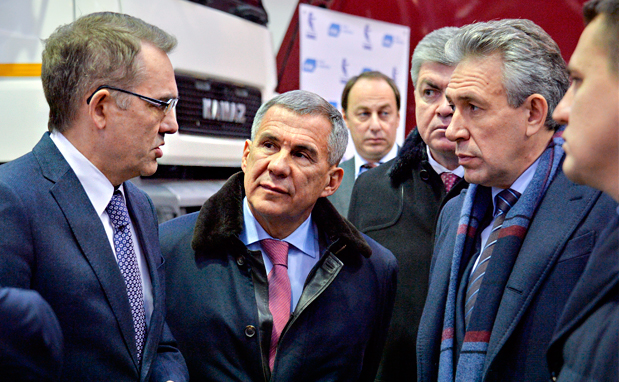 Photo: Web site of the President of Republic of Tatarastan

The parties intend to develop cooperation in projects aimed to bring Russian cars to foreign markets and procure comprehensive support for the implementation of KAMAZ's export strategy.

The parties believe that the memorandum will help to secure and expand KAMAZ's supplies in foreign markets. Vnesheconombank will provide comprehensive solutions in project finance.

During his visit to the Republic of Tatarstan, Sergey Gorkov discussed development prospects with the management of the company. In 2015 and 2016, Vnesheconombank's Supervisory Board approved the RUB 20 bn acquisition of KAMAZ's bonds by the Bank (as the state trust management company for pension savings). The funds were directed towards the modernisation of the existing facilities to launch production of a new generation of cars (K5).

On 2 December 2016, the Chairman of Vnesheconombank Sergey Gorkov took part in the opening ceremony of the Central Seсtion of the Western High-Speed Diameter highway (WHSD) in St.-Petersburg. The opening ceremony was attended by Russian President Vladimir Putin. 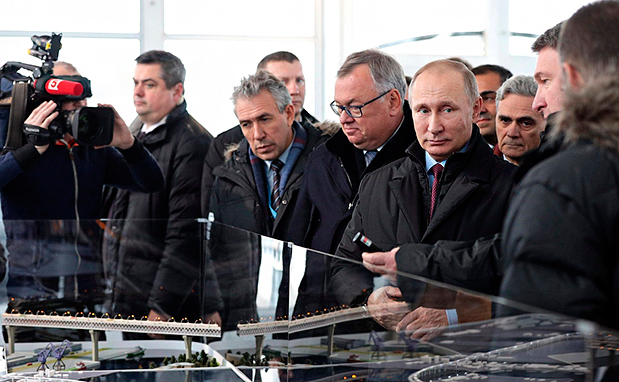 Photo: Web site of the President of Russia

Having provided RUB 25 billion worth of funds for a term of more than twelve years, i.e. amounting to approx. 50% of the syndicated ruble loan raised in 2012 to deliver the project, VEB has become one of the senior lenders for the construction of the WHSD Central Seсtion.

WHSD is one of the major public-private partnership (PPP) projects in road construction financed by Vnesheconombank. According to Sergey Gorkov, co-financing of the WHSD project is something the Bank is quite proud of.

The WHSD Central Seсtion project is being implemented in compliance with a 30-year PPP agreement signed with the St.-Petersburg Municipal Government and its 100% subsidiary ZSD Joint-Stock Company. The contractor in charge of this landmark transport project is Northern Capital Highway Consortium.

The highway is of paramount importance for the capital of the North: it will allow for diverting the bulk of traffic away from the historic centre of the city. On a nationwide scale, the highway, as a part of the North-South international transport corridor, significantly contributes to the mobility of Russia's Northwestern Federal District population.

The WHSD main route length is 46.6km, with a total length including exit roads and junctions exceeding 70km. The project provides for fifteen road junctions and 4-8 traffic lanes. The highway would help reduce traffic in the historic centre, ring road and road network of St.-Petersburg, and allow for motorists to traverse the city in less than twenty minutes.

In compliance with the conditions of Eurobond issue and by order of the Russian Ministry of Finance, State Corporation “Bank for Development and Foreign Economic Affairs (Vnesheconombank)” transferred USD 71,250,000.00 worth of funds to the National Security Depository.

The funds are remitted in payment of interest on a USD 3bn bond issue made by the Government of the Russian Federation in 2016 and maturing in 2026.

As a result, the Bank bought back 1 mn bonds worth RUB 1 bn at par. 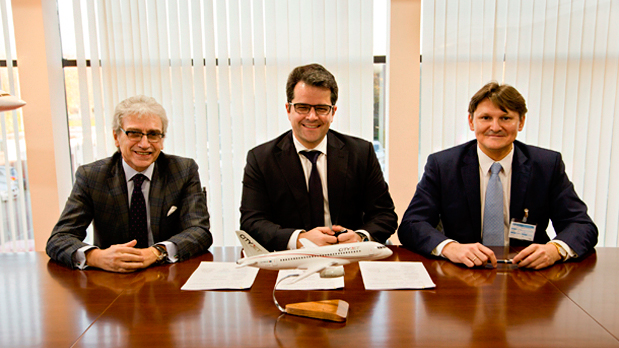 The parties agreed to develop cooperation and provide funding for supplies of five Sukhoi Superjet 100 planes in 2017. The jetliners are to be manufactured by JSC Sukhoi Civil Aircraft and customized by Russian-Italian joint venture SuperJet International S.p.A. for CityJet.

Vnesheconombank financed the delivery of three planes to the Irish regional airline in 2016. The fixed-price contract between JSC Sukhoi Civil Aircraft and Cityjet provides for the supply of 15 planes. Additional 16 planes may be delivered under an option.

Nikolay Tsekhomsky commented as follows: “The Sukhoi Superjet 100 export deal is a signal for the European aviation market that a new strong player has entered. Today, both European passengers and leading airline companies can see Sukhoi Superjet 100 in action. We are receiving positive feedback and are convinced of its future success in the region. Vnesheconombank will strive to support strategic export supplies as this helps to secure a strong position for Russian products on the global market.”

President of JSC Sukhoi Civil Aircraft Kamil Gaynutdinov: “Cooperation with CityJet is an example of successful implementation of plans declared by JSC Sukhoi Civil Aircraft and our focus on the customer's demands: the planes have been scheduled for flights and are to generate profit for the airline company immediately after delivery. Today, CityJet operates three Sukhoi Superjet 100 aircraft. The expansion of the fleet and its successful operation will help to promote the plane on a global scale and boost interest in it. The systematic support by our long-term partner Vnesheconombank is one of the key ingredients to our success.”

Since Vnesheconombank is a key partner for export projects in the Russian aviation sector, the implementation of the Memorandum will contribute to further strengthening and development of the partnership between Russian exporters and international buyers.