In compliance with a decision by the Board of Directors of VEB Leasing, Mr Yuriy Gaichenya has been appointed Acting Director General. The former Director General Alexander Dymov is leaving the company for personal reasons.

“We would like to thank Alexander for his extensive contribution to the Company. He has managed to stabilize the situation in the Company and completed a number of deals. At the moment, all the decisions necessary to increase the Company’s capital and major approaches to identify a new strategy have been made and developed. In future, the Company intends to focus on those national industries that are of priority to VEB, namely, infrastructure, production sector and exports”, Artem Dovlatov, Chairman of VEB Leasing’s Board of Directors, said.

As at 1 January 2016, VEB Leasing with its RUB 710 billion leasing portfolio accounted for a 34% share in Russia’s leasing market. The Company ranks first by a leasing portfolio of railroad machinery, motor transport and equipment, and second in terms of aircraft leasing.

State Corporation “Bank for Development and Foreign Economic Affairs (Vnesheconombank)” on November 28, 2016 fulfilled its obligations to purchase bonds from investors in the course of the put offer under its RUB 9 billion Series БО-02 exchange bonds issue. 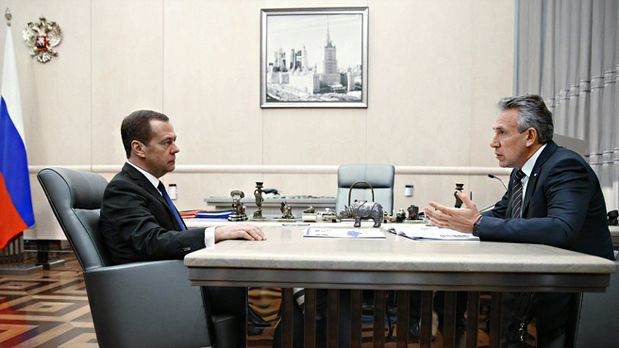 Over the next 2 years, Vnesheconombank will provide funding to more than 20 'last mile' projects

Dmitry Medvedev: Sergey Nikolaevich, despite experiencing some financial difficulties, VEB continues to operate as a lender, a corporate entity and a development institution. What projects do you intend to deliver in the near future and which are at the completion stage?

Sergei Gorkov: Currently, the Bank’s portfolio comprises over twenty projects financed up to 80-85%. For various reasons, these projects have been suspended. Primarily, it was due to insufficient liquidity and funding. Now, we are in a position to begin financing these projects again.

Dmitry Medvedev: What projects are these?

Sergei Gorkov: Well, for example, one is a pharmaceuticals project: an infusion solutions plant in Kaluga. We see a way to additionally invest some several million rubles in the project and commission the plant as early as in February.

Another example is a power plant in Tutaev, not far from Rybinsk. Similarly, a small amount of funding is required, about a hundred million rubles, then we could commission the power plant. We are ready to do it before January to get it up and running for the winter season.

Overall, we have more than twenty such projects, which vary in the amount of funding required, with the total for all project financing approximating to 150 billion rubles. All these projects could be commissioned in the next two years. We believe it would be a significant contribution to the national economy at 0.2-0.3% of the GDP.

The projects are spread across thirteen Russian regions, from Khabarovsk to Kaliningrad, and nine industries, in particular, power generation, metallurgy, machine building, agribusiness, pharmaceuticals, and chemicals. According to our estimates, the projects would also generate some 23 thousand new jobs.

Dmitry Medvedev: Well, I believe every endeavor should be made to successfully complete these projects.

On November 14, 2016 State Corporation “Bank for Development and Foreign Economic Affairs (Vnesheconombank)” in accordance with clause 10.2 of Decision on Series BO-11 Bonds Issuance took a decision to purchase Series BO-11 exchange-traded bonds (Individual Registration Number 4В02-11-00004-Т assigned on May 31, 2013) on the following terms:

Terms and procedures of the purchase under call option are set in clause 10.2 of Decision on Series BO-11 Bonds Issuance.

Vnesheconombank's (VEB) Chairman Sergey Gorkov unveiled key priorities in the Bank's new business model during his speech at the parliamentary hearings on the budget in the Federal Council. The Bank will work jointly with the government towards setting funding priorities. This involves a proactive search for projects, activities aimed at development and support of the business-modelling approach and co-financing arrangements.

According to Sergey Gorkov, VEB will focus on the three core areas. Firstly, the “last mile”, including 20 projects in different regions that have been 80-85% financed. Their completion will allow the launch of nearly 20 facilities and ensure 0.1-0.2% GDP growth.

The third priority is to invest in breakthrough innovation sectors related to STI projects.

Speaking about the importance of regional work, Sergey Gorkov pointed out that 99% of all projects are implemented in regions and the Bank has been developing a new model for regional projects. “Our prime focus will be on work with regional development institutions as the major drivers who will assist us in considering investment projects,” he said.

Among the speakers at the parliamentary heatings were Chairman of the Federal Council V. Matvienko, Minister of Finance A. Siluanov, Chairman of the Audit Chamber T. Golikova, First Deputy Governor of the Central Bank of the Russian Federation K. Yudaeva, Deputy Minister of Economic Development A. Vedev.