Contrary to some media reports, no loan agreement has been signed between Vnesheconombank and the Ministry of Treasury and Public Finances of Argentina to finance the construction of the Chihuido I hydroelectric project.

On 29 July 2016, Vnesheconombank held a working meeting with a delegation from the Ministry of Treasury and Public Finances of Argentina. The meeting was also attended by representatives from a consortium of the Argentine construction companies and Inter RAO – Export LLC who were the winning bidders for the Chihuido I hydroelectric project.

The Argentine party presented to Vnesheconombank a number of hydroelectric projects and expressed interest in raising Russian finance. The meeting also discussed the prospects for further cooperation on the Chihuido I project, which provides for supplies of Russian equipment. An agreement was reached that the Argentine party would be supplied with information as to the feasibility of such financing. Support for non-resource exports is one of Vnesheconombank’s core business lines.

State Corporation “Bank for Development and Foreign Economic Affairs (Vnesheconombank)” has transferred, on behalf of the Ministry of Finance of the Russian Federation, to Citibank N.A., London Office, USD 190,651,890 as contemplated by the terms and conditions of the Eurobonds issue.

The payment was made in one currency. 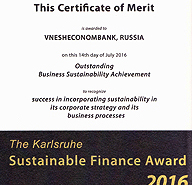 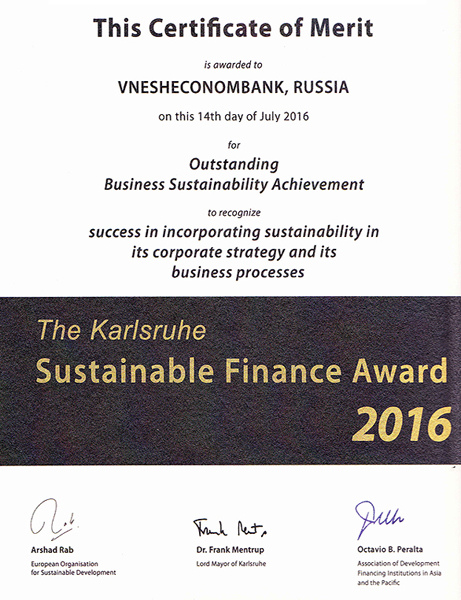 Vnesheconombank has become the winner of the global awards run by the Association of Development Financing Institutions in Asia and the Pacific (ADFIAP) and the European Organization for Sustainable Development (EOSD). The Bank was honored for its Sustainability Roadmap in the category of Outstanding Business Sustainability Achievement.

Vnesheconombank's Sustainability Roadmap was prepared in conformity with global sustainability standards and initiatives and using best practices of foreign financial institutions. The Roadmap provides for a set of measures aimed at improving the Bank’s sustainability competencies to the level of global financial institutions. Integration of the principles established by the Vnesheconombank's Roadmap into the Bank's operations will contribute to the successful delivery of its functions as a national development institution.

The award is the fourth ADFIAP award won by the Bank. The VEB Group's sustainability report 2011 received the ADFIAP award in the 'Best Sustainability Report' category; in 2014, the Bank was awarded a diploma for participation in construction and renovation of small-scale hydro power plants in the Republic of Karelia; in May 2016, Vnesheconombank became the winner in the category 'Infrastructure Development' for its participation in the construction of the Boguchany Hydroelectric Power Plant.

Vnesheconombank has been actively supporting development projects relying on the sustainability principles, established by the Bank to ensure its efficient operation.

The Association of Development Financial Institutions of Asia and Pacific (ADFIAP) was established in 1976. Today, it is one of the biggest global associations comprising 131 member-institutions from 45 countries. Vnesheconombank joined ADFIAP in January 2013 and now is a member of ADFIAP's Board. The Association seeks to coordinate the activities of development financing institutions to secure social and economic development of the region.

The ADFIAP Awards Program started in 1997 when ADFIAP hosted the Summit on Development Finance in Manila. From then on, the awards ceremony has been held annually. The awards recognize both individual and institutional contributions to the national development.

On 19 July 2016, state corporation “Bank for Development and Foreign Economic Affairs (Vnesheconombank)” closed a bid book for its Series PBO-001R-04 stock exchange-traded bond issue. Investors have been offered stock exchange-traded bonds with the total par value of RUB 20bn to be placed in compliance with the Stock Exchange Bond Programme and maturing in three years from the date of placement.

The bid book was opened on 19 July 2016 with the coupon rate initially ranging from 10.50-10.75% p.a. A heightened interest in its stock exchange-traded bonds, which approximated toRUB 35bn, enabled Vnesheconombank to slash the coupon guidance several times. On closing the bid book, the coupon rate was fixed at 10.15% p.a. corresponding to the yield-to-maturity of 10.41%.

Overall, some 50 bids were made by a wide range of investors, of which banks accounted for 38%, asset management and investment companies – 58%, and insurance companies – 4%.

The bonds will be placed on 26 July 2016 through public subscription at the Moscow Stock Exchange.

The issue satisfied the Bank of Russia’s Lombard List requirements.

The National Settlement Depository is the depository of the issue.

Vnesheconombank to sell a shareholding in Gazprom

Today, Vnesheconombank signed agreements with Gazprom Group to sell a shareholding and ADRs in the amount of 3.59% of Gazprom’s authorized capital.

According to Sergey Gorkov, Chairman of Vnesheconombank, the transaction is to significantly enhance VEB’s liquidity.

VEB became a shareholder in Gazprom in late 2008 when the Bank was implementing measures to bolster the economy amid the financial crisis and, in particular, buying securities of Russian companies to support their quotations. In 2007, Vnesheconombank increased its shareholding in Gazprom by 2.7% by acquiring ADRs for ordinary shares in Gazprom from German E.Om.