On 13 July 2016, state corporation “Bank for Development and Foreign Economic Affairs (Vnesheconombank)” closed a bid book for its Series PBO-001R-03 stock exchange-traded bond issue. Investors have been offered stock exchange-traded bonds denominated in US dollars with settlement in Russian rubles with the total par value of $300mn to 500mn to be placed in compliance with the Stock Exchange Bond Programme and maturing in five years from the date of placement.

The bid book opened on 13 July 2016 with the coupon rate initially ranging from 5.50-5.75% p.a. A heightened interest in its stock exchange-traded bonds, which exceeded $1bn, enabled Vnesheconombank to slash the coupon guidance three times when collecting bids. On closing the bid book, the coupon rate was fixed at 4.9% p.a. corresponding to the yield-to-maturity of 4.96%.

Given a strong investor appetite, a decision was taken to increase the size of the offering to $600mn.

Overall, upward of 70 bids were made by a wide range of investors, of which banks accounted for more than 72%, asset management and investment companies – 25% and private investors – some 3%.

The bonds will be placed on 21 July 2016 through public subscription at the Moscow Stock Exchange.

The National Settlement Depository is the depository of the issue.

Nikolay Tsekhomsky, First Deputy Chairman of Vnesheconombank, said, “It is already the third bond placement successfully completed by Vnesheconombank on the domestic bond market this year. Notably, a wide range of local investors have expressed their intense interest in the structure devised for issuing USD-denominated bonds with settlement in Russian rubles. In particular, we have noted an increased interest of private investors in this issue, which is indicative of a great potential of the instrument. This FX denominated bond is a unique innovative instrument at our market that enables local investors to acquire for their portfolio a quality currency asset for Russian rubles and in the Russian jurisdiction”.

VTB Capital, Gazprombank and Sovcombank are the Lead Managers of the issue.

State corporation “Bank for Development and Foreign Economic Affairs (Vnesheconombank)” and a pool of Chinese commercial banks signed a cooperation agreement at INNOPROM-2016 International Industrial Trade Fair in the course of the third Russia-China EXPO in Yekaterinburg. 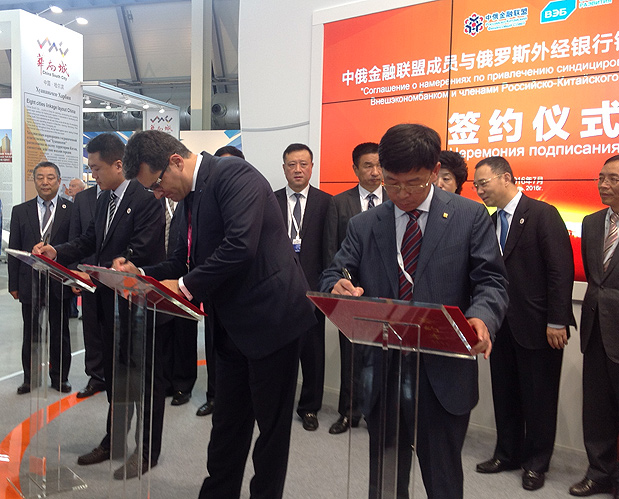 In accordance with the Agreement, Vnesheconombank may raise a 3-year syndicated loanfrom a pool of Chinese commercial banks with a 3-year extension option. The Harbin Bank will act as the Coordinator of the syndicated loan.

The funds can be used to finance Vnesheconombank’s ongoing investment projects irrespective of their Chinese factor (content).

Vnesheconombank’s completing the deal may become a significant milestone in the strategy aimed at building up relationships with Chinese agency banks, primarily, the private ones. Furthermore, it will open up new opportunities for raising mid-term funding abroad in one of the reserve currencies with a view to increasing amounts and extending maturities of such transactions under sanctions.

State corporation “Bank for Development and Foreign Economic Affairs (Vnesheconombank)” and the Ministry of Industry and Trade of the Russian Federation (Minpromtorg) signed a cooperation agreement at INNOPROM-2016 International Industrial Trade Fair. 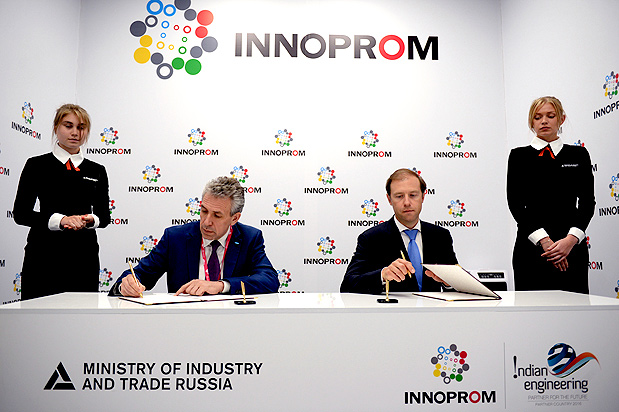 The parties have agreed to cooperate with a view to increasing the volume and quality of lending to businesses engaged in industry and high-tech exports.

Minpromtorg and Vnesheconombank intend to step up their concerted efforts to select investment projects on industrial construction and industrial infrastructure development, in particular, those aiming to boost exports and import substitution. In accordance with the Agreement, such projects may be delivered using a variety of mechanisms and financial instruments of both Vnesheconombank proper and its subsidiaries.

The parties have identified major areas of cooperation, which include creating a favourable environment for investment project finance and lending, attracting long-term financial resources into industry by means of the credit mechanism, etc.

Vnesheconombank published consolidated financial statements of the VEB Group for Q1 2016 as prepared in compliance with IFRS.

Vnesheconombank has elaborated a new Development Strategy for up to 2021 that provides for the development institution to entirely focus on the sectors that are of top priority for the economy, i.e. support for high value - added industries and non-commodity exports, as well as integrated infrastructure development. The Strategy has in principle been approved by the Supervisory Board of Vnesheconombank. Furthermore, the Bank has established a division for problem loans management, as well as a customer service designed to foster VEB’s relations with its customers.

Nikolay Tsekhpmsky, Vnesheconombank’s First Deputy Chairman and Member of the Management Board, has joined the Board of Directors of Concern Kalashnikov (Rostec Corporation) as an independent director.

The decision was approved by the Concern Kalashnikov’s General Meeting of Shareholders. An invitation to join the company’s board of directors was issued on behalf of TransKomplektHolding LLC and a group of the Concern’s private shareholders.