On behalf of Vnesheconombank the Memorandum was signed by Vnesheconombank First Deputy Chairman – Member of the Board Nikolay Tsekhomskyi, on behalf JSC Sukhoi Civil Aircraft – by President Ilya Tarasenko and on behalf of Superjet International S.p.A. – by Executive Director Nazario Cauceglia. 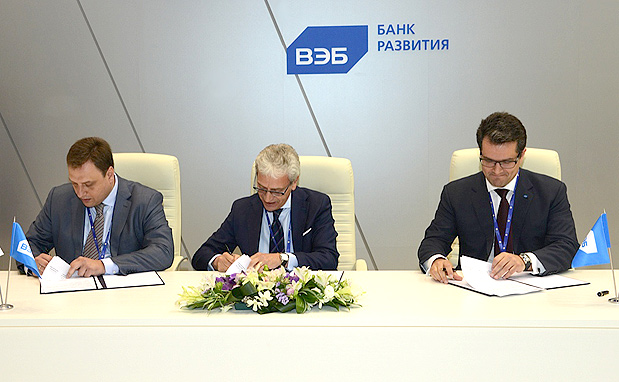 At present, Vnesheconombank continues to be active in funding export supplies of Sukhoi Superjet 100 passenger aircraft. In 2013 – 2016, the Bank participated in funding the supplies of 20 aircraft to Mexican airline ABC Aerolineas SA de C.V. as a member of international banks syndicate organized by Natixis. The project is being implemented with the use of a credit-leasing scheme and insurance coverage by such export-credit agencies as SACE, Coface and JSC EXIAR.

In 2015, the option on purchasing additional ten aircraft by Superjet International S.p.A. was transformed into a firm contract. These supplies are expected to be funded by a syndicate of banks with engaging export-credit agencies in 2016-2017.

Under the Memorandum the parties are to continue their cooperation as part of funding the supplies of the said ten aircraft customized by Superjet International S.p.A.

Under the Memorandum the parties are to explore the possibility of their further cooperation in the civil aviation sector and in maintaining long-term and mutually beneficial relations. In order to implement specific projects individual agreement are to be concluded.

Taking into account that Vnesheconombank is a key partner of Russia’s aviation industry in export contracts, the Memorandum’s implementation would help to promote exports of Russian aviation industry products, create conditions for enhancing and expanding partnership between Russian exporters and international importers of Russian-made aircraft.

On June 2, 2016, there was a meeting of the Arkaim JV LLC creditors. The meeting made a decision to appeal to an Arbitration Court of the Khabarovsk Territory for instituting proceedings in bankruptcy at the wood processing complex of Arkaim.

In the current situation at the company, the decision made is the only chance to save the company as a unified production entity, prevent downsizing and dismissal of workers, ensure the continuation of production cycle and guarantee the company’s workload. The institution of proceedings in bankruptcy is caused by the need to get the company out of the crisis, ensure uninterrupted output of products,transfer tax payment to the Territory’s budget and meet claims by a pool of creditors includingVnesheconombank, Sberbank, Bank Vozrozhdenie, VTB, Rosselkhozbank.

The Arkaim Joint Venture LLC is one of the largest timber processing complexes of the Far East. Its core activity is logging and manufacturing of sawn materials in the Khabarovsk Territory.

The third session of the Working Group on Monitoring the Implementation of Joint Action Plans of Vnesheconombank Group and Supreme Government Executive Authorities of the Russian Constituent Entities was held at Vnesheconombank under the chairmanship of Vnesheconombank Deputy Chairman Irina Makieva. The session was devoted to a comprehensive development of the Rostov region’s territory.

In the attendance of the session were Deputy Governor of the Rostov region Yuri Molodchenko, heads of the region’s line ministries as well as initiators of investment projects.

The joint action plan of Vnesheconombank Group and the Government of the Rostov region for a comprehensive development of the Rostov region’s territory for a period of 2013- 2018 was approved in September of 2013. The Working Group was set up to monitor the implementation of joint action plans of Vnesheconombank Group and supreme government executive authorities of the Russian constituent entities. The Working Group is comprised of Vnesheconombank’s and its subsidiaries’ representatives: JSC The Export Insurance Agency of Russia , LLC The Russian Direct Investment Fund, PJSC Svyaz Bank, JSC GLOBEX BANK, JSC SME Bank, LLC VEB Capital, LLC VEB Engineering , OJSC The Federal Center for Project Finance and OJSC VEB -Leasing.

Vnesheconombank - an agent for the Russian Government – is to be engaged for providing state guarantees.

A decision made is designed toencourage production and sales of Sukhoi Superjet 100 aircraft.

Vnesheconombank releases its quarterly bulletin "Sustainability in DFI and IFO"

Green financing and investment in green infrastructure projects will be a key agenda during China’s presidency in the Group of Twenty (G20) in 2016. (p. 8)

TOWARDS A GREEN ECONOMY FOR RUSSIA

The topic of the latest meeting of The Expert Council of Vneshecnombank was Climate Agreement: New Conditions and Prospects for Business. (p. 24)