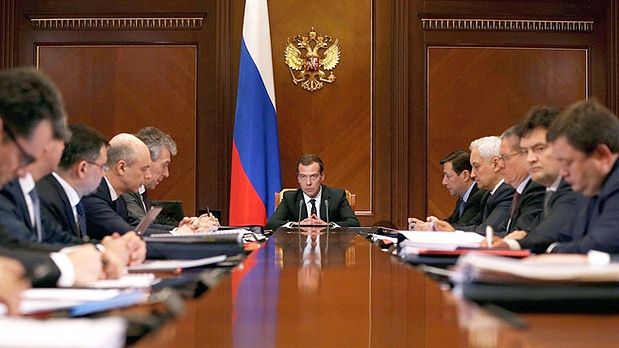 Today’s Vnesheconombank’s Supervisory Board meeting is special because VEB’s management has changed and a whole number of very serious issues are on today’s agenda. The Bank’s new Chairman Sergei Gorkov is participating in the meeting for the first time.

We held a meeting about a month ago to discuss working out a new strategy for Vnesheconombank’s development for a period of up to the 2020. The current action plan which was developed in 2014 has become irrelevant to a great extent for various reasons including worsening foreign economic conditions and our inability to refinance foreign debt. All these factors led to difficulties in the Bank’s activityand exhausted financial strength of the structure.

Now we need to take concrete and at the same time non-standard measures and forge close interaction between all services. Under the conditions of a high debt burden and instability with regard to many macroeconomic positions Vnesheconombank’s new management should establish effective control over implementing projects, conduct a thorough audit, sort out and restructure bad debts, get rid of non-core assets and at the same time sell them at a maximum profit. And of course we should try to use a mechanism of project financing to a greater extent.We should take into account all these factors in VEB’s new strategy. We need to concentrate the Bank’s financial resources on projects associated with modernization of Russia’s economy, import substitution and providing support for non-raw materials exports.

I’d like also to say that despite the current situation we are not going to change general tasks set before VEB. The Bank remains to be a leading development institution and it will continue to fund major projects in various sectors – in manufacturing industry, agriculture, transportation and power engineering. This means that the Bank’s target objectives remain unchanged but if we have to change something in our legislation we are ready to do it.

Today, we’ll discuss approaches to forming the Bank’s budget for the current year including an action plan to boost VEB’s financial stability and streamline its activity. Here I mean additional capitalization, sale of assets, improving decision-making mechanisms with regard to projects, that is, measures for government support and internal measures aimed at improving the Bank’s performance.

I also want to inform you that a decision was made to additionally capitalize Vnesheconombank with 150 billion rubles. In 2016, this money will make it possible to ensure the Bank’s financial stability and enable the Bank to fulfil its obligations on foreign borrowings on capital markets. This decision was taken as part of the Government’s general action plan for ensuring our country’s socio-economic development in the current year.

We’ll also discuss a number of standard and substantive issues related to individual transactions including a whole number of major transactions. Here I mean opening a credit line worth 27.5 billion rubles for Transmashholding. The funds are to be used to fund leasing suppliesof Russian- made carriages to the Moscow Metro. This is a long-term investment project which is also being implemented by way of using financial resources of the National Wealth Fund.

Today’s agenda also covers some other issues including funding the Khrunichev State Research and Production Space Center. We’ll also consider approving a transaction on purchasing by VEB an additional issue of shares of the Federal Corporation for the Development of Small and Medium-Sized Enterprises for a total amount of 30 billion rubles. A 100% stake of SME Bank owned by VEB is to be contributed to this Corporation’s authorized capital. As a result, this Corporation’s capital will increase from 50 to 80 billion rubles.

We’ll also consider funding a whole number of other transactions including the one related to TractornyeZavody Concern and aimed at replenishing current assets.

In conclusion, I’d like to inform you that I signed a resolution aimed at boosting the efficiency of the Russian Export Center, specifically, the Export Insurance Agency of Russia (EXIAR). The fact is that we approved new rules to insure export credits and investments against entrepreneurial and political risks. The changes are designed to support projects on modernizing and creating export-oriented production facilities in our country as well as to develop Russian service and production centers abroad. Moreover, EXIAR’s insurance responsibility limit has been increased to 10 billion dollars.

This is our today’s agenda. Let’s get started.

Vnesheconombank releases its quarterly bulletin "Sustainability in DFI and IFO"

196 countries adopted a new agreement on climate change (that will replace the Kyoto Protocol) at the twenty-first session of the Conference of the Parties (COP 21) to the United Nations Framework Convention on Climate Change (UNFCCC) on 12 December 2015 in Paris. (p.8)

TOWARDS A GREEN ECONOMY FOR RUSSIA

Russia not only prevented the growth of greenhouse gas emission, but also significantly reduced it. (p.11)

The UNEP Inquiry and the Climate Bonds Initiative presented their report "Scaling green bond markets – Guide for the Public Sector" during the COP 21. (p.14)

The new OECD report "Climate Change Mitigation: Policies and Progress" stresses the need for the majority of countries to accelerate their efforts and strengthen their climate change policies to meet their mitigation goals. (p.16)

Vnesheconombank has been named the winner of the 18th Annual Report Competition for the Best Report on Corporate Social Responsibility and Sustainable Development. (p.20)