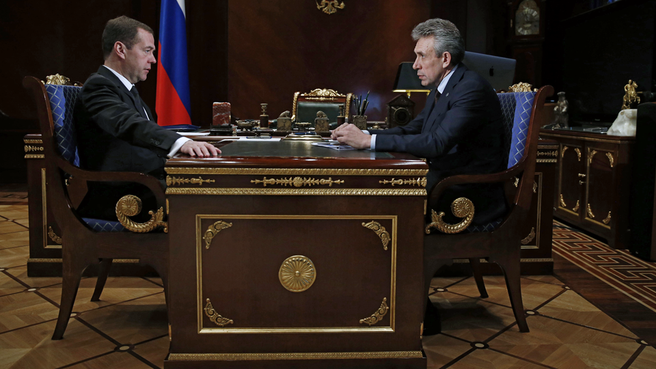 D.Medvedev: Sergei Nikolaevich, we have met each other several times before and discussed the current business situation at Vnesheconombank and prospects for its development. You’ve been appointed Chairman of Vnesheconombank and I wish you every success. The work ahead is not of course easy but you are a very experienced person, well-versed in banking and good at tackling various crises. That is why I hope that you and your team will promote the Bank’s development and help to address problems that have accumulated for many years of its operation as well as develop new approaches, create a more efficient management system and of course accomplish current Vnesheconombank’s financial tasks. I hope you’ll be able to use your business experience in previous positions including your work at Sberbank as you will have to deal with domestic and foreign issues and here I mean foreign assets and the need to hold consultations with foreign credit institutions.

At my request you have already been introduced to the Bank’s team and I hope you’ve already got down to work.

With a view to the fact under applicable legislation our Supervisory Board is comprised of members of the Russian Government and is headed by the Prime Minister I would like to ask you to get down immediately to preparing our next Supervisory Board meeting. We’ll set a date of the meeting but we should not delay because issues are piling up and in a number of cases these issues fall within exclusive competence of VEB’s Supervisory Board and without our decisions you won’t be able to move any further.

And the second and maybe the most important thing is that you should go on working with my colleagues in the Government, with vice premiers, the Finance Minister, the Economic Development Minister on developing a plan for addressing the current economic problems that have accumulated in VEB’s operation and here I mean its additional capitalization and use of other economic instruments to improve its financial and economic indicators as well as effective management of its assets because these assets are different - they were purchased in various situations, at different datesand should be put in order either in terms of their management or in terms of their disposalif VEB’s Supervisory Board finds that asset disposal is an effective method of addressing problems confronted by Vnesheconombank.

I’d like to wish you every success once more I hope that you’ll be able to a form a modern effective team that would address VEB’s most important tasks.

In the end I would like to say that despite the current economic problems and unfavorable foreign economic conditions including the shutting down of capital markets for VEB, Vnesheconombank remains to be our leading development institution and we are going no only to retain it in this capacity but also upgrade it because without such institutionour economy’s efficient full-fledged development is impossible.

S. Gorkov: Dmitry Anatoljevich, thank for your confidence in me. A task to be addressed is formidable and very important for our country. It will take some time to sort out current basic problems. These problems really exist. But I’m sure that with the Government’s assistance we’ll be able to cope with them and create a development institution under the new conditions. There is no doubt that the new conditions are quite different from those that were ten years ago but I’m sure that our new team with the experience gained by the old team will be able to cope with problems with the Government’s and your assistance.

D. Medvedev:Let’s deal with it and discuss now some of the current issues.

Sergey Gorkov has been appointed Chairman of Vnesheconombank

He graduated from the Academy of the Federal Security Service of Russia.

From November 2008 he worked as Director of HR Policy Department at Sberbank of Russia. In October 2010 he was appointed Deputy Chairman of the Executive Board of Sberbank. Previously he held senior positions in major Russian companies.

Sergey Gorkov was awarded the Medal of the Order of Merit for Services to the Fatherland, 2nd class and the Certificate of Honour of the Russian Government.

VEB participates in funding a number of major investment projects on the territory of the Republic of Tatarstan. The Ammonia plant is one of VEB’s largest investment projects with a high innovative component that was implemented on the principles of project finance. The construction of the ammonia, methanol and granulated carbamide production complex started in 2011 from scratch, after JSC Ammonia, consortium of Japanese and Chinese companies - Mitsubishi Heavy Industries, Ltd (MHI, Japan), Sojitz Corporation Ltd (Japan) и China National Chemical Engineering Group Corp (CNCEC, China) signed a turnkey contract for the construction of a combined ammonia, methanol and granulated carbamide production complex. Besides the construction of a new integrated production facility there were plans to reconstruct the functioning production facility to produce ammonia nitrate which is widely used by Russian agricultural producers as a mineral fertilizer.

The project’s total value was 2.2 billion US dollars, with VEB’s participation share being 1.9 billion US dollars. This credit transaction was funded through using borrowed funds provided to Vnesheconombank by such financing institutions as Japan Bank for International Cooperation (JBIC), Sumitomo Mitsui Banking Corporation, Mizuho Bank и The Bank of Tokyo Mitsubishi with the participation of export insurance agency Nippon Export and Investment Insurance (NEXI), Japan on a commercial basis.

In 2015, JSC Ammonia carried out guarantee tests of the integrated production facility. In pursuance of implementing the credit agreement with VEB, contracts were concluded with the world’s leading traders for the sale of carbamide in the amount of 500 thousand tons per year to countries of Europe, Latin America and the Middle East. Export transaction certificates were opened in Vnesheconombank for the said amount of supplies. The new plant’s operational commissioning made it possible to create about 500 new jobs and as a result of the project’s implementation, tax and other mandatory payments were transferred to budgets of all levels and to non-budgetary funds in the amount of more than 1 billion rubles.

Vnesheconombank Chairman Vladimir Dmitriev participated in the ceremony to welcome the first container train as part of the New Silk Road project. The Kaluga-Dalian railway corridor was opened in the course of implementing a major project in the Kaluga region to build advanced facilities of multi-modal transport-logistics infrastructure of Freight Village Rosva logistics park.

Vnesheconombank is the project’s principal creditor.

The Kaluga region Government and Samsung Electronics Co. Ltd (the Republic of Korea) acted as initiators in implementing the Eurasian Silk Road project. The project provides for using the following railway route - the Port of Dalian (the People’s Republic of China) - Zabailkalsk (Russia) – the Kaluga region (Vorsino)instead of shipping route for importing and exporting container freight to Asia. They also propose to use this route for transit freight delivery to Europe through the Kaluga region and to this end they plan to set up a distribution center on the territory of the Freight Village Vorsinoterminal.

Moreover as part of implementing the project “Development of Industrial Parks Infrastructure in the Kaluga Region”: “Forming an Automobile and Auto-Component Manufacturing Cluster”, Vnesheconombank has completed funding engineering preparatory work on creating industrial sites on the territory of the Vorsino industrial park deploy various production facilities of investors under investment agreements concluded by the Kaluga region Government.

The project’s contractor is the Kaluga Region Development Corporation (JSC) (hereinafter – the Corporation). It is an authorized organization in creating and developing industrial parks’ infrastructure.

At present. The total value of costs for developing Vorsino industrial park’s infrastructure is 2 433 million rubles including by funding sources: