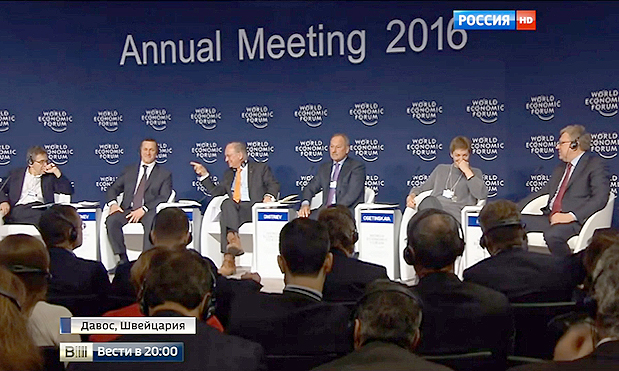 V. A.Dmitriev: “As usual, the Davos Forum’s agenda is extensive and emphasis is as a rule placed on relevant challenges faced by the global community and by individual countries. And in this respect, challenges related to the fourth technological revolution or industrial revolution have a bearing on almost all aspects of our life. Strange as it may seem, this is undoubtedly related to our financial sector, our economic development. As a development institution our bank is interested in the themes on the Forum’s agenda that are related to financial sector and development banks. In this respect, a very interesting session of financial institutions’ leaders was held yesterday - it was devoted to long-term financial resources that are used to fund long-term, expensive large-scale projects”.

V.A.Dmitriev: “We are not downshifters of course. We are a country that is unfortunately developing the way countries that rely on producing and exporting energy resources are developing”

In his address in the course of the workshop “Forecast for Russia”V.Dmitriev said that we needed to try to see trends in our economy. Specifically, he stressed that VEB completed funding 10 major projects worth 800 billion rubles.

n the course of the Forum Vnesheconombank’s Chairman held a number of bilateral with partners from foreign financing institutions.

“Our foreign partners still demonstrate interest in us as a bank for development and in Russia as a whole. Undoubtedly, we use the Davos venue to hold talks with as many of our partners as possible and our discussions show that we as bank for development and Russia as a whole are of interest for them. Because of sanctions some of them do not maintain business relations with us, they do not fund our projects but we maintain contacts at various levels and here I mean not only national financing institutions but also international financing institutions such the European Bank for Reconstruction and Development, the International Finance Corporation, the European Investment Bank. This has never stopped and our conclusion from the conversations we had is that our foreign partners demonstrate their vivid interest in what is going on in Russia as well as their readiness to get down to implementing joint projects with Vnesheconombank in Russia as soon as sanctions are lifted”, said V.Dmitriev in his interview to TV Channel Russia 24. 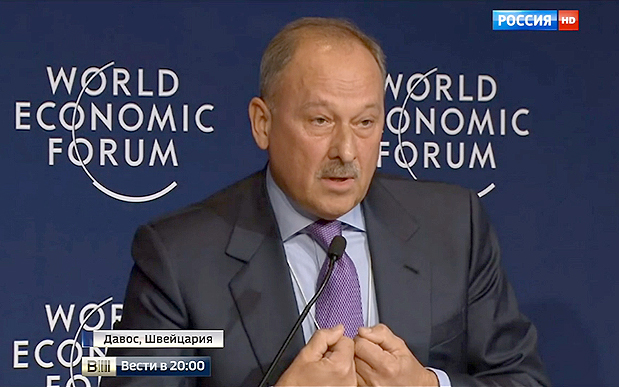 Vnesheconombank participates in the Gaidar forum

Speaking at a panel discussion “Russia and Europe: Economic Prospects” Petr Fradkov said that the need on the part of business for insuring exports to Europe had increased manifold. To my mind, this is not a favorable signal because the need to close this risk even in 2013 or in 2014 was not so significant, it was insignificant. Instruments for insuring political risks did not prevail over other instruments.

Experts placed special emphasis on discussing the connection between the economies of Russia and Europe, they also considered implications of mutual sanctions, conditions and prospects for resetting Russian-European relations in a post-sanction period.

Andrei Klepach took part in an expert discussion “China’s Economy: Potential Scenarios and Strategies for Russia”. In his opinion, Russia’s economy could grow at a rate of 4-5% but we could make it happen if we create a significant export potential and could expand our positions on China’s market substantially. Even if China’s economic growth rate is 5 or 6% it will become a serious driver for Russia’s economic growth.

The Forum’s participants discussed structural causes and long-term implications of China’s slowdown, China’s reaction to integration processes in the Asia-Pacific region and the Trans-Pacific influence on economic growth rates in China. Special emphasis was placed on China’s sectorial markets which are of interest for Russia under the new conditions as well as on raising capital fleeing China.

The Gaidar Forum is a major annual international academic event in economics which is held in Russia. The Forum has been held since 2010 in commemoration of Yegor Gaidar, an outstanding researcher, economist and the architect of Russian reforms of the early 1990s. The Gaidar Forum has become a central political and economic event in Russia. The Gaidar Forum is a unique intellectual venue which unites analysts, experts, the world’s leading researchers and politicians and representatives both of higher financial circles and the global business elite. Its participants discuss economic and political problems and maintain continuous expert dialogue on key political and economic issues, the Forum is designed to highlight main trends and key events of national and global economy and policy and work out strategic proposals and recommendation s for the development of Russian economy. The organizers of the Forum are the Russian Presidential Academy of National Economy and Public Administration and the Gaidar Institute for Economic Policy and the Egor Guidar Fund.