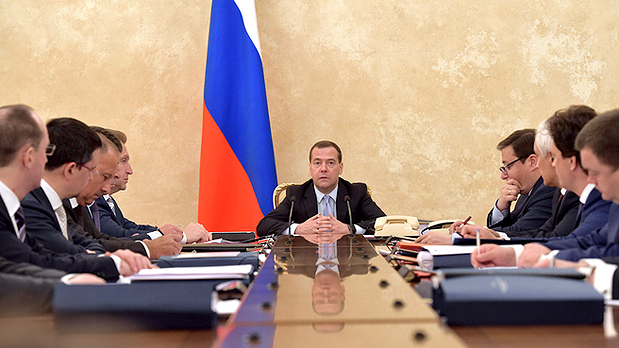 Today we are having a regular meeting of our Supervisory Board. Our agenda is as usual overcrowded. We are supposed to take corporative decisions.

Now, VEB’s main task is to increase the amounts offunding the real economy with a view to the current economic problems,the slump in production.Figures vary, but some of them are alarming. Under the conditions when the Russian banking systemis under the pressure of a number of negative factors, VEB must retain its position as a key development financing institution responsible forindustrial sector, major projects and investments.

For the Bank to operate in these lines of activity most efficiency, the Bank was provided with additional funds and a decision was taken to place 300 billion rubles from the National Wealth Fund on VEB’s deposits. We hope that this will help the Bank to undertake its business activity.

I would also like to stress that we should exercise maximum control over the use of financial resources from the National Wealth Fund – they are our reserves. Conditions for receiving this money have been established in the strictest way. Specialists are to be responsible for a preliminary selection of projects and a final decision is to be made at a meeting of VEB’s Supervisory Board. Every three months, the Bank is to account for spending this money.

A detailed procedure for selecting such projects is to be prepared in the most immediate future and it is to be considered at an upcoming meeting of VEB’s Supervisory Board.

A number of projects we’ll consider today are also designed to boost the industrial sector. We’ll also discuss VEB’s guarantees worth 3 billion dollars under the Yamal LNG Project. This project provides for building liquefied natural gas production facilities and a whole infrastructure - a decision that was also approved by the Government- and here I mean the Port of Sabetta and some other important facilities. The project is important for expanding our export capabilities and developing Northern territories.

Another infrastructure project funded by Vnesheconombank is the construction of Moscow –Saint Petersburg high-speed multilane motorway. This is one of the first public private partnership projects and in this case the Bank is a party to a concession agreementtogether with other government institutions and private investors.

Moreover, we’ll discuss projects in aviation and mechanical engineering industries, agro-machinery industry and in radio electronics. We’ll also talk about the work with pension savings, which are under the Bank’s management. Pensionmoney is used to fund investment projects of the largest Russian companies. We should determine conditions for such transactions this year to not only invest the money reliably but also put them profitably in the projects we have discussed with you.

Let’s get down to work.

Origin: Internet-site of the Government of the Russian Government

V. Dmitriev: We’ve just finished a regular meeting of Vnesheconombank’s Supervisory Board. The agenda was pretty intensivebut it should be stressed that the Russian Prime Minister, the Chairman of Vnesheconombank’s Supervisory Board, said that it was necessary to exercise strict control over a targeted use of funds worth 300 billion rubles allocated from the National Wealth Fund (NWF) to finance individual investment projects of Vnesheconombank. Funds are to be allocated under a decision by VEB’s Supervisory Board in accordance with the Memorandum on the Bank’s Financial Policy and under the Law for the Bank for Development. In this respect, it should be stressed that the projects we have considered today might be financed with funds from the National Wealth Fund.

Today, we have discussed projects in infrastructure and aviation industry. We also discussed an opportunity for the State Managing Company to allocate funds to finance investmentprojects of some Russian companies.

Our Bank is to fund the Moscow- Saint Petersburg motorway (a segment at the crossing of the Leningrad region with adjacent regions, 100 km plus); our participation share is 6.5 billion rubles. We’ll receive funds by way of issuing bonds which are to be bought out by VTB pension fund. Here we are in close contact with VTB itself, which acts in the capacity of an investor.

Today, our Supervisory Board approved a bridge credit to be extended for the SukhoiSuperjet 100 project to implement the President’s decision to allocate 100 billion rubles worth of bonds to this company, with the bonds to be bought out in the future by commercial banks, that is, this company’s creditors including Vnesheconombank.Now we suggest above allconverting foreign currency credits into ruble ones and then repaying them through using funds to be allocated by the state. The current transaction is worth 32.5 billion rubles.

V. Dmitriev: By way of using funds of the state managing company. Bonds of such issuers as the Post of Russia, VEB-Leasing and other several companies are also supposed to be bought out.

I’d also like to draw your attention to a project that we have been funding for several years and now it is entering its final stage, this is a project to manufacture microchips in size of 0.9-0.12 nanometers. This project is being implemented by AngstremCompany in Zelenograd. In the near future the project is to be put into a test operation mode. And we hope that by the end of the year this project will be launched and it will gradually achieve its rated capacity. There is a feeling that it will become a part of special economic zone of Zelenograd to enjoy benefits stipulated for this kind of projects. Pending the Petersburg Economic Forum we agreed upon nominees of the Development Award at a meeting of our Supervisory Board. This year there will four more nominees. These are projects in providing support for exports, the best projects with foreign participation and projects in environmental protection ( I am not going to name the winners in advance, we’ll get to know their names at the Petersburg Economic Forum).

We have also discussed some technical issues related to the operation of Vnesheconombank’s internal control service in various lines of the Bank’s activity.

As far as the Yamal LNG project is concerned Ibelieve that atimely and important decision was made that Vnesheconombank would extend guarantees worth 3 billion dollars. We held preliminary talks with Novatek about a credit worth 1 billion dollars to be extended by Vnesheconombank but now the amount of risks we assume in the project, factually in Novatek has increased threefold. We hope that there will be no need for ready cash. This decision was a matter of great urgency because we had to complete negotiations with Novatek’s foreign partners – these are both Chinese and French companies that are also assuming risks in the project.So, this is a key stage in coming close to signing a comprehensive agreement on the construction of a liquefied natural gas plant.

Question: This means that there will be no hard cash?

V. Dmitriev: No, there will be guarantees.

Question: You said that you need 3 billion dollars to fund foreign debts and that the Government would not provide this money. Where will you take it from? On the market? Have you already found sources?

V. Dmitriev: Yes, on the market.

Question: What will be the amount of bridge-credit for the SukhoiSuperejet 100?

Question: What about its tenure?

V. Dmitriev: A tenure of half a year but we hope that as soon as a scheme for extending 100 billion rubles worth of bonds and for buying them out in the future by commercial banks is implemented the credit will be repaid. Half a year is a maximum period but I think it might take three months.

Vnesheconombank and the Vietnam Development Bank Agree to Cooperate

In the course of the 38th Annual Meeting of the Association of Development Financing Institutions in Asia and the Pacific (ADFIAP) being held in the city of NhaTrang (Vietnam), Vnesheconombank and the Vietnam Development Bank signed a Memorandum of Understanding.

On behalf of VEBthe Memorandum was signed by Deputy Chairman Anatoly Ballo and on behalf of the Vietnam Development Bank – by Director General Tran Ba Huan.

The Memorandum provides for enhancing all-round cooperation, the two banks’ joint participation in implementing investment projects, and in programs of trade and export financing as well as sharing experience on main lines of the two development institutions’ activity.

The Memorandum’s implementation would help to promote exports of Russian products to Asian countries and enhance economic ties between Russia and Vietnam.

Vietnam Development Bank (VDB) was established in 2006 according to the Decision of the Prime Minister of Vietnam based on the reorganization of Development Assistance Fund. The bank’s main function is to raise capital from domestic and foreign counteragents to pursue investment, credit and export policy of the state as well as expand international cooperation. The bank is responsible for funding major government projects by way of extending subsidies, investment and export credits as well as credits against government guarantees.