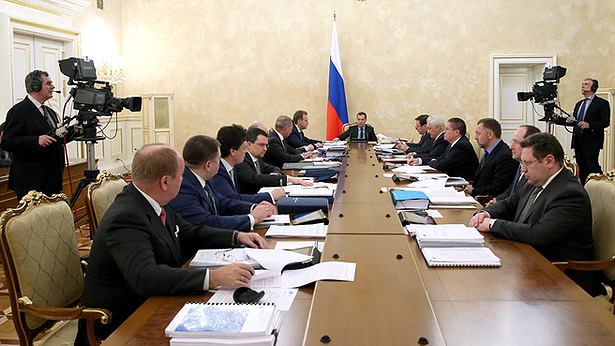 I’d like to start with some introductory remarks without going into specific issues of our extensive agenda. Vnesheconombank as it is seen from its Supervisory Board composition is not only a key development institution but it is also built in the Government’s program of anti-crisis measures. The Bank is actively involved in carrying out a plan of high-priority measures to ensure sustainable economic development and this might be one of its most important functions now. The more so, VEB is experienced in operating under crisis conditions, here I mean a period of 2008-2009 when the Bank participatedin carrying out virtually all anti-crisis measures – it supported banks that suffered fromliquidity issues then, operated on the stock market and helped Russian companies to refinance their foreign debt obligations.

And at the current stage the Bank’s main goal remains to be funding of the real economyon acceptable terms and above all projects to develop import substitution production facilities especially those associated with products and services that are needed for normal operation of enterprises that came under sanctions.

System-forming enterprises are also in need of the state’s large-scale support,that is,large and very large enterprises, small and medium-sized enterprises, above all in the regions with complicated economic situation including mono-cities. It’s very important to provide increased guarantee and insurance support for Russian exporters of high technology and non-raw materials products.

Moreover, one of the most important objectives continues to be providing support for Russian exports for them to be more competitive and to be in demand on new markets. So, enterprises that have high export potential and are ready for this sort of activity should be given a chance to receive credits on a preferential basis. To engage in all these activities, VEB must operate in the most efficient way and it was for this reason we discussed an issue of the Bank’s additional capitalization and of funding its operations.Relevant decisions have been already made on this score including as part of the government plan for top-priority measures. I hope that all these decisions will be implemented in due time.

Today we’ll discuss quite a few projects and take appropriate decisions in his respect.

Moscow. April 2. INTERFAX - Funds for VEB’s additional capitalization as part of the government’s anti-crisis plan are to be allocated by the end of the current year, said VEB Chairman Vladimir Dmitriev.

“Funds are most likely to be allocated by the end of the year”, V. Dmitriev said to journalists on Thursday.

“All decisions remain unchanged and funds will be allocated”, said Vnesheconombank’s Chairman.

“There is a decision that VEB will be provided with 300 billion rubles from the NationalWealth Fund to support its charter activity. This decision remains unchanged is not to be discussed”, said V. Dmitriev.

VEB to purchase bonds of the Federal Grid Company (FGC)

MOSCOW April 2 (Reuter) – State Corporation Vnesheconombank has agreed to purchase bonds of the Federal Grid Company – operator of the Unified National Electricity Grid for an amount of 40 billion rubles from pension funds thus handing over money to it for investments, said Vnesheconombank Chairman Vladimir Dmitriev to journalist on Thursday.

“We made a decision to purchase this company’s bondsfor its investment activity for a period of 30 years”, Dmitriev said.

FGC’s investment program for 2015-2019 approved by the Energy Ministry is worth 564 billion rubles but the company is considering reducing it because of the crisis. According to Rosset Holding, FGC investments could fall 42 percent to 325.5 billion rubles.

FGC has already placed the so-called infrastructure bonds in 2013 for an amount 100 billion rubles, which were bought out by Vnesheconombank.

The company also asked the Government to provide it with funds to implement grid infrastructure projects for BAM and Transsib.

According to Dmitriev the Bank received only one request of FGC for receiving this money as well as indicative proposals from a number of companies including Kamaz.

Given funds and possibilities, and in case of receiving appropriate requests from companies, issues of buying out their bonds will be submitted to consideration by VEB’s Supervisory Board.

VEB Chairman Vladimir Dmitriev said that the Bank had made a decision concerning methods of working with companies in offshore zones under anti-corruption legislation.

“A decision was made concerning methods of working with companies in offshore zones under anti-corruption legislation, he said on Thursday after a meeting of VEB’s Supervisory Board.

Moscow. April. INTERFAX – Investors of Olympic facilities in Sochi are to be granted the right to spend 20% of receipts for their development – a relevant decision was approved by Vnesheconombank’s (VEB’s)Supervisory Board on Thursday.

VEB Chairman Vladimir Dmitriev told journalists that a decision had been taken that 20% from a free cash flow with regardto Olympic borrowers will be allocated to perform tasks associated with capital construction, that is, car parks, development of resort zones.

“We have discussed several issues associated with the Sochi Olympics. We consolidated debts of RogSibAl(a part of Oleg Deripaska’sBasEl) a hotel and a cargo port (LLC the Sochi Imeretinsky port). We earmark additional funds for the companyto settle with its creditors and start restructuringlike all other companies”, said Dmitriev.

“That is, everything that is needed to boost investment appeal of these projects and toincrease tourist flow”, he said.

Moscow.April 2. INTERFAX – Vnesheconombank’s Supervisory Board made decisions at its meeting on Thursday on a number of charitable issues including providing support for ROC, said Vnesheconombank Chairman Vladimir Dmitriev.

“We discussed and our Supervisory Board approved a number of charitable issues associated with providing support for the Russian Orthodox Church”, V. Dmitriev said to journalists after the meeting of VEB’s Supervisory Board.

Vnesheconombank Chairman Vladimir Dmitriev handed over a certificate worth 500 thousand euros in the city of Banja Luka to the President of the Republic of Serbian Bosnia and Herzegovina for flood relief in the region.

A decision to provide funds was made by the Bank’s Supervisory Board in December of 2014 after MiloradDodik appealed for aid. The money is to be used to reconstruct a hospital in the Serbian city ofSamac.

As a result of floods that occurred in August of 2014, the region suffered economic damage worth about 1 billion euros. Floods and rains destroyed hundreds of buildings and houses as well as dozens of bridges and automobile roads.