The Boguchan Hydro Power Station Opened in the Krasnoyarsk Territory

In the course of the telebridge between the city of Moscow and the city of Kodinsk of the Krasnoyarsk Territory there was a formal ceremonyto launch the Boguchan hydro power station.

The project’s implementation would promote the region’s socio-economic development. At present, more than 500 people work at the power station. Tax revenues in budgets of all levels are expected to amount to 2 billion a year after the Boguchan power station achieves planned operational targets.

We discussed a number of projects funded by the Bank in aviation, automobile, space and housing construction industries. 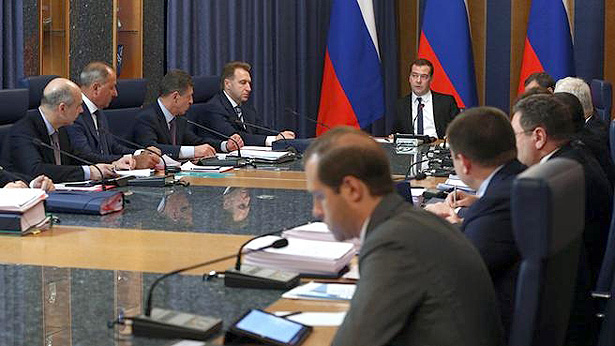 This year we are holding our final meeting of VEB’s Supervisory Board and as usual, we have a very intensive agenda. On the one hand,it’s good that we work hard but on the other hand we have toactually regulate this work. So, I have a proposal for the future: we should draw up a clear-cut schedule of meetings for us to be able to prepare issues despite the number of them - there might be 50 or five issues- having in mind that in the second or third decade of a month we are sure to have a meeting of VEB’s Supervisory Board. This will prevent issues from building up, as is the case now. Vladimir Alexandrovich please think about how you can organize all this with your colleagues from the RF Government Office.

Before moving to our scheduled agenda, I would like to congratulate the entire Bank’s team on its 90th anniversary. The most important thing for the Bank is its reputation and professionalism of its employees. And VEB has been building up its business reputation since December 16, 1924, when the Council of People’s Commissars decreed to establish a bank for foreign trade.

I’d like to say that during this period the Bank had to perform various functions, it was renamed several times, nevertheless the Bank demonstrated its ability to transform taking intoaccount market specifics and proved its reliability as an effective operator of government crisis management programs and the crises unfortunately happened regularlyin the history of our country. Basically, VEB has always been a bank for development and it has done a lot. I’d like to highlight VEB’s participation in the most important event of the outgoing year – the Winter Olympic Games in Sochi where VDEB’s role was maximal.

As of early December, VEB is involved in funding more than 150 investment projects. Vnesheconombank’s strategy for a period of up to 2020 that was approved two years ago provides for VEB’s loan portfolio to increase to 2.5 trillion rubles by 2020. Special emphasis is to be placed on extending credits to small and medium-sized enterprises and on developing import-substituting production facilities as well as on supporting domestic producers of quality and competitive products.

By the way, we have several such issues on our agenda today including projects in aviation, automobile and space industries as well as a number of issues associated with the use of Olympic facilities including a transfer of a number of facilities for the needs of children’s sports and children’s education as a whole. The sports complex was built with VEB’s participation.

Another issue is related to funding housing construction under the program “Housing for the Russian Family”. Here I mean two credit lines worth more than 50 billion rubles to be opened for the program’s operator – the Housing Mortgage Lending Agency. I’d like to remind you that under this program at least. 25 million square meters of economy class housing are to be built. This housing is intended for families with many children and for low-income families as well as for resettlement of people from shabby and dilapidated housing stock. These are noble aims and I hope they will be achieved.

As the Bank is nowadays marking its 90th anniversary,I’ve brought along a gift for it – I signed a government resolution oregulations on extending subsidies from the federal budget in the form of asset contribution to State Corporation Vnesheconombank. Now, under these regulations, the Finance Ministry can enter into an agreement on funding the asset contribution for the year 2014 in the amount of 30 billion rubles. So, Anton Germanovich (Siluanov)attend to this matter. We must do it.

Origin: Internet –site of the Government of the Russian Federation

“A decision was made to additionally capitalize Russian subsidiary banks through subordinated loans and through direct capital” he said adding that he meant Svyaz-Bank and Bank GLOBEX.

He explained that in case of GLOBEX its capitalization through subordinated loans and direct capital was distributed in equal parts of 5 billion rubles.

VEB to additionally capitalize its Ukrainian subsidiary Prominvestbank with $300 million

“A decision was made to additionally capitalize Prominvestbank with 300 million dollars”, Dmitriev told journalists.

He added that the bank’s capital would be increased by converting Prominvestbank’s debts to Vnesheconombank into corresponding capital.

Earlier Dmitriev said that VEB would not scale down its business in Ukraine and confirmed plans to additionally capitalizeProminvestbank. He said that the bank acted traditionally as one of the largest creditors of real economy in Ukraine and that it holds private deposits.

“A principal decision was made to increase financial support for the Ford-Sollers project”, he said adding that the two sideshaven’t come close to a concrete deal yet. But basic parameters of this deal have been approved and VEB plans to work with Ford-Sollers to develop production.

The Khrunichev Center to receive 37 billion rubles from VEB

“The Khrunichev rocket-building center is also to receive Vnesheconombank’s financial support in the amount of 37 billion rubles”, Dmitriev told journalists.

Vnesheconombank Chairman Vladimir Dmitriev said that the company was in a difficult situationbut Vnesheconombank made such a decision in view of its new management, restructuring and enhanced corporate procedures.

V.Dmitriev said that the funds would be contributedto SCA’s charter capital.

Moscow. December 18. INTERFAX.RU – Vnesheconombank Chairman Vladimir Dmitriev said that VEB’s Supervisory Board made a decision to change a supervisory owner of the of the KrasnayaPolyana Olympic facility in Sochi, the main owner of which is Sberbank.

“We (with Sberbank’s Head German Gref) discussed projects related to the Olympic legacy and as far as a number of projects are concerned we made a decision to change a beneficiary”, Dmitriev told journalists on Thursday.

An issue of the Krasnaya Polyana facility, the beneficiary of which is Sberbank and the decision to change its beneficiary required the presence of the President and Sberbank’sBoard Chairman.

“We discussed an issue of transferring the asset from one shareholder to another”, said Dmitriev adding that he meant a transfer of the Krasnaya Polyana into the ownership of institutions, whiсh are related to the Krasnodar Territory.

Moscow. December 18. INTERFAX – Prime Minister Dmitry Medvedev said that two credit lines worth 50 billion rubles were to be opened for the Housing Mortgage Lending Agency (HMLA) under the program “Housing for the Russian Family”.

“Two credit lines in the total amount of 50 billion rubles are to be opened for the program’s operator - the Housing Mortgage Lending Agency”, said D. Medvedev after Vnesheconombank’s Supervisory Board end of the year meeting on Thursday night.

He said that under this program at least 25 million square meters of economy class housing were to be built.

“Basically,this housing is intended for families with many children and for low-income families as well as for resettlement of people from shabby and dilapidated housing stock. These are noble aims and I hope they will be achieved”, the Premier said.

In his turn, Vnesheconombank Chairman Vladimir Dmitriev told journalists that the amount of financial support for HMLA would be about 55 billion rubles.

V. Dmitriev said that the funds would be used to fund companies being created by the Agency. The companies are to be responsible for creating infrastructure for the construction of affordable and comfortable housing.

“This is something we haven’t had so far and it was an obstacle to funding developers under concrete projects. Here I mean lands managed by housing and public utilities,which cease to be included in the federal property. Infrastructure is to be formed on these lands, which would make it possible for developers to apply for funding to implement affordable housing construction projects”, said V. Dmitriev.

Moscow, December 18. /TASS/. Petr Fradkov who was in the recent past Director General of the Export Insurance Agency of Russia (EXIAR) became another Vnesheconombank’s first deputy chairman.

Dmitriev said that one of VEB’s top-priority lines of activity was to support industrial exports. “And it was for this reason we introduced a post of third, first deputy chairman.Petr Fradkov is to hold this post”, he said.

Alexei Typanov is to take up a post of EXIAR Director General. He was Fradkov’s deputy at EXIAR. All this is being done to retain continuity and enhance Vnesheconombank interaction with an export credit and insurance center to be created – Roseximbank and EXIAR”, he explained. 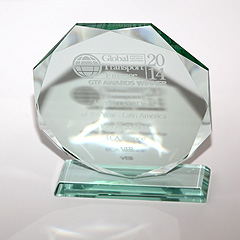 Vnesheconombank together with the consortium of international banks (Natixis, France;IntesaSanpaoloSpA, Italy; Deutsche Bank SpA, Italy and Deutsche Bank AG, Germany) were presented with awards for participating in the transaction to extend syndicated loans to fund the supplies of SukhoiSuperjet 100 aircraft to Mexico’s largest airline Interjet (ABC Aerolineas, SA DE CV). The Gala Awards Ceremony was held in London on December 8, 2014.

This sort of deals when a Russian bank participates in the consortium of international banks to fund supplies to a third country are unique for the Russian financial market.In total, the Mexican airline is to purchase 20 aircraft and an additional option was signed for another 10 aircraft.

Providing support for Russia’s aircraft construction companies is one of the Bank for Development’s main lines of activity. VEB became a leading partner as part of the projects to export Russian SukhoiSuperjet 100 aircraft.

The Aircraft Finance Innovator of the Year 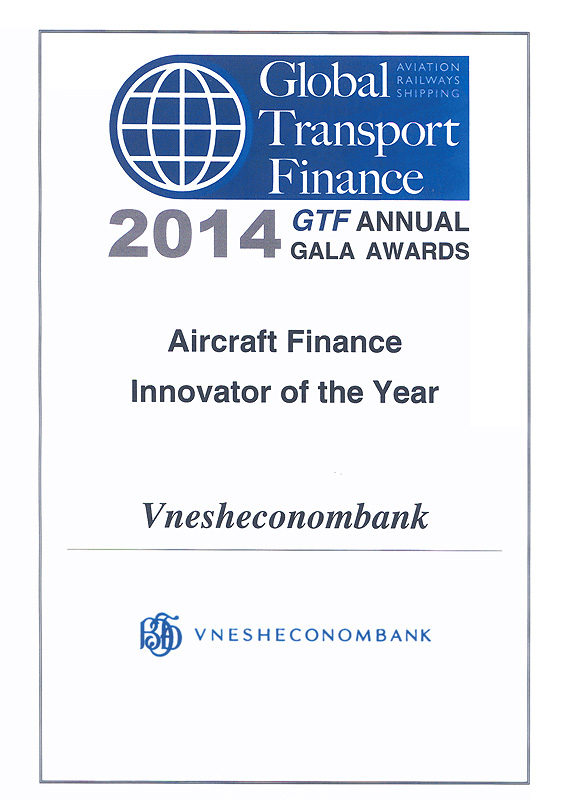 The Aircraft Debt Deal of the Year – Latin America 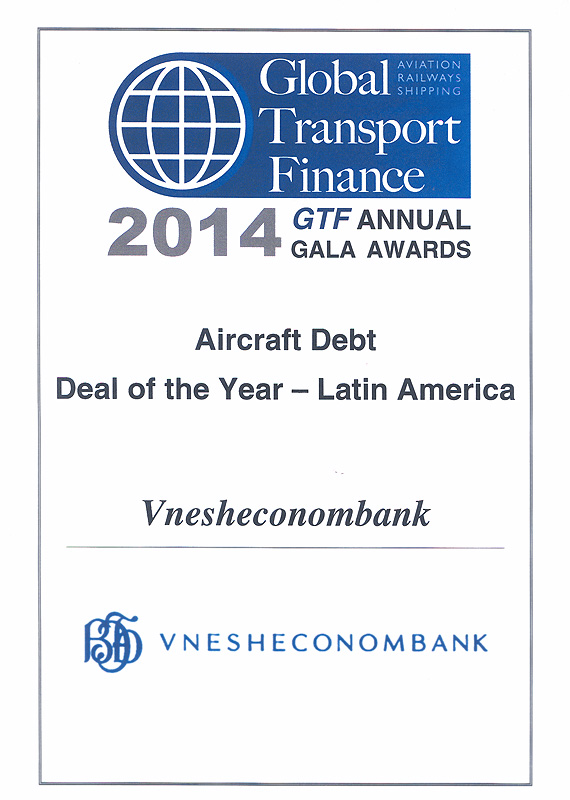 Vnesheconombanktook ninth place in the rating of the World’s Safest Banks in Central and Eastern Europe published by Global Finance Magazine. The safest banks were selected through an evaluation of long-term credit ratings – from Moody’s, Standard & Poor’s and Fitch and total assets.Places in the rating were also assigned to Russian Sberbank and VTB, they took8th and 9th places in the rating respectively.

Winners were selected through an evaluation of the 500 largest banks of the region.The rating is published by the magazine annually.

Global Finance is a monthly magazine founded in 1987 with its headquarters in New York (the US) publishing articles on finance and investments.

According to the 2014 National Procurement Transparency Rating, State Corporation ‘Bank for Development and Foreign Economic Affairs (Vnesheconombank)’ was given first place in the category “High Transparency” among customers placing orders under Federal Law № 223-FZ.

Vnesheconombank received relevant certificate that certifies its high transparency in the corporate procurement sector. In order to evaluate procurers placing orders under Federal Law № 223-FZ, they used data on the extent of a company’s information disclosure and due process with regard to its procurement activity including availability of information on rules for conducting procedures, scheduled procurements, forthcoming tenders and concluded contracts on the participant’s official site and other open sources as well as data on the extent of using competitive procedures.

The National Procurement Transparency Rating is an annual project of the National Association of E-Trade Participants. The rating has been held since 2005 with the assistance of the Federal Anti-Monopoly Service (FAS), the Economic Development Ministry,the Russian Audit Chamber, the Russian Commerce and Industry Chamber,relevant committees of the State Duma.

The object of the study is the Russian market for government and commercial procurements, it is designed to produce transparency rating among executive authorities, regional and municipal customers as well as the largest state-run and private companies.