Two sources familiar with the course of the meeting told Interfax on Tuesday night that a decision had been made to commit 30 billion rubles to VEB to maintain liquidity. V.Dmitriev confirmed this figure.

“The decisions made would allow VEB to rely on a systemic and sustainable state support which would ensure through measures being taken including the first stage in the amount of at least 30 billion rubles the Bank’s dynamic development and would enable it to meet basic financial sustainability standards. These measures are designed to enable the Bank to meet its obligations to Russian and foreign creditors and investors and increase volumes of its credits to fund nationally significant investment projects, support exportsand small and medium-sized enterprises”, said V.Dmitriev.

In response to a request to comment on mass media information about VEB’s potential sale of3.15% of RusAl’s shares:At present, we are not discussing an issue of selling blocks of shares or other non-liquid assets owned by VEB. VEB didn’t announced such initiatives because it is fully aware that their sale at market prices will be lossmaking. Kommersant reported on Tuesday with reference to its sources that VEB could sell its stake in RusAl to increase its capital. Russian depository receipts for shares of the company lost 8.4% at a trading session on fears that VEB’s stake will be sold.

Today, our meeting is devoted to Vnesheconombankand issues related to its current standing and its potential additional capitalization. Naturally, the reason for it is that Vnesheconombank is a leading and the most important development institution in our country operating under a special law.It commits financial resources for modernizing the Russian economy and stimulating inflow of investments. The Bank plays a special role on the long-term funding market.

In the recent years, Vnesheconombank has been instrumental in implementing quite a few large-scale projects, which are designed to overcome infrastructure restrictions, boost natural resources utilization efficiency, support industrial exports, stimulate the development of territorial clusters and as a whole address serious objectives of the country’s development.

I’d like to mention such important projects as the construction of the Boguchan Hydroelectric Power Plant as well as Sheremetjevo-3 and Pulkovo terminals, the Western High-Speed Diameter, the Khabarovsk oil refinery's modernization, the development and manufacturing of our SukhoiSuperjet 100.

Moreover, Vnesheconombank became a major creditor of a whole number of construction projects including the Olympic construction project. Its efficient financial support helped to successfully implement infrastructure projects in Sochi although in a number of cases we had to make pretty difficult decisions and Vnesheconombank had to make such difficult decisions too.

In general, we should admit that the Bank’s participation in this kind of projects was necessary and justified.Until recently, the Bank has succeeded in raising credit facilities on international markets to fund investment projects. Now, as you know, the situation has changed – our partners not only refuse to participate in this kind of projects but limit activities of a number of banks. Nevertheless, Vnesheconombank remains to be a quality borrower and an efficient creditor.There is a need for Vnesheconombankto maintain required volumes of support for the national economy in the current situation when the country’s economic policy relies above all on domestic sources of funding” and on such approaches which should allow us to create advanced, quality products and support exports. All this is of primary importance now, so my proposal is to discuss these issues today at our meeting.

Origin: Internet-Site of the Government of the Russian Federation

In the course of the 13th International Investment Forum Solchi-2014б Vnesheconombank Chairman Vladimir Dmitriev spoke at the following panel discussions: “How to better understand China and Russia’s housing and utilities: New conditions for private investing”. 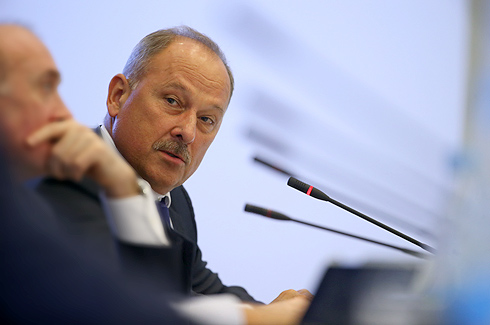 In the course of the Forum Vnesheconombank Group’s institutions entered into the following agreements:

The Federal Project Finance Center (FPFC, Vnesheconombank Group) and LLC Plaza Hotel signed an agreement of Intent to form an investment project “Construction of a Tourist Camping-Park “KazachyaStanitsa. It is to be prepared by a partnership established by the parties. Under the project, they plan to operate a multifunctional campingб which does not have any analogues in the region. It is to be comprised of a bio park, sports park, fair and festival zone, camping and 2parkings.

The Federal Project Finance Center and OJSC the Khabarovsk Energy Systems signed an agreement of intent to form investment projects on the comprehensive development of heat and energy supplyыныеуьы in the Khabarovsk Territory. The agreement provides for preparing projects to reconstruct and construct energy sources to transfer to gas fuel and reconstructing distribution networks in municipal districts. To this end, the parties to the agreement are to prepare a Plan for Comprehensive Development of the Heat Supply System in the Khabarovsk Territory and make efforts to search for and engage investors and partners to implement the project.

In the course of the 13th International Investment Forum Sochi-2014, Vnesheconombank, the Government of Dagestan, the Russian Direct Investment Fund (RDIF, VEB Group), OJSC the Caspian Flat Glass Plant entered into an agreement of intent to cooperate in enhancing investment activity.

On behalf of Vnesheconombank the agreement was signed by Chairman Vladimir Dmitriev. 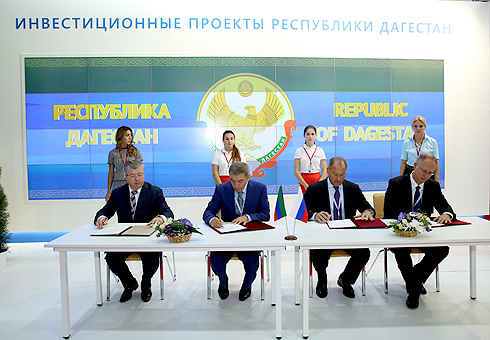 VEB is the main creditor of the project on the construction of a flat glass plant on the territory of the Republic of Dagestan (the village of Tube, the Kumtorkalin district).

In its turn, RDIF (VEB Group) is exploring the possibility of investing funds in a major manufacturer of glass products. Investments to be raised could be used by OJSC the Caspian Flat Glass Plant for purchasing and commissioning high technology equipment to manufacture high-value added products that do not have national analogues and have a high export potential.

The parties have agreed to cooperate in advancing the project, the implementation of which would contribute to Dagestan’s socio-economic development and would give an impetus for the development of the entire region.

The project on the construction of the Caspian flat glass plant provides for creating an advanced high technology production facility to manufacture transparent glass, tinted glass and reflective glass by float method with a capacity of 600 tons a day. The plant’s construction total value is 10.5 billion rubles, with VEDB’s participation share being 7.8 billion rubles. The project gives high priority to both import substitution and to export of up to 40% of products including to CIS countries. At present, the project’s main production facilities have been put into operation, the plant is now at the stage of achieving rated capacities.

In the course of the International Investment Forum Sochi-2014, State Corporation ‘Bank for Development and Foreign Economic Affairs (Vnesheconombank)’ and OJSC Sberbank of Russia signed an agreement on cooperation to enhance and support Russian exports.

The agreement sets forth main lines and principles of cooperation between VEB and Sberbank in implementing Russian companies’ export projects including raising funds to finance them. The agreement’s implementation would help to strengthen export potential of Russian producers of innovation and high technology products, diversify national export of products, services and technologies as well as make Russian companies more competitive on the world’s market.