They discussed major projects funded by the Bank, fulfilling instructions, which were given by VEB’s Supervisory Board as well as the work in mono-cities. 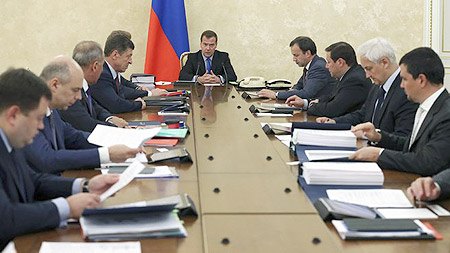 Dear distinguished colleagues, today, we are holding VEB’s Supervisory Board regular meeting with a wide range of issues dealing with internal documents, various competitions, reporting on some projects funded by the Bank and fulfilling instructions given by VEB’s Supervisory Board. We are bound to discuss all these issues today.

Moreover, there is also a proposal to make additions to our agenda dealing with the work in mono-cities. This proposal was made by Andrei Belousov. We’ll discuss it now, set our agenda and get down to work.

An annual meeting of heads of partner banks on the BRICS interbank cooperation mechanism timed to coincide with the BRICS Heads of State Summit and a Final BRICS Forum took place in the city of Fortaleza (Brazil). Vnesheconombank Chairman Vladimir Dmitriev participated in these events.

Speaking at the Financial Forum Vladimir Dmitriev said that by having ratings in line with sovereign ones, BRICS countries financial development institutions can raise funds on the foreign markets on favorable terms which could be in the future used to address structural problems of national economies.

In the course of the official ceremony at the 6th BRICS Summit, interbank cooperation mechanism member banks signed an Agreement on Cooperation in innovations in the presence of Heads of State. The Agreement provides for the BRICS financing development institutions to support innovation activity and would help to ensure sustainable growth and inflow of investments in infrastructure sectors of economy and in energy efficient and high technology manufacturing sectors.

The BRICS interbank cooperation mechanism was formed as a result of signing a Memorandum on cooperation between BRICS nations’ development and export support institutions dated April 15, 2010.

The Memorandum is mainly designed to promote all-round, long-term, interbank cooperation between partners in order to enhance trade and economic relations between BRICS member nations as well as provide support for socially meaningful and regional projects.

VEB Chairman Vladimir Dmitriev participated in the city of Rome (Italy) on July 4, 2014 in a conference devoted to Group of Twenty countries development banks’ role is ensuring sustainable development of national and regional economies and in the second meeting of G20 countries financial institutions’ heads in the D20 format.

In 2013, VEB acted as an initiator of holding G20 development institutions meetings in the D20 format.

At the last meeting, its participants discussed issues of cooperation between G20 countries development banks, their interaction with international financial institutions, development banks’ role in promoting green projects as well as development banks’ capabilities in raising private long-term investments. In his address, Vladimir Dmitriev announced VEB’s initiative on including representatives of D20 format financial institutions in national delegations to participate in G20 Investment and Infrastructure Working Group meetings. Development banks’ participation in the G20 Working Group is of mutual interest and would contribute to effective funding of long-term projects in close cooperation with international financing institutions, national governments and private long-term capital.This initiative was fixed in the final statement of the D20 meeting’s participants.

VEB’s Chairman participated in a session of the Long-Term Investors Club Coordinating Committee. In the course of the session, its participants discussed the Club’s and its governing bodies’ main lines of activity.

Vladimir Dmitriev met the management of the KfW Banking Group and discussed the project of establishing a Joint Fund to Support Small and Medium-Sized Enterprises and issues of working out conditions for a credit line under the program “Baltica”.

In the course of Group of Twenty –D20 financial development institutions’ events the following documents were signed:

Vladimir Dmitriev and President of OJSC United Aircraft Corporation (UAC) Mikhail Pogosyan and Alenia Aermacchi CEO GuiseppeGiordo visited SuperJet International (SJI) a joint venture of OJSC Sukhoi Company and Alenia Aermacchi. They discussed issues of organizing a competitive system of funding export supplies of Russian civil aircraft. A full-flight simulator “Superjeta” was demonstrated. All in all there are three simulators – one is in Venice, the second based on Superjeta - inthe city of Zhukovsky and the third - in Aeroflot company which is actively operating Superjet-100. The simulator can imitate any flight and weather conditions. These simulators are used to trainall Superjet pilots. As of today, 344 pilots have been trained for various world companies operating the Russian aircraft. Three Superjet-100 liners were demonstrated in the customizationcenter of SuperJet International. They are intended for Mexican airline Interjetwhich is already operating 8 similar aircraft. Vnesheconombank participates in a consortium of international banks responsible for extending syndicated loans to fund supplies of 20SukhoiSuperjet 100 aircraft to the Mexican airline.

As part of Group of Twenty (G20) financing development institutions events, VEB and the Italian National Agency for Investment Promotion INVITALIA entered into a Memorandum on Cooperation in the city of Rome.

On behalf of VEB the Memorandum was signed by Chairman Vladimir Dmitriev and on behalf of INVITALIA - by President Giancarlo InnocenziBotti.

The two parties have agreed to cooperate in providing support for Russian and Italian companies upon implementing projects in infrastructure, sustainable development, exports promotion as well as share information and business experience.

The Memorandum would help to promote relations and enhance ties with Italian companies.

Agenzianazionale per l'attrazionedegliinvestimenti e lo sviluppod'impresa (INVITALIA) is the Italian National Agency for Investment Promotion with an authorized capital of 836 million euros wholly owned by the Italian Ministry of Economy and Finances. INVITALIA’s activity is designed to create favorable conditions and ensure success of each investment project. INVITALIA assists foreign investors seeking to expand their business and start a new one in Italy by providing them with a whole range of services at all stages of investment process.

As part of Group of Twenty (G20) financing development institutions events, VEB and Cassa Depositi e Prestitiinto a Memorandum of Understanding in the city of Rome.

On behalf of Vnesheconombank, the Memorandum was signed by Chairman Vladimir Dmitriev and on behalf of the Italian Development Bank – by President Franco Bassanini. 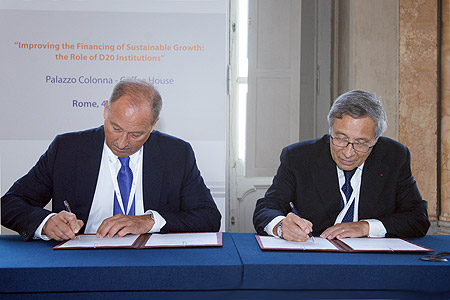 The two parties have agreed to cooperate in implementing projects in infrastructure, sustainable development, exports promotion, working together on capital markets as well as sharing business experience and information.

A similar document was signed between the development institutions of Italy and Russia in February of 2011 in the city of Rome. The document expired in December of 2013.

Cassa Depositi e Pestiti (CDP) is an Italian development institution created in the form of a joint stock company under government control with an authorized capital of 3.5 billion euros: the Italian Government’s stake is 80.1% of capital, 18.4% is owned by a wide group of banks and financial holdings, the remaining stake of 1.5% is comprised of treasury shares. CDP is responsible for managing the most part of Italian citizens’ savings placed in postal-savings that form the main source of funding for CDP. CDP plays a key role in supporting the Italian economy and government enterprises. Like Vnesheconombank, it is a member of the Long-Term Investors Club.