State Corporation ‘Bank for Development and Foreign Economic Affairs (Vnesheconombank)’ and the Government of the Republic of Khakassia entered into an Agreement on Cooperation.

The Agreement provides for establishing partnership and enhancing long-term and effective cooperation in investment activity.

Under the Agreement the parties intend to cooperate in developing mechanisms for implementing investment projects including those to be carried out on the terms of public private partnership as well as in providing support for small and medium-sized enterprises.

The parties give high priority to projects aimed at developing infrastructure and industry.

This Agreement’s implementation would help to address high-priority objectives of the Khakassia Republic’s socio-economic development and strengthen its economic and industrial potential.

The results of the Competition for the award for promoting sustainable development and responsible lending practiceswere summed up in the course of the Global Sustainable Finance Conference (the city of Karlsruhe, Germany, June 12-14, 20-14). The Competition was organized by the Association of Development Financing Institutions in Asia & the Pacific (ADFIAP), the European Organization for Sustainable Development (EOSDD) and the World Federation of Development Financing Institutions (WFDFI). The organizers reviewed more 200 applications and selected 10 winners.

Vnesheconombank was among the winnersand was awarded an honorary diploma for funding a project on the reconstruction and construction of minor hydroelectric power plants in the Republic of Karelia. This project became a laureate in the nomination “The Best Project in Industry or Infrastructure Built on Sustainable Development Principles”. 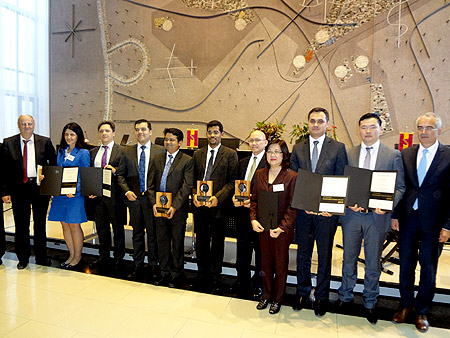 CJSC Nord Hydro is responsible for constructing and reconstructing 108 minor hydroelectric power plants (MHPP) on the territory of the Russian Federation in several stages.

Vnesheconombank is funding the first stage of the project that provides for constructing eight MHPPs in Karelia. The project’s total value is 29.5 billion rubles. Under the credit agreement concluded in late 2011, VEB provided CJSC Nord Hydro with a credit line with a drawdown limit of 1.6 billion rubles for a period of up to the end of 2016. As of today, they completed the construction of two MHPPs “Lyaskelya” and “Ryumyakoski”. At present, the third MHPP “Kalliokoski” is being built. It is to be launched in late 2014. Other hydroelectric power plants are at a design stage.

Vnesheconombank intends to go on participating in funding projects in renewable sources of energy. These projects’ implementation is in line with objectives stipulated in the Strategy of Energy Development of the Russian Federation in so far as it relates to decentralized supply of energy-deficient regions, enhancing electricity supply reliability, developing and increasing the proportion of clean renewable energy sources in the energy balance.

Vnesheconombank to fund the construction of a methylchlorsilanes plant in Kazan

A ceremony to open a memorial sign to honor the beginning of a methylchlorsilanes plant construction was held in Kazan. In the attendance of the ceremony were Russia’s Minister of Industry and Trade Denis Manturov, President of the Republic of TatarstanRuslanMinnikhanov, Vnesheconombank Chairman Vladimir Dmitriev, First Vnesheconombank Deputy Chairman – Member of the Board Andrei Sapelin.

A project to construct a methylchlorsilanes plant is to be implemented by OJSC KZSK- Silicon with the financial assistance of the Bank for Development under the federal target program (Minpromtorg of Russia is a state customer). The project’s total value is 9.8 billion rubles.

A decision on VEB’s participation in funding the construction of the plant was made by the Bank’s Supervisory Board in March of 2014. Vnesheconombank is expected to provide OJSC KZSK Silicon with 7.8 billion rubles for a period of 12 years. A bulk of investments is scheduled to be used for creating new production facilities applying Russian technologies and on the basis of Russian equipment.

This project is of national significance. Its implementation would make it possible not only to create our own raw materials base to develop Russia’s main industrial sectors but also to overcome dependence on import supplies of strategic methylchlorsilanes raw materials. The plant is to produce a wide range of raw materials to manufacture special gluesand rubbers. At present, these materials are for the most part supplied to Russia by China, the US and Germany. As a result of the project’s implementation revenues in the budgets of all levels will amount to 13.5 billion rubles and more than 750 jobs will be created.

The first meeting of the Working Group on Monitoring the Implementation of Joint Action Plans of Vnesheconombank and the Primorsky Territory Administration for the comprehensive development of the region’s territory for a period of 201-2018 was held om June 11, 2014 at Vnesheconombank. The meeting was chaired by Vnesheconombank Deputy Chairman – Member of the Board Sergei Vasiliev. In the attendance of the meeting was First Vice Governor AlexandrKostenko.

In the attendance of the meeting held in the format of videoconference were representatives of the government authorities of the Primorsky Territory, Vnesheconombank’s and its subsidiaries employees as well as initiators of investment projects.

The meeting’s participants discussed the results of implementing the Joint Action Plan in the 4th quarter of 2013 – the 1st quarter of 2014, the progress of considering investment projectsbeing examined at Vnesheconombank and promising projects in the Primorsky Territory.

As of today, 5 projects of the Primorsky Territory are being considered at Vnesheconombank. Their total value is 225.54 billion rubles with the Bank’s expected participation share being 215.13 billion rubles.

As of June 2, 2014 the regional limit set for the Primorsky Territory under the program to support small and medium-sized enterprises implemented by Vnesheconombank through its subsidiary SME-Bank was 737 million billion rubles, with unexpended balance being 434.3 million rubles.

The next meeting of the Working Group on Monitoring the Implementation of Joint Action Plans of Vnesheconombank and the Primorsky Territory Administration is to be held in the 4th quarter of 2014.

The Working Group was established in order to monitor the implementation of joint action plans of Vnesheconombank Group and supreme executive government authorities of Russia’s constituent entities. The Joint Action Plan of Vnesheconombank Group and the Primorsky Territory Administration for the comprehensive development of the Primorsky Territory for a period of 2013-2018 was approved by Vnesheconombank Chairman Vladimir Dmitriev and Governor of the Primorsky Territory Vladimir Miklushevsky in Septrember of 2013. The Working Group is comprised of Vnesheconombank’s representatives and the Bank’s subsidiary institutions: OJSC the Export Insurance Agency of Russia, the Strategic Initiatives Agency for Promoting New Projects, the RFPI Management Company (LLC), OJSC Svyaz-Bank, CJSC GLOBEXBANK, OJSC SME Bank, VEB Capital (LLC), VEB Engineering (LLC), OJSC Federal Project Finance Center, and OJSC VEB-Leasing.

Vnesheconombank transferred the second charitable contribution worth 50 million rubles to the Lenin central district hospital in the Jewish autonomous area. The funds are to be used to restore the health care institution and adjacent territory affected by the 2013 flood as well as to buy medical equipment. The hospital received a total of 120 million rubles from Vnesheconombank.

In October of 2013, Vnesheconombank transferred the first charitable contribution to the hospital in the amount 70 million rubles. This money is being used to make capital repairs of premises in the main building, construction workers are rebuilding sewage, heat, water and electricity supply systems.

The second charitable contribution worth 50 million rubles is to be used to rebuild ventilation system and the face of the main building as well as to repair outpatient clinic, garage and maintenance building. There are plans to improve and landscape the territory, purchase medical and laundry equipment lost in the emergency.

Upon completing the repairs, patients are to be provided with all kinds of medical services and the hospital will become one of the best medical institutions in the Jewish autonomous area.

Chief Medical Officer of the Lenin central district hospital Alena Pozdysheva said, “On behalf of our personnel I’d like to thank Vnesheconombank for rendering financial assistance to our hospital affected by flood. As a result of such assistance our employees will work under comfortable conditions and patients will be able to undergo the best treatment”.

Charitable activity is an important line of Vnesheconombank’s social activity, which also includes providing assistance to health-care institutions. Vnesheconombank’s charitable program is approved by the Bank’s Supervisory Board headed by the Russian Prime Minister.

The Lenin central district hospital founded in 1928 is five years older than the autonomous area itself. 90 people can receive in-patient care and another 140 people can undergo outpatient treatment. 20medical specialists work for the clinic in such areas as surgery, therapy, gynecology, neurology, pediatrics. The hospital also employs 170 paramedical workers. The flood caused a significant damage to the hospital. The ground floor, basements, garage and vegetable store cellar were under water during a month.