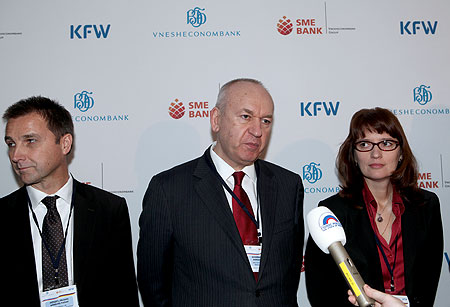 In the city of Munich on November 28-29, Vnesheconombank, SME Bank and the KfW Banking Group held a Russian-German Conference “Regional Programs of Small and Medium-Sized Enterprises – Germany’s Business Experience and Possibilities for Implementing it in Russia”. The conference’s participants studied German business experience in providing support for SMEs at the regional level and discussed prospects for using international practices in Russian regions.

In the attendance of the conference were representatives of government authorities and constituent entities of the Russian Federation as well as Germany’s authorities and administrations responsible for issues of economic development and support for SMEs, representatives of SME support infrastructure institutions from Russia and Germany, management of Russian banks – partners of SME Bank.

Giving a welcoming address to the conference’s participants Vnesheconombank Deputy Chairman – Member of the Board Mikhail Kopeikin said, “KfW is a reliable partner in all Vnesheconombank’s lines of activity and the most important source of long-term investments for Russian small and medium-sized enterprises. Since 2009, Vnesheconombank has raised about 500 million euros (20 billion rubles) which were used to fund the SME sector which is of paramount importance for any country’s economy.

Kopeikin also stressed that Germany’s federal government is particularly active in supporting small and medium-sized enterprises. In this respect, business experience in supposing SMEs is of special significance for Russia, given great potential for the development of SMEs in Russia.

The Russian delegation visited a Bavarian biochemical cluster – Bio Biotech Cluster Development GmbH to share experience in creating and developing territorial clusters. Particular attention was given to small and medium-sized enterprises’ participation in such projects.

In the course of the working trip the conference’s participants held meetings with the management of Bavaria’s Development Bank and representatives of the Bavarian Ministry of Economic Affairs and Mass Media, Energy and Technology in the course of which they identified main lines of their further cooperation.

Conference “Regional Programs of Small and Medium-Sized Enterprises – Germany’s Business Experience and Possibilities for Implementing it in Russia” is the eighth joint conference of Vnesheconombank, SME Bank and KfW. Their cooperation aims to enhance interaction between Russian and German financial institutions in supporting small and medium-sized enterprises as well as study best practices of German land banks and expand cooperation economic relations between enterprises, banks and Russian and German authorities. The conference’s moderators were Vnesheconombank Deputy Chairman – Member of the Board Mikhail Kopeikin, KfW Financial Systems Development Department Director Michael Mershel, Director of the the Russia Economic Development Ministry’s Department for the Development of Small and Medium-Sized Enterprises and Competition Natalia Larionova, SME Bank Board Chairman Sergey Kryukov, Russian Consul General in Munich Andrey Grozov.

Moscow, Russia – November 28, 2013 – Mechel OAO (NYSE: MTL), one of the leading Russian mining and metals companies, announces that Elgaugol OOO project company has received the 404 million-dollar first tranche of the project financing for Elga Coal Complex as part of the first credit line with a drawdown limit of 150 million US dollars. A decision on the Bank’s participation in funding the project “Development of the North-West section of the Elginsk coal deposit in the Republic of Sakha (Yakutia)” in the amount of 2.5 billion US dollars was taken in September of 2013 by Vnesheconombank’s Supervisory Board.

Currently development of the rich Elga deposit is a key investment project for Mechel. Receiving these funds enables the company to continue working on this project regardless of market volatility and attain planned results as scheduled. “The quality of Elga’s coals and Elga’s geographic location make this project one of the most efficient in the world,” Chairman of Mechel OAO’s Board of Directors Igor Zyuzin said.

“It is through financing such important projects that the economy of Far East and Eastern Siberia should develop. This project is a key one for the region in the sense of economic effect,” Vnesheconombank’s First Deputy Chairman and member of the Board Andrey Sapelin said.

The deal granting Mechel OAO project financing totaling 2.5 billion US dollars for the development of Elga Coal Complex’s first stage was approved by Vnesheconombank’s Supervisory Board in September 2013. The loan has a tenor of 13.5 years with a grace period until 2017. According to the transaction’s conditions, Vnesheconombank’s funds will be used to complete construction of Elga Coal Complex’s first stage. It includes construction of a railroad and a mining and washing complex with an annual capacity of 11.7 million tonnes of run-of-mine coal by 2017.

State Corporation “Bank for Development and Foreign Economic Affairs (Vnesheconombank)” was established in 2007 through a transformation of Bank for Foreign Economic Affairs of the USSR. Vnesheconombank operates in conformity with Federal Law dated May 17, 2007 “On Bank for Development”. The Memorandum on Financial Policies approved by Resolution of the Government of the Russian Federation dated July 27, 2007 sets forth major business lines and indicators of the Bank’s performance. Vnesheconombank is one of the key instruments for implementing the state economic policy aimed at removing infrastructure restrictions that impede economic growth, enhancing efficient utilization of natural resources, developing high-tech industries, unleashing innovative and industrial potential of small- and medium-sized enterprises (SMEs) and ensuring support for exports of industrial goods and services.

The Elga coal deposit is Russia’s largest and one of the world’s largest deposits of high-quality coking coal, and is located in Southern Yakutia. Its reserves total some 2.2 billion tonnes according to JORC standards.

State Corporation ‘Bank for Development and Foreign Economic Affairs (Vnesheconombank)’ and the Center for International Industrial Cooperation UNIDO in the Russian Federation signed a Memorandum of Cooperation.

On behalf of Vnesheconombank the Memorandum was signed by Deputy Chairman – Member of the Board Alexandr Ivanov and on behalf of the Center for International Industrial Cooperation UNIDO in the Russian Federation – by Director Sergei Korotkov.

Under the Memorandum Vnesheconombank and the Center for International Industrial Cooperation UNIDO in the Russian Federation intend to identify key lines of their cooperation to assist in enhancing partner relations between Russian enterprises and organizations in the field of technologies and innovations in Africa-BRICS format.

Under the Memorandum the Parties are to render all-round assistance in expanding regional and sectoral cooperation aimed at unlocking industrial potential of Russian companies and at export promotion of Russian-made high-technology products in Africa-BRICS format.

The Parties approved representatives of the relevant functional subdivisions to coordinate cooperation under the Memorandum.

The Center’s main objective is to assist international cooperation between Russian enterprises, associations, organizations and companies from industrialized and developing countries in economic, technological, industrial and scientific spheres.

A report published by the Anticorruption Research Center – Transparency International–R on transparency of purchases, their openness and compliance observance in Russian state corporations is interesting and undoubtedly useful for each state-owned company.

As Vnesheconombank participated in the research done it has the right to comment on the content of this material.

Work on posting subdivisions on Vnesheconombank’s official site and filling them with content is to be performed in accordance with the Russian Anti-Corruption Legislation and within the time limits set by it.

Data on incomes, property and property obligations of the state corporation’s top management are posted on the site and are available in the archive.

Vnesheconombank holds a unique position among Russian state corporations for the reason that it is a bank and a creditor institution.

Participation of the Bank’s representatives in profit-making organizations’ governing and control bodies is to be approved by Vnesheconombank’s Supervisory Board and is to be carried out either on the Russian Government’s instructions (to represent the state’s interests) or to make arrangements for exercising control over spending monetary funds bankrolled by the Bank for Development to finance investment projects.

Vnesheconombank set up a Code of Official Conduct and Conflict of Interests Settlement Commission which is functioning now (information is posted on the site).

Vnesheconombank Enters into a Memorandum of Understanding with Italian Mediobanca

On behalf of Vnesheconombank the Memorandum was signed by Chairman Vladimir Dmitriev and on behalf of Mediobanca - by Deputy Director General and Board of Directors Member Massimo Di Carlo and Managing Director Maria Luisa Cicognani.

The Memorandum of Understanding is aimed at expanding cooperation between the two banks in the field of Russian-Italian trade and economic activity including through providing funds by the Italian bank against insurance coverage of export insurance agency SACE as well as on a commercial basis. The parties also agreed to jointly implement public private partnership projects and cooperate in carrying out treasury operations.