In the course of the 17th International Security Show INTERPOLYTECH-2013 State Corporation ‘Bank for Development and Foreign Economic Affairs (Vnesheconombank)’ and CJSC Papilon entered into an agreement on cooperation.

The agreement provides for enhancing partner relations and expanding effective and mutually beneficial cooperation aimed at supporting exports of Russian high-technology products and boosting their competitive edge in the world market as well as carrying out tasks of Russian state defense purchases and federal programs in defense and security.

This agreement’s implementation would help to modernize the Russian economy as well as upgrade the system of the state support for exports of Russian products, works and services.

Closed Joint Stock Company Papilon is one of the world’s leaders in manufacturing systems of biometric identification on the basis of fingerprint and iris visualization as well as systems of identifying firearms for law enforcement agencies.

Vnesheconombank Organizes Consultations for Participants in the Forum ‘Open Innovations’

As part of the Moscow International Forum and Exhibition ‘Open Innovations’ on October 31 and November 1, 2013 a consulting service is to operate at Vnesheconombank’s booth.

The consulting service is designed to inform potential investors and would-be borrowers about the specifics of VEB’s and its subsidiary institutions’ activities, procedures for preparing investment projects with due regard to requirements made by Vnesheconombank.

Vnesheconombank Group’s specialists will act as expert consultants. All interested persons will have a chance to receive information on the terms of extending financing including in innovations, natural resources, construction, comprehensive development of institutions, small and medium-sized enterprises, infrastructure, industry as well as on key aspects of preparing applications for participating in the Competition for Vnesheconombank’s Development |Award.

You can sign up for a consultation on the following site: http://www.premiya-razvitiya.ru/ till October 29. 2013.

An idea of creating a gymnasium came into being in 2010. It was initiated by Russia’s State Corporation ‘Bank for Development and Foreign Economic Affairs (Vnesheconombank)’. The initiative was backed by Rossotrudnichestvo. In September of 2012, Prominvestbank, Russia’s and Ukraine’s education ministries signed a trilateral Memorandum of Understanding on Enhancing and Deepening Cooperation in General Secondary Education for 2012-2014.

On September 1, 2013 the Russian-Ukrainian humanitarian gymnasium opened doors for its pupils. In autumn of 2013, the gymnasium was accredited and licensed in the Russian system of secondary education. Gymnasium leavers will be entitled to enroll in universities of both countries – they are to be given standard school certificates of Russia and Ukraine. The gymnasium is scheduled to be put in charge of a CIS leading teacher’s training university.

Acting as an initiator of creating this gymnasium Vnesheconombank made all necessary financial and organizational efforts for it to come into being. This project’s implementation was a significant contribution to expanding educational opportunities for both Ukrainian citizens and Russians living on the territory of Ukraine and helped to unify educational standards.

Vnesheconombank’s delegation headed by Chairman Vladimir Dmitriev participated in a series of bilateral meetings and multilateral events held as part of an autumn session of the International Monetary Fund and the World Bank (11-13 October 2013, the city of Washington).

In the course of their working meeting Vladimir Dmitriev and President of the European Investment Bank (EIB) Werner Hoyer discussed issues of EIB’s participation in Vnesheconombank’s current projects on supporting small and medium-sized enterprises in Russia, forthcoming joint events in 2014 devoted to funding infrastructure projects on Russia’s territory, pointed out a successful implementation of the Memorandum of Understanding signed as part of the initiative “Russia-the EU: Partnership for Modernization” and discussed the possibility of holding an annual meeting of G20 countries development banks by the European Investment Bank (similarly to the meeting of G20 countries development institutions’ heads organized by VEB in July of 2013).

As part of events in the city of Washington, Vnesheconombank Deputy Chairman – Member of the Board Alexandr Ivanov held talks with Vice President of the International Finance Corporation Dimitris Tsitsiragos. They discussed issues of the current cooperation including an agreement on projects in energy efficiency. There were also bilateral meetings with representatives of the World Bank and the Multilateral Investment Guarantee Agency (MIGA) which is a member of the World Bank Group.

Vnesheconombank’s representatives participated in the second annual meeting of the International Development Finance Club where the Club’s performance results for the year 2013 and its action strategy for the year 2014 were approved. UN Secretary General Ban Ki Moon was a Guest of Honor at the meeting, in his address he spoke about green financing which is one of the Club’s top-priority lines of activity. 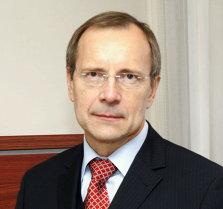 Vnesheconombank Deputy Chairman Sergei Lykov told in his interview to Prime Agency how the dynamic growth of the Bank’s loan portfolio influenced Vnesheconombank Group’s indicators in the first half of 2013, as well as in which sectors companies received the largest volume of credits and if VEB’s main borrowers are state corporations.

-How would you assess VEB’s performance for the 1st half of 2013?

-As a whole, I should say that despite the extremely negative situation abroad and known problems in the Russian economy Vnesheconombank Group was able to maintain stable development rates. Its consolidated financial statements, that is, statements with due regard to its subsidiary and affiliated institutions including foreign ones show that assets increased by 204 billion rubles from the start of 2013 or almost by 7%. This is higher than the growth in assets of the entire Russian banking sector that amounted to 6.5% for the same period of time. In our capacity of development institution we’re very happy that our loan portfolio increased by 230 billion rubles or by 15.4% (including in project financing where the growth amounted to 148 billion rubles, almost 24%) while in the banking sector as a whole these indicators in non-finance enterprises and institutions amounted to 5.3% and 13.7% - for natural entities. The proportion of credits to customers in Vnesheconombank Group’s assets increased from 51% to 55% for the first half of 2013.

-What economic sectors does Vnesheconombank regard as the most important in terms of extending credits?

-It’s well-known that the Bank’s main principles and lines of activity are set forth in the federal law “On the Bank for Development” and the Memorandum on its Financial Policies. Vnesheconombank’s subsidiaries are commercial institutions but their activities are closely related to addressing tasks that are set before Vnesheconombank. These tasks include overcoming infrastructure constraints, modernizing and developing non-raw materials economy, stimulating innovations, exports and implementing other projects.

In the first half of this year the Bank for Development played a major role in Vnesheconombank Group’s loan portfolio growth. Its proportion in the total volume of growth was almost 76% but I’d also like to underline excellent performance of such members of the Group as OJSC VEB-Leasing, its portfolio increased by almost 21.53% to 214 billion rubles as well as OJSC Belvnesheconombank, its portfolio increased by 23.3% to 47 billion rubles.

As far as economic sectors are concerned most credits were extended to construction and production sectors including mechanical engineering and defense industrial complex – 846.4 billion rubles (taking into account formed reserves) an increase of more than 23% for the first half of the year. Next in terms of growth rates are transport (18.1%), raw materials industry (19.3%), telecommunications (8%) science and education (almost 41.15%) but unfortunately the volume is still small).

Somehow it is believed that Vnesheconombank’s main borrowers are state-controlled companies. Vnesheconombank Group’s financial statements show that this is not the case. Almost 1552.2 billion rubles (taking reserves into account) were extended to private companies, that is, almost 80% of the whole loan portfolio.

-You’ve mentioned reserves formed against extended credits. What are their volumes and dynamics?

-As a whole in the first half of 2013, credit depreciation reserves increased by 21.1 billion rubles from 193.4 billion rubles to 214.5 billion rubles or by 10.9%. We view this increase as more than normal keeping in mind the dynamic growth rate of our loan portfolio as well as the fact that investment projects account for the greater part of this portfolio. Here I mean projects that are not attractive for commercial and financial sectors. During the first half of the year reserves ratio changed insignificantly from 11.4% to 11.1%.

-How did Vnesheconombank Group manage to ensure such a high growth rate of assets and loan portfolio?

Thus, Vnesheconombank managed to raise 3.2 rubles for each ruble invested in its capital. The raised funds were used for modernizing the economy.

-As Vnesheconombank is a state corporation, that is, a nonprofit institution, generating profits is not an end in itself for it. Does Vnesheconombank continue to operate on a break-even principle?

-If we perform an analysis through comparing data for the first half of 2013 and the first half of 2012 on the basis of average chronological balance indicators we can see that profits went down from 21.6 billion rubles to 0.8 billion rubles. The main reasons are pretty objective: this is additional formation of reserves (and the reason for it is quite obvious – a sharp increase in the amount of investment projects in the Bank’s loan portfolio) and negative dynamics in foreign currency revaluation of balance sheets, the amount of balance decreased by 7 billion rubles for a comparable period of the last year.

And I’d like note that net interest income amounted to 46.7 billion rubles - an increase of 8 billion rubles (+20.8%) from the same period in the last year. Net interest margin remained stable at a level of 3.4%. The main reason for it was the growth of interest incomes to117.6 billion rubles due to the increased volume of the loan portfolio. Expenses also increased by 11.6 billion rubles (+19.5%) to 71 billion rubles. The growth in expenses was influenced by increased volume of raised funds and a certain increase in fund-raising rate from 6% in the first half of 2012 to 6.1% in the first half of 2013. In this respecrt it should be noted that Vnesheconombank’s capacity to raise financial resources is limited compared to major commercial banks as they can raise deposits from legal and natural entities and use balances of these accounts to conduct active transactions.