In the course of the INNOPROM-2013 International Industrial Fair in the city of Yekaterinburg, State Corporation ‘Bank for Development and Foreign Economic Affairs (Vnesheconombank)’ and the Sverdlovsk region Administration entered into an Agreement on Cooperation.

On behalf of Vnesheconombank the Agreement was signed by Deputy Chairman Anatoly Ballo and on behalf of the Sverdlovsk region Administration – by Governor Evgeny Kuivashev.

The Agreement provides for promoting long-term cooperation in implementing investment projects and programs in the innovation and high-technology sector on the region’s territory and it would also help to create a network of technological centers that have a range of required resources.

The creation of new competitive business-structures in the form of engineering centers on the Sverdlovsk region’s territory would make it possible to deeper concentrate on developing new high-technology products in the top-priority sectors of the Russian economy as well as create new jobs.

As part of the Agreement the parties agreed to assist in preparing and funding investment projects and programs in establishing and developing engineering centers. 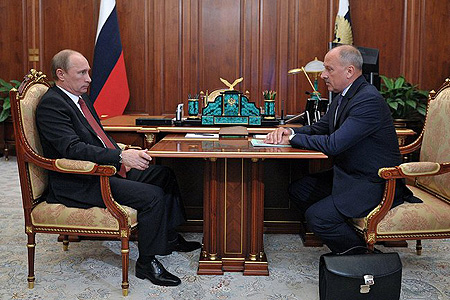 They discussed preparations for the G20 summit in Saint Petersburg as well as Vnesheconombank’s participation in implementing a number of long-term infrastructure projects.

V.PUTIN: First, Vladimir Alexandrovich I know that as part of preparing for the G20 summit, you and your colleagues are to hold a meeting of the G20 development institutions. What issues are you going to discuss there and what could you suggest to us at a meeting in September?

And second, we’ll discuss Vnesheconombank’s participation in implementing infrastructure projects including those that we plan to fund from the Reserve Fund.

V. DMITRIEV: You are quite right; we launched an initiative last year before Russia became chairman of G20 to hold a meeting of heads of national and international development institutions in Moscow on the threshold of G20 summit.

This meeting is to take place in Moscow on July 17-18 before the G20 finance ministers’ and central bank governors’ meeting. As I have already mentioned representatives of key development institutions will come from Germany and European investment banks, the European Bank for Reconstruction and Development, the International Finance Corporation, heads of financing institutions from BRICS member countries, almost all continents will be represented at the meeting. And our meeting’s main motto is sustainable growth through long-term investments.

The fact is that recently it has become very important not only for us but also for other countries and above all for development institutions to search for reliable long-term investment projects. And here I mean not only national projects but also those of trans-border importance.

So, I think that we’ll sign a communiqué which will be submitted to the G20 summit this autumn. This communiqué will express our interest to jointly fund infrastructure projects.

And I’d like to stress it once more that financing institutions of Western Europe are not only ready to fund regional projects but they are also ready to make long-term investments in projects in Russia in the interests of sustainable growth.

In this sense, this theme has something in common with your second question concerning Vnesheconombank’s readiness and available instruments to operate financial resources of the National Wealth Fund to fund infrastructure projects in Russia.

We launched an initiative to commit 450 billion rubles to fund three major investment projects. We and Finance Ministry executives have already got down to discussing potential schemes for funding not only these projects but also profitable, reliable, low-risk projects by way of using financial resources of the National Wealth Fund (NWF).

Taking into account that this Fund is a special structure, special institution designed to protect interests of the Pension Fund and to finance the Pension Fund’s budget deficit we should search for projects that would secure the payback of investments.

I’m really happy that the Economic Development Ministry and its new minister supported the idea on the basis of factual figures that show that financial resources of the Funds are not managed by the Central Bank as efficiently as those funds that are already placed with Vnesheconombank and are working to support the Russian banking system.

VEB for example could act as a project operator and the Direct Investment Fund could be involved in engaging our partners from other investment funds, sovereign funds for participating in these projects having in mind that 450 billion rubles I mentioned speaking at the Petersburg Economic Forum are basically only start-up capital because each of these projects requires a lot more money and we are well aware of it. But without this start-up capital we won’t be able to move along these three directions at all. So, we should choose the best development options for each of the projects to go off to a good start. In this sense, your financing institution could be highly instrumental. And I hope it sure will.

V.DMITRIEV: In your address at the Petersburg Economic Forum you stressed that there were reliable private investors in Russia. I believe that our Direct Investment Fund is among them as well as the funds we have already been cooperating with. We’ll certainly synchronize our work with DIF. My namesake Mr. Dmitriev participated in the talks we held at the Finance Ministry. I think we are close to finding an optimal solution.

V. PUTIN: Concentrate on this work. The truth is that we can’t call it a private fund because it is funded by the state but it is in a position to engage private sovereign funds for these projects and the projects we are now talking about are long-term ones and they are absolutely reliable.

Investments in infrastructure of such a country as Russia are undoubtedly reliable. This is not of course fast money, these are long-term, and I’d like to stress it once more, reliable investments. They could generate profits and they must be paid off.

It’s very important for us to have a managing company that can operate financial resources being raised and generate profits by all means otherwise these projects won’t be attractive for the very private funds we have just mentioned.

Origin: Internet Portal of the President of the Russian Federation

On behalf of Vnesheconombank the Agreement was signed by Deputy Chairman – Board Member Alexandr Ivanov, on behalf of ASP by Director General - Board Member T. Bondurant French. 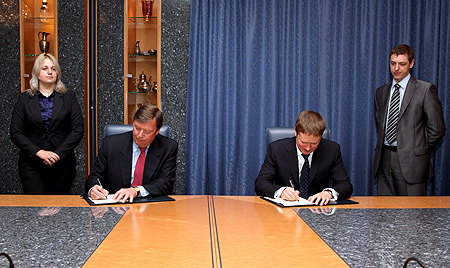 The Agreement provides for establishing partner relations in expanded access of Russian companies’ to long-term financial resources in the form of direct investments in their charter capital. The parties intend to give high priority to the development of direct investments’ infrastructure in the Russian Federation including the establishment of mutual investment funds.

Top-priority lines of cooperation are in line with the Memorandum on Vnesheconombank’s Financial Policies and ASP standards and provide for implementing projects in infrastructure, energy and resource efficiency, providing support for SMEs, pharmaceutical and medical industry, technologies and innovations as well as other projects that require direct investments.

In the course of the International Naval Salon in the city of Saint Petersburg, State Corporation ‘Bank for Development and Foreign Economic Affairs (Vnesheconombank)’and OJSC the United Shipbuilding Corporation entered into an agreement on strategic cooperation.

On behalf of Vnesheconombank the agreement was signed by Chairman Vladimir Dmitriev and on behalf of OJSC USC – by President Vladimir Shmakov.

The parties agreed to cooperate in addressing top-priority objectives of implementing government defense procurement contracts as well as measures of federal programs aimed at boosting the defense industrial complex (DIC), modernizing and retooling defense enterprises and helping DIC enterprises to fulfill their obligations on supplying defense products as part of military-technical cooperation with foreign states.

Under the agreement Vnesheconombank and OJSC USC also agreed to cooperate in the following lines of activity:

In its turn Vnesheconombank is ready to explore the possibility of funding projects and investment programs of OJSC USC as well as assist in raising non-budgetary sources for funding investment projects aimed at developing DIC. VEB is also ready to fund projects in order to implement government procurement contracts and federal programs in defense and security sectors and extend guarantees and warranties as a security of defense enterprises’ obligations as well as participate in financial rehabilitation of OJSC USC enterprises.

In order to coordinate their interaction the parties agreed to establish a working group.

Under the Memorandum on its Financial Policies Vnesheconombank is responsible for funding organizations participating in implementing government defense procurement contracts and measures of federal target programs in defense and security sectors. The Bank is also responsible for extending guarantees and warranties as a security of the said organizations’ obligations.

In the course of the International Naval Salon in the city of Saint Petersburg, State Corporation ‘Bank for Development and Foreign Economic Affairs (Vnesheconombank)’ and OJSC Sredne-Nevsky Shipyard entered into an agreement on strategic cooperation.

On behalf of Vnesheconombank the agreement was signed by Chairman Vladimir Dmitriev and on behalf of OJSC Sredne-Nevsky Shipyard – by Director General Vladimir Seredokho.

The parties agreed on strategic partnership and on promoting long-term and effective cooperation in funding investment projects.

The agreement provides for the parties’ cooperation in providing mid-term and long-term funding as part of implementing investment projects.

Cooperation between OJSC Sredne-Nevsky Shipyard and Vnesheconombank would enhance the development of Russia’s navy as a whole and increase the share of products exported to foreign markets.