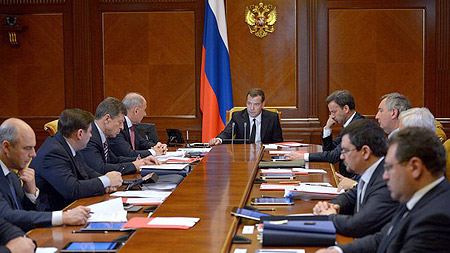 We are having Vnesheconombank’s regular Supervisory Board meeting today. We’ll review VEB’s performance report for 2012. We have also to deal with objectives associated with major investments in modern high technology projects. There is no doubt that we can’t implement these projects without using development institutions. VEB is our leading development institution – it extended credits in its capacity as a bank for development for an amount of 720 billion rubles as of January 1 of the current year. This is about 200 million more than planned in the Bank’s Development Strategy. Most of the funds worth 670 billion rubles were used to finance large-scale investment projects in above all infrastructure assets, agro-industrial complex, chemical and petrochemical industries. If we add credits VEB extended as a whole, the total amount of funds provided to the economy exceeded 1 trillion rubles.

The most significant projects launched by VEB last year are the following: building Express Am7 satellite, reconstructing the Izhevsk cogeneration plant, constructing crude oil and oil products tankers, developing the Talitsky area of the Verkhnekamsk potassium  and magnesium salts deposit and a number of other projects.

At the end of 2012, a subsidy worth 3 billion rubles was transferred to the Bank. For the first time in the modern Russian practice of supporting exports, a target subsidy was provided in line with WTO and OECD standards. These funds are to be used to compensate for interest rates on export credits.

Borrowings were made both on domestic and foreign financial markets. The Bank also raised syndicated loans with the help of a pool of banks. Vladimir Dmitriev (V. Dmitriev is Vnesheconombank’s Chairman) will report on this separately.

And one more theme to mention, VEB has become a full member of the Association of Development Financing Institutions in Asia and the Pacific. I hope that VEB’s membership in this Association will enhance its and Russia’s role in this region as a whole. It’s very important for us to be present there in various ways. V. Dmitriev will report on this in more detail.

I’d like to bring up one more issue, it is of social importance. The program of VEB’s investments in affordable housing construction is being completed. Almost 95% of this program has been carried out. The Bank extended about 88 thousand mortgage loans worth more than 140 billion rubles; more than 3.3 million square meters of living space were purchased. The program embraces almost all regions. Since it was launched in 2010, interest rates have fallen almost to 13% but unfortunately we have to admit that this a very high interest rate anyway, although we took measures to reduce it.

This is a task for the future and of course not only for VEB because credit rates are interrelated with each other and we can’t have a mortgage credit rate of 5% in one bank and 13% in the other. Nevertheless, this is a task for our entire banking system and we discussed the issue repeatedly during our previous meetings. There’s no doubt we need to stimulate demand for economic class housing which should be affordable for the largest categories of population. I believe that we could prolong this program until late 2014. Let’s discuss this at our Supervisory Board meeting.

And finally, we’ll approve the results of the Development Award Contest – these are modern projects, investment programs. 221 applications were submitted, there are laureates and their names are usually declared during the Petersburg Economic Forum. I think the VEB’s Chairman will tell about it separately. This is our today’s agenda and there are many other issues I haven’t mentioned. Let’s work tightly getting to the heart of all matters to be discussed.

Let’s start with approving the Bank’s annual performance report and making a decision on distributing profits generated by Vnesheconombank in 2012.

Origin: Internet Portal of the Government of the Russian Federation

Gorky (the Moscow region), May 28. INTERFAX AFI – Vnesheconombank (VEB) intends to increase its loan portfolio in 2013 at the rates comparable to those in 2012; funding of transactions will be a restraining factor, Vnesheconombank Chairman Vladimir Dmitriev told journalists after VEB’s Supervisory Board meeting.

“We have serious plans for increasing our loan portfolio, we are going to increase it at the rates comparable to those in 2012, the rates are somewhat restrained as we have to fund our transactions and meet capital adequacy ratio”, he said.

Moreover, saying about plans for borrowings in the current year V. Dmitriev said that the Bank intended to make both ruble and foreign currency borrowings. He said that he found it difficult specify dates for implementing these plans.

Russian Prime Minister Dmitry Medvedev said at VEB’s Supervisory Board meeting today that a mechanism for ensuring competitive conditions for funding exporters was created n Russia with the help of Vnesheconombank. At the end of 2012, 3 billion rubles were transferred to the Bank. For the first time in the modern Russian practice of supporting exports, a target subsidy was provided in line with WTO and OECD standards. These funds are to be used to compensate for interest rates on export credits.

VEB’s Supervisory Board approves nominees for the Development Award

GORKY, May 28 – RIA Novosti. Vnesheconombank’s Supervisory Board approved nominees for the Development Award, their names will be declared at the Petersburg Economic Forum, Vnesheconombank Chairman Vladimir Dmitriev told journalists.

Dmitriev reminded that the Award is given in four nominations and will be presented at the Petersburg Economic Forum by the Head of the state.

“Today we have approved institutions that will receive this Award in the course of the Petersburg Economic Forum”, he said adding that he will not name the institutions because this must be a surprise for the public”.

“We agreed that besides quantitative indicators in evaluating Vnesheconombank’s performance as well as  in making bonus payments to managerial personnel and employees we will take into account the Bank’s loan portfolio quality”, said Dmitriev. According to him, this is especially important because of the loan portfolio increased amounts. “Given the said growth, quality is important too”, Vnesheconombank Chairman stressed.

VEB might purchase infrastructure bonds of Rostech and Rosnano

“We are considering applications submitted by Rosnano and Rostech”, he said without specifying sums and dates for purchasing these bonds.

Vnesheconombank’s delegation participated in the 36th Annual Meeting of the Association of Development Financing Institutions in Asia and the Pacific (ADFIAP) held on May 22-23, 2013 in the city of Ulaanbaatar. The delegation was headed by Vnesheconombank Deputy Chairman, Board Member, Alexandr Ivanov.

In the course of the events in Ulaanbaatar talks were held with the Development Bank of the Philippine Executive Officer Jill Buenaventura, Development Bank of Mongolia Executive Officer Kin Jang Jim, and Vietnam Development Bank Director General Nguyen Quang Dung. They discussed issues of the current and potential bilateral cooperation in implementing joint projects in sustainable development, energy efficiency, infrastructure, as well as in financing projects of small and medium-sized enterprises, sharing experience and best business practices in main lines of activity.

At the ADFIAP Awards 2013 ceremony in Ulaanbaatar Vnesheconombank received the prize in the nomination “The Best Sustainable Development Report”.

Alexandr Ivanov had a working meeting with ADFIAP Secretary General Octavia Peralta. At the meeting they discussed Vnesheconombank’s role as a permanent member of the Association and the possibility of Vnesheconombank’s entering into the ADFIAP Board of Directors as well as issues of holding the next Annual Meeting.

The 37th regular Annual ADFIAP Meeting is to be held in spring of 2014 in Moscow. Vnesheconombank is to act as a host party and organizer.

The Association of Development Financing Institutions in Asia and the Pacific (ADFIAP) was established in 1976, and as of today it is one of the largest international associations of development institutions. It is comprised of 131 institutions from 45 countries. Vnesheconombank became a full member of ADFIAP on January 1, 2013.