Pavel Grachev was appointed as Director General and Board Chairman of the Fund by a decision of the Far East and the Baikal Region Development Fund’s Board of Directors as f January 28, 2013.

Director of Vnesheconombank’s Public Private Partnership Center Alexandr Bazhenov who held these positions earlier is to continue working in the Fund as a Board Member.

As of today, the Far East and the Baikal Region Development Fund jointly with regions’ administrations and private companies have formed a base of promising investment initiatives. An issue of implementing the most significant and best worked out projects is under discussion now. The Fund’s investment activity will focus on preparing and implementing effective projects on the comprehensive development of territories aimed at stimulating production activity and removing infrastructure restrictions.

The Far East and the Baikal Region Development Fund was established in 2011 in the form of an open joint stock company. The Fund’s main lines of activity are to promote investment activities in the constituent entities of the Far East and the Baikal region as well as prepare quality projects of regional and urban development. The Fund’s charter capital was increased from 500 million rubles (as of the date of its establishment) to 15 billion rubles. State Corporation ‘Bank for Development and Foreign Economic Affairs (Vnesheconombank)’ acts as the Fund’s founder and sole shareholder.

Vnesheconombank and leaders of constituent entities of the Russian Federation (the Perm Territory, the Republic of Komi and the Archangel region) argue for promoting the project on the construction of the Belkomur Railway.

The parties assessed the current state of the project and worked out measures for promoting it. In the near future a concept of implementing the project on the principles of public private partnership and its feasibility study are to be presented and parameters of Vnesheconombank’s potential participation are also to be determined. The total value of the project on the construction of the Belkomur Railway is currently about 180 billion rubles.

As part of implementing the Memorandum of Intent on Carrying out the Project on the Construction of a Railway line Archangel – Syktyvkar – Perm (Solikamsk), Vnesheconombank’s management held a meeting with representatives of the China Development Bank, the Railway Ministry of China, the China State Construction Engineering Corporation, and the Russian-Chinese Center of Economic and Investment Cooperation where they discussed issues of their potential joint participation in the Belkomur project.

The parties also discussed acceptable formats of implementing the project for Russia’s and China’s development institutions, including share capital structure of a special engineering borrower-company and opportunities for entering into its capital by major Russian and Chinese companies as well as an issue concerning the state’s and RZHD’s potential participation in the project.

In order to engage private investors for the project the parties deem it wise to work out a list of investment projects aimed developing a recourse base of the regions participating in the project (mining chemistry, oil industry, construction materials industry, agro-chemical complex and timber-industrial complex), including with the participation of the Russian-Chinese Investment Fund. A Russian-Chinese Working Group was set up to address these issues. It comprises representatives of the Komi Republic, Vnesheconombank, the Russian Transport Ministry, the China State Development Bank and a number of Chinese companies.

The project on the construction of a railway line Archangel – Syktyvkar – Perm (Solikamsk) as part of the Komi Republic’s, the Perm Territory’s and the Archangel’s Comprehensive Industrial and Infrastructural Development Program provides for constructing a new railway line with a total length 1155 kilometers out f which 715 km are to be built anew with the remaining functioning lines to be reconstructed or reinforced. Belkomur consists of two sections: the Northern section runs through the territory of the Archangel region and the Komi Republic) and the Sothern section runs from Syktyvkar through the territory of the Komi Republic and the Perm Territory.

In accordance with the terms of issuing eurobonds, on the Russian Finance Ministry’s instructions State Corporation ‘Bank for Development and Foreign Economic Affairs (Vnesheconombank)’ transferred funds in the total amount of 190 million 651 thousand 890.00 US dollars to Citibank N.A., London Office.

These funds were transferred to repay the government foreign debt of the Russian Federation to pay interest on eurobonds issued in 1998 for an amount of 3 billion 466 million 398 thousand US dollars for a period of 20 years.

The payment was made in a single currency.

A ceremony of commissioning the Adler TPS was held in the presence of Russian Prime Minister Dmitry Medvedev in the Adler district of Sochi.

In order to implement a project on the construction of the Adler TPS, in September of 2010 Vnesheconombank opened a credit line worth 19.45 billion rubles for a period of up to 15 years for investor-company LLC Gazprom Investproject (a subsidiary 100% owned by OJSC Gazprom).

Board Member – Vnesheconombank First Deputy Chairman said: “The project is of particular importance because the Adler TPS is the largest source of supplying power and heat to Olympic facilities during the Sochi 2014 Winter Olympic Games.” In the situation of the power shortage and the projected increased load in the region the availability of its own power generating station will make it possible to reduce power exchange from neighboring energy systems and ensure reliable power supply to consumers,” he added.

The Adler TPS is a modern combined-cycle 360 MW power station with a thermal capacity of 227 Gcal/h consisting of two self-contained PGU-180. Each power unit has two gas turbines manufactured by Ansaldo Energia (Italy) and a Russian-made steam turbine manufactured by the Kaluga Turbine Plant (OJSC). Gazprom Group started construction work on the site with a total area of 9.89 hectares in 2009. The project was implemented on the territory without infrastructure. The power station was designed and constructed in a configuration meeting all power and heating generating as well as environmental basic standards. The technological solutions and materials used in the construction of the Adler TPS meet the highest Russian and international environmental standards.

State Corporation ‘Bank for Development and Foreign Economic Affairs (Vnesheconombank)’ and the International Investment Bank (IIB) entered into an Agreement on Cooperation. 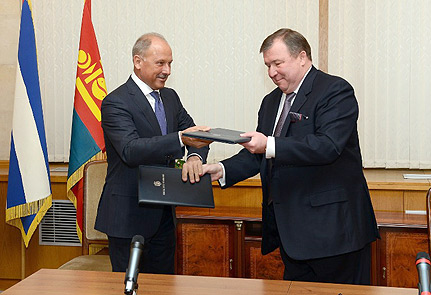 On behalf of Vnesheconombank the Agreement was signed by Chairman Vladimir Dmitriev and on behalf of IIB – by Board Chairman Nikolai Kosov.

The parties are exploring the opportunity to jointly participate in implementing investment projects including those aimed at supporting exports of Russian products and services to International Investment Bank member countries. Based on development banks’ functions and objectives the Agreement provides for expanding cooperation between the two financial institutions on Russian and international markets in order to develop and modernize the Russian economy and support economic cooperation between IIB member countries.

The International Investment Bank is an international financial institution established and operating on an appropriate intergovernmental agreement. IIB members are Bulgaria, Vietnam, Cuba, Mongolia, Russia, Romania, Slovakia and Czechia. The Russian Federation has the largest stake in IIB capital (44.7%).

IIB’s activity is aimed at funding small and medium-sized enterprises and supporting economic cooperation between IIB member countries. For the most part, the Bank uses agency funding principle.

The Bank gives high priority to cooperation with national and international financial institutions. The Bank focuses on opening targeted credit lines for national development banks and IIB member countries’ export-import banks as well as on participating in programs aimed at syndicated funding of investment projects.