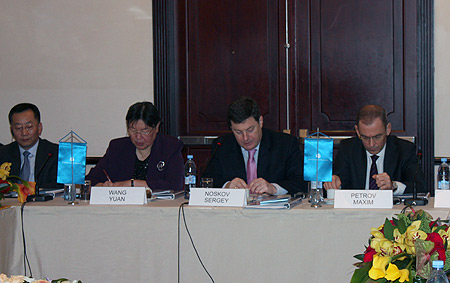 A practical workshop on sharing experience between specialists of State Corporation ‘Bank for Development and Foreign Economic Affairs (Vnesheconombank)’ and the China State Development Bank (CSDB) was held in Moscow. The workshop was organized as part of implementing the Agreement on Cooperation in Training Personnel and Sharing Experience between SCO Interbank Consortium Member Banks.

In the course of the workshop specialists shared experience in working out a strategy and a system of corporate social responsibility, organizing personnel training, main lines of developing educational initiatives, assessing positions of each bank as compared with leading foreign institutions. Representatives of CSDB told about their approaches to enhancing financial support for programs of renewable sources of energy as well as about the program aimed at boosting welfare of China’s population >>>

Vnesheconombank Deputy Chairman Irina Makieva participated in a meeting of the Business Council for Cooperation with Slovakia under the auspices of the Chamber of Commerce and Industry of the Russian Federation.

The meeting’s participants discussed the Council’s day-to-day activity and an action plan for the next year. In the course of the meeting Irina Makieva stressed the need to update the Business Council’s member base as well as to make a list of attractive projects of bilateral cooperation. All members of the Business Council were provided with lists of multi-profile municipalities with industrial parks where Slovak investors might become residents.

Irina Makieva was elected as Chairman of the Business Council for Cooperation with Slovakia.

In the city of Grozny, in the presence of Presidential Envoy to the North Caucasus Federal District Alexandr Khloponin and Chechen Leader Ramzan Kadyrov, State Corporation ‘Bank for Development and Foreign Economic Affairs (Vnesheconombank)’ and Closed Joint Stock Company the Kazbek Innovation Construction Technopark signed a credit agreement on extending 4.4 billion rubles for a period of 9.5 years.

On behalf of Vnesheconombank the agreement was signed by Deputy Chairman Anatoly Ballo and on behalf of the Kazbek Innovation Construction Technopark – by Director General Asvad Baisulaev.

Under the agreement credit resources are to be used to fund the project on the construction of the first innovation technopark on the territory of the Chechen Republic. The technopark integrates a complex of four interrelated facilities to manufacture advanced building materials: gas concrete blocks and slabs, fiber reinforced cement slabs, dry construction mixes and builder’s lime.

The project is designed to provide the construction market of the North Caucasus Federal with quality and affordable construction materials on the basis of developing the region’s own mineral raw materials.

A decision on the Bank’s participation in this project was approved by Vnesheconombank’s Supervisory Board in April of 2012.

The project was prepared with the assistance and direct participation of Vnesheconombank’s Representative Office in the North Caucasus Federal District headed by Arsan Demelkhanov.

The project’s implementation would help to create more than 250 new jobs as well as increase employment in related sectors by more than 2 thousand workers, introduce resource-saving technologies in the construction sector of North Caucasus republics and successfully implement the government program “Providing Affordable and Comfortable Housing for Russian Citizens in the North Caucasus” among other things by way of reducing housing construction costs by at least 30% and create an additional source of tax revenues in the budget of the Chechen Republic.

A business meeting chaired by Vladimir Dmitriev on Vnesheconombank’s participation in the Baikal pulp and paper mill’s (OJSC) activity was held at Vnesheconombank. Governor of the Irkutsk region Sergei Eroshchenko and representatives the region’s administration took part in the meeting.

In the course of the business meeting they discussed the current economic situation at the mill and measures to stabilize it.

In accordance with a decision taken by the Supervisory Board, Vnesheconombank is to open unsecured credit lines to fund the mill’s current capital on a targeted basis. Above all, financial resources will be used for technical re-equipment, retooling and faultless-free operation of the mill. Some funds are intended for indexation of workers’ wages and some are intended for providing the mill with raw materials, chemicals and fuel for operating the central heating and power plant.

After the business meeting Vnesheconombank expressed its readiness to engage its subsidiaries LLC VEB Engineering and OJSC SME Bank for addressing the mill’s problems (in so far as it relates to supporting small and medium-sized enterprises on the territory of the Slyudyanka district and the city of Baikalsk) in order to stabilize and resolve the situation at the Baikal pulp and paper mill.

State Corporation ‘Bank for Development and Foreign Economic Affairs (Vnesheconombank)’ and the Government of the Republic of Bashkortostan entered into an Agreement on Cooperation to Promote Public Private Partnership Mechanisms.

On behalf of Vnesheconombank the Agreement was signed by Chairman Vladimir Dmitriev and on behalf of the regional Government - by President of the Republic of Bashkortostan Rustem Khamitov.

The parties agreed to cooperate on the issues of forming a regulatory and legal network to apply PPP in the region, establishing a regional PPP center in the Republic, working out investment projects as well as mechanisms for implementing them.