VEB Engineering (VEB Group) received a positive opinion of the State Environmental Expert Evaluation of the Russian Federal Service for Supervising Natural Resources Use on the project to eliminate negative impact of wastes accumulated as a result of the Baikal Integrated Pulp and Paper Mill’s (BPPM) activity.

The documentation submitted is recognized as being in line with environmental standards as well as technical procedures requirements and engineering surveys. According to the documentation there are plans to perform work on sub-slime waters treatment, slime lignin and ashes and slags encapsulation with subsequent burial under a fertile soil layer.

In February of 2013, VEB became a major creditor of the Pulp and Paper Mill by opening a credit line worth 3.6 billion rubles and redeeming the Mill’s debts from Alfa-Bank. In September of 2013, operations at the Mill were stopped and the work was started on mothballing the equipment. At present, slime-lignin storages occupy a territory of 175 hectares and contain about 6.2 million tons of slime-lignin. Waste disposal might take at least 6 years, given stable funding and uninterrupted operation of the Mill’s waste treatment facilities. There are plans to engage 424 former workers of the Mill for this activity.

Speaking before participants in the Conference, V. Dmitriev said that according to the recently approved strategy of VEB’s development up to the year 2020, the amount of the Bank’s industrial exports support was to increase to 700 billion rubles. And a significant part of the exports is to be financed with the use of mechanism for subsidizing interest rates. According to him, “this mechanism is one of the most important elements to support exports and it makes it possible to make Russian products more competitive in terms of price conditions”. “Currently we have sent appropriate applications for subsidizing interest rates on export credits for an amount of 14 billion rubles to the Economic Development Ministry and to the Minitryof Industry and Trade. This is a significant support for exports”, said VEB’s Chairman.

Vnesheconombank together with line ministries is working on creating a Center for Exports Credit and Insurance Support on the basis of EXIAR and Roseximbank. A sort of a credit and insurance factory is being created, which will be responsible for offering financial and insurance services to Russian exporters”, explained V. Dmitriev. According to the concept for creating the Center, VEB is expected to focus on supporting exports of big business and the Center being created – on supporting medium-sized and a part of large-scale enterprises.

At present, VEB is involved in introducing application software, which will allow to accelerate and optimize procedures for considering applications in one window format. This system is to be launched until the end of 2014.

The Russian Government appointed VEB as coordinator for providing comprehensive support for the export of Russian products, works and services. This move is designed to qualitatively improve the national industrial exports support system and make it more accessible for all categories of Russian organizations. VEB continues to expand its support for exports. For example, its portfolio of export financing has increased by 45%since the start of 2014 and amounted to about 184 billion rubles as of September 1. The Bank’s loan portfolio increased by more than 57% and its guarantee portfolioincreased by more than 46%. At present, the Bank is considering several dozens of large and medium-sized export projects, with VEB’s participation share being more than 400 billion rubles. Geography of VEB’s export credits include CIS countries, South-East Asia, Latin America, North and Central Africa, Central and Eastern Europe.

On behalf of Vnesheconombank the agreement was signed by Chairman Vladimir Dmitriev and on behalf of the Ministry – by Economic Development Minister Alexei Ulyukayev. 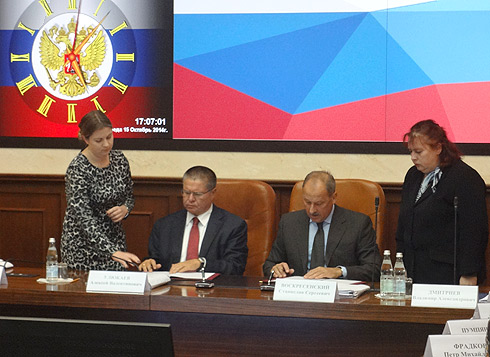 The parties agreed upon main lines of cooperation in foreign economic activity as well as identified mechanisms for making joint efforts designed to expand the export of Russian products, works, services and technologies.

The agreement is designed to consolidate efforts by the Bank and the Ministry to assist Russian companies on the part of the state in gaining access to foreign countries’ markets and in enhancing their export potential.

The Russian Government appointed VEB as coordinator responsible for providing comprehensive support for exports of Russian products, works and services. Vnesheconombank carries on increasing its support for exports. For example, its export support portfolio has increased since early 2014, by more than 45% and amounted to 184 billion rubles as of September 1(the Bank’s loan portfolio increased by more than 57% and its guarantee portfolio – by more than46%). At present, the Bank is considering several dozens of large-sized and medium-sized export projects, with VEB’s expected total participation share being more than 400 billion rubles. The geography of Vnesheconombank’s export projects is as follows: CIS countries, South-East Asia, Latin America, North and Central Africa, Central and East Europe.

In the presence of Russian Prime Minister Dmitry Medvedev and Premier of the State Council of the People’s Republic of China Li Keqiang, Vnesheconombank and the Export-Import Bank of China signed a framework credit agreements for an amount of 2 billion US dollars.

On behalf of Vnesheconombank the agreement was signed by Chairman Vladimir Dmitriev and on behalf of the Export-Import Bank of China – by Vice President Yuan Xingyong.

The agreement provides for extending long-term loan facilities to fund projects to be implemented on the territory of the Russian Federation including in the Far East and Siberia. In the parties’ opinion, this will make it possible to expand trade and economic cooperation between the two countries.