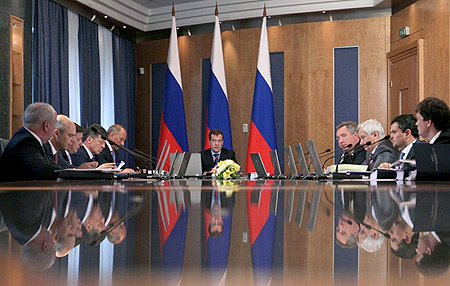 Transcript of the beginning of the meeting:

D.A. Medvedev: Good afternoon again. Today we are holding the first meeting of the Bank's Supervisory Board with several new members. The Board now includes more of my deputies, who are responsible for activities in the relevant sectors. I hope that they will help enhance the efficiency of the Supervisory Board.

I would also like to congratulate Mr Dmitriev (Vladimir Dmitriev, Chairman of the Board of Vnesheconombank) on his new appointment, which was made on June 18. We wish you success in your work.

We have several major issues to discuss today, such as reviewing the report on VEB's performance for the year 2011 and some others. It's been five years since the law which formed the legal basis for the creation of Vnesheconombank was signed. On the whole, the Bank has been a success as a development institution and has played an important role during the crisis. By the way, we’ve just visited the customer service area, where we could watch transactions being conducted, and we talked about measures that had been taken during the crisis to improve the situation and support the economy. Naturally, the Bank supported the real sector of the economy and the Russian financial system, focusing on modernizing the economy and creating conditions for sustainable development of territories. Today, Vnesheconombank operates as a development group and includes several specialized institutions, such as subsidiaries, specialized companies and several other organizations that are united by the same goal. VEB’s loan portfolio as a development bank increased by 4.7 times compared with 2007 when the Bank was established and it amounted to 505 billion rubles as of January 1, 2012. The Bank is now participating in financing 112 investment projects, including modern factories, infrastructure facilities and a new passenger terminal at the international airport in Vladivostok, the automotive cluster in Kaluga, the modernization of carriage building works in Tikhvin and several other projects. Investments in innovation projects account for more than a third of VEB’s portfolio.  Finally, VEB is the founder of the fund managed by the operator of the programs for funding innovative projects of the Skolkovo Foundation, known as the VEB-Innovations Fund. The Fund’s financial resources in the amount of 1 billion rubles will be provided to conduct required scientific and technological expert examination, work out plans for commercializing innovative developments and prepare project documentation.

Last year, the Bank’s strategy up to 2016 was approved. The performance indicators included in it are quite ambitious: the Bank is to invest about 2 trillion rubles, almost 2.5% of GDP, in the Russian economy until the end of 2015. First and foremost, we should focus on the goals that we have set ourselves. Just like in any other organizations, we have to focus on improving corporate governance and internal controls within Vnesheconombank Group, as well as on ensuring adequate transparency levels of corporate governance bodies.

Opinions about VEB’s future as a state corporation vary. I formulated a certain position some time ago. We should approach this issue in a balanced way. In the near future, we will need to decide what the state can do to relieve VEB of some of its responsibilities, so that the Bank does not have to divert its resources for performing non-core functions. We’ll have to discuss all these questions in the near future.

Of course, these are not all the issues on today’s agenda. There are many more of them and most of them are fairly standard in nature. Let's get down to work. And now the floor is given to Mr. Dmitriev. Please, go ahead.

V.A. Dmitriev: Mr Medvedev and members of the Supervisory Board, first I would like to thank you for your positives assessment of Vnesheconombank’s activities. I realize that in part it is designed to encourage us in advance, but let me assure you that the Bank’s team is professional enough to accomplish the tasks assigned to us.

In fact, a large number of issues on today’s agenda are related not only to the activities of Vnesheconombank but also to activities of its subsidiaries. We happen to be the sole shareholder; therefore, all matters that need to be discussed at the shareholders’ meetings must be supported by the Supervisory Board as Vnesheconombank’s and its subsidiaries principal corporate governance body.

The first item on the agenda is the approval of Vnesheconombank’s annual report. I want to state outright that we have followed all the required procedures established at Vnesheconombank that are needed to submit issues to the Bank’s Supervisory Board. First of all, these are corporate governance bodies of our Bank, the Bank's Management Board and the working group responsible for preparing materials for the Supervisory Board’s meetings. All items on today’s agenda were agreed upon during the July 3 meeting of the working group responsible for preparing materials for this Supervisory Board. We have ironed out all inconsistencies and disagreements so all the items on today’s agenda have been fully agreed upon with the interested ministries and agencies and the shareholders who presented the interests of the Supervisory Board members to the working group. Therefore, we could go ahead and discuss each issue in detail, but to save the time I’d rather deal with specific items on the agenda that are, in my opinion, of crucial importance to us.

In particular, I would like to draw your attention to funding the construction of Olympic facilities. The point is that the draft resolution of our Supervisory Board regarding two facilities did not include a provision reflecting presidential instructions regarding the signing of agreements with Olimpstroy on the funding of projects, one of which is an investment project overseen by independent trade unions and the other is a project with regard to which we haven’t signed an agreement with Olimpstroy yet. Therefore, today we’ll include them in the draft resolution: these are Severspetsstroy and the project overseen by the Association of Independent Trade Unions of Russia.

The next issue that I would like to raise is also related to Olympic facilities. I am referring to the Roza Khutor project whose budget has significantly increased. We believe it would be justified from the point of view of securing Vnesheconombank’s interests and covering its risks to limit warranties of the organizations that are related to the project initiators to 15% of their assets of excess costs, if the cost of the project exceeds the original amount for reasons beyond their control. This position has also been included in a draft decision of the Supervisory Board.

The next item that I would like to bring to your attention is related to a range of directives issued by the Government and the Prime Minister on searching for ways to fund the projects of domestic heavy machinery and power engineering enterprises on terms and conditions that are competitive with those of foreign suppliers of relevant equipment. As you know, our businesses lose out for one simple reason: they cannot keep up with the financial conditions dictated by foreign suppliers; financial terms are linked to borrowing periods and, most importantly, to borrowing costs. So, we request you to give instructions to Vnesheconombank and line ministries, including recommendations to the Central Bank, to consider the possibility of extending credits on the terms that would match those offered by foreign exporters of relevant equipment.

We have reached understanding on most of the other issues, and they are included in the draft resolution of the Supervisory Board. Of these issues, I would like to single out the issue of re-financing or reassignment in favor of Vnesheconombank of the Baikal Pulp and Paper Mill’s accounts payable amounting to about 2 billion rubles owed to a number of creditors including Alfa Bank, Rusal Group and some other creditors. The position of Vnesheconombank and the working group responsible for preparing materials for the Supervisory Board meeting is as follows: refinancing of these loans or reassignment of accounts payable should be based on a government program for the future of the Baikal Pulp and Paper Mill and a corresponding program for its further modernization and rehabilitation, or shutting it down and dealing with the waste problem, etc. Any other scenario would leave Vnesheconombank to pay back the loans to the plant’s lenders and be saddled with an unresolved and long-standing problem of what to do with the Baikal Pulp and Paper Mill.  We would like you to support the following approach: Vnesheconombank will participate in funding the Baikal Pulp and paper Mill on the condition that the government and line ministries and agencies decide on the future of this enterprise.

Dmitry Medvedev: All right, you can report on them confidentially then.

Vladimir Dmitriev: I think I’ve highlighted all the key points. If the Supervisory Board members have anything to add …

Dmitry Medvedev: Let’s get down to work. 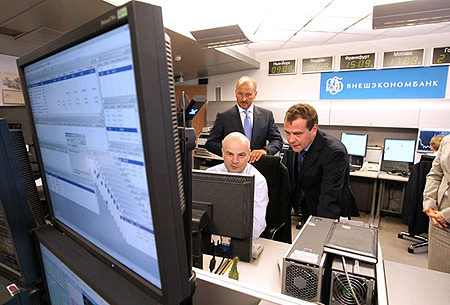 Before the meeting of the Supervisory Board Dmitry Medvedev visited the customer service area of Vnesheconombank’s currency and financial operations directorate and the exhibition of archive documents from VEB’s repository.

From 4 to 8 July, 2012, representatives of Vnesheconombank and its subsidiary institutions participated in the theme session “Innovations and Technical Creativity” at the Seliger-2012 All-Russian Youth Education Forum. 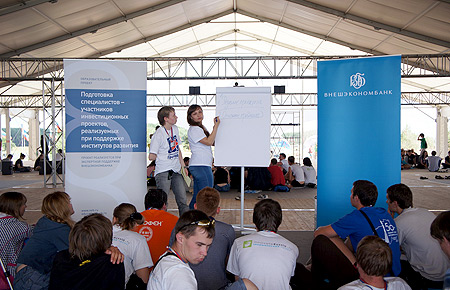