An International Conference “Investment in Sustainable Development. The Role of Financial Sector” was held in Moscow. State Corporation ‘Bank for Development and Foreign Economic Affairs (Vnesheconombank) acted as an organizer of the Conference. 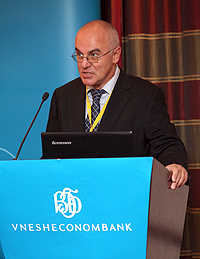 For the first time during its preparations for the Conference Vnesheconombank studied for the first time practices of corporate and social responsibility among its partners in investment projects. OJSC The Moscow United Electronetwork Company, the Miratorg Agro-Industrial Holding and OJSC Avtodiesel (the Yaroslavl Engine Plant) were recognized as the best companies implementing the best socio-ecological practices.

In the attendance of the Conference were Vnesheconombank’s partners from the European Bank for Reconstruction and Development, the International Finance Corporation , the China State Development Bank, Germany’s KfW Bank, representatives of line ministries and departments, leading non-government organizations, experts on international initiatives in the field of social and ecological responsibility (the UNEP Finance Initiative, the Accountability Institute, the Global Reporting Initiative (GRI) and the UN Global Treaty. 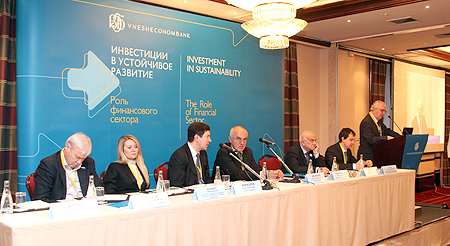 Vnesheconombank’s Report on Sustainable Development for 2010.

Long-term rating of OJSC VEB-Leasing is confirmed at “BBB”, short-term rating “A-3” remained unchanged. The Outlook is stable.

State Corporation ‘Bank for Development and Foreign Economic Affairs (Vnesheconombank)’ and the Agency for Investment Development of the Republic of Tatarstan approved a Plan of Joint Actions on Cooperating in Supporting Small and Medium-Sized Enterprises (SMEs).

A signing ceremony was held in the presence of Tatarstan’s President Rustam Minnikhanov on the territory of Khimgrad technopark (the city of Kazan) as part of a conference on working out general standards for creating and managing industrial technoparks and formulating special programs of supporting SMEs.

On behalf of Vnesheconombank the Document was signed by Board Member –Vnesheconombank Deputy Chairman Mikhail Kopeikin and on behalf of the Agency for Investment Development of the Republic of Tatarstan – by Linar Yakulov.

In the course of the conference a credit agreement was signed between OJS SME Bank (a member of Vnesheconombank Group) and the Investment Venture Fund of the Republic of Tatarstan. The agreement aims not only to increase the amount of resources intended for supporting the SME innovation sector of the Republic but also to participate in investment funds to be created with the participation of the Investment Venture Fund and ensure access to international practices of funding innovation projects.

In attendance of the conference were representatives of Vnesheconombank, the Russian Ministry of Economic Development, the All-Russian Non-governmental Organization Delovaya Rossia and others.

State Corporation ‘Bank for Development and Foreign Economic Affairs (Vnesheconombank)’ and the IFC (the International Finance Corporation which is a member of the World Bank Group) signed an Agreement on Financing the Fund for the Capitalization of Russian Banks (the FCRB).

Under the Agreement Vnesheconombank is to commit 250 million dollars to the Fund for the Capitalization of Russian Banks. Vnesheconombank’s participation in the FCRB was approved by the Bank’s Supervisory Board in July of 2011.

The Fund to be established is to invest in the capital of Russian universal second echelon banks actively operating in the regions funding small and medium-sized real-sector businesses.

“The Fund for Capitalization of Russian Banks is to expand access to financing for Russian companies operating in the regions thereby helping to diversify the economy and raise employment”, said Dimitris Tsitsiragos, IFC Vice President for Europe, Central Asia, the Middle East, and North Africa. ‘We hope that the Fund would not only provide banks with required capital but also would contribute to improving corporate governance and increasing their business’ sustainability”.

“The Fund will become an efficient instrument for funding Russia’s real economy including small and medium-sized enterprises”, thinks Vnesheconombank Chairman Vladimir Dmitriev. “We are glad to support this initiative and join our forces and resources to create an instrument to mobilize new capital for Russia’s banking sector”.

The IFC which is a member of the World Bank Group is the largest global development institution focusing its activity on private sector in the countries with developing and transition economies. The IFC contributes to sustainable growth in developing countries through funding investments, offering consulting services to companies and governments and mobilizing capital in international financial markets. In the 2011 financial year, despite the continuing global uncertainty, the Corporation helped its customers create new jobs, improve activity ecological indicators and provide support for local residents. The IFC’s amount of investments for this year was an all-time high of $19 billion. Additional information is available at www.ifc.org.

State Corporation “Bank for Development and Foreign Economic Affairs (Vnesheconombank)” was established in 2007 under the Federal Law “On the Bank for Development” by means of reorganization of the Bank for Foreign Economic Affairs of the USSR. Vnesheconombank is a key instrument for implementing the state economic policy that is primarily focused on removing infrastructure restrictions on economic growth, enhancing natural resources utilization efficiency, developing high-tech industries, unleashing innovative and industrial potential of small- and medium-sized enterprises (SMEs), as well as ensuring support for exports of industrial products and services. Vnesheconombank participates in implementing projects that are of priority importance for the development of Russia’s economy, but in view of their large-scale character, complexity and long payback periods experience resource shortage coming from the private sector.

Russia’s Finance Ministry hereby informs about the results of investing funds of the Reserve Fund and the National Wealth Fund as of December 1, 2011

The aggregate calculated income from placing funds of the Reserve Fund recalculated in dollars in the Bank of Russia’s foreign currency accounts for a period from January 15, 2011, to November 31, 2011, was 0.40 billion US dollars, which is equivalent to 12.50 billion rubles. The exchange rate difference from recalculating balances of funds in the said accounts from January 1 to November 31, 2011 was a positive value of 26.86 billion rubles.

The aggregate amount of the National Wealth Fund was 2 .764.40 billion rubles which is equivalent to 88.26 billion US dollars including:

1)     In separate accounts to record funds of the National Wealth Fund with the Bank of Russia:

The aggregate income from placing the Fund’s monetary resources on Vnesheconombank’s deposits from January to November of 2011 was 30.03 billion rubles which is equivalent to 1.01 billion dollars.

The aggregate calculated income from placing funds of the National Wealth Fund recalculated in dollars in the Bank of Russia’s foreign currency accounts for a period from January 15 to November 30, 2011, was 1.04 billion US dollars, which is equivalent to 32.69 billion rubles. The exchange rate difference from recalculating balances of funds in the said accounts from January 1 to November 30, 2011 was a positive value of 67.00 billion rubles and the exchange rate difference from recalculating funds placed on Vnesheconombank’s deposits in US dollars was 5.28 billion rubles.