The Second Annual Forum “Small and Medium-Sized Enterprises – Contribution the New Economy” was held on November 30, 2011 in Moscow. The Forum was organized by OJSC SME Bank incorporated in Vnesheconombank’s Group. 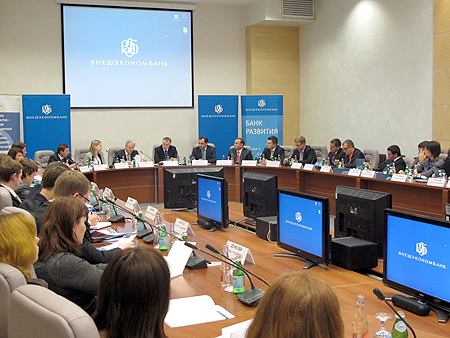 The Forum’s participants discussed prospects for the Government Program of Providing Financial Support for Small and Medium-Sized Enterprises, summed up SWE Bank’s performance for 2011 and voiced plans for 2012-2015.

Speaking at the Forum, Board Member – Vnesheconombank Deputy Chairman Mikhail Kopeikin said that the total amount of supporting small and medium-sized enterprises by the banks of Vnesheconombank’s Group increased to 300 billion rubles from January 1, 2012.

In the course of the Forum, Vnesheconombank signed an agreement on extending a guarantee as security for OJSC Spurt Bank’s obligations to the German Banking Group KfW and a Memorandum of Partnership and Cooperation to Support Innovative SMEs with the Russian Technological Development Fund.

By the established tradition, after the Forum banks, infrastructure institutions and businessmen from various Russian constituent entities were presented with awards for their significant contribution to implementing the Government Program of Providing Financial Support for SMEs.

In the course of the Second Annual Forum “Small and Medium-Sized Enterprises – Contribution to the New Economy” State Corporation ‘Bank for Development and Foreign Economic Affairs (Vnesheconombank)’ and OJSC Spurt entered into Agreement on extending a guarantee in favor of the German Banking Group Kreditanstalt fur Wiederaufbau (KfW).

The Agreement provides for Vnesheconombank to grant a banking guarantee worth 31.8 million US dollars as a security for fulfilling OJSC Spurt’s obligations under the long-term credit extended by KfW.

The Credit Agreement between KfW and Spurt Bank was concluded as part of the German-Russian Initiative on Funding Small and Medium-Sized Enterprises. Under this Agreement the German Bank is to extend a credit worth 30 million US dollars to OJSC Spurt for a period of 4 years to further fund small and medium-sized enterprises operating in the energy efficiency sector.

The Agreement on the German-Russian Initiative on Funding Small and Medium-Sized Enterprises was signed between Vnesheconombank and KfW Bank in February of 2009.

State Corporation ‘Bank for Development and Foreign Economic Affairs (Vnesheconombank)’ and the Federal Space Agency (Roscosmos) entered into an Agreement on Cooperation. 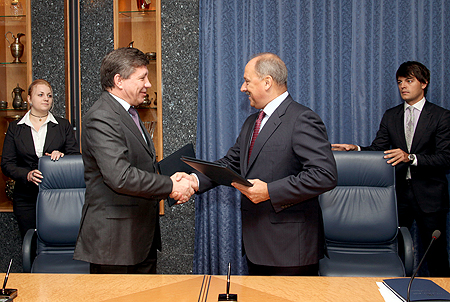 The Agreement’s implementation would help to boost exports of Russian high-technology products and services and promote cooperation ties between participants in international space activity.

The Federal Space Agency is an authorized federal executive agency. The functions of the Agency include pursuance of the state policy and legal regulation, providing state services and administration of the state space assets, as well as management of the international cooperation in joint space projects and programs, the activities of rocket and space industry entities relating to military space technologies, strategic missiles. The Federal Space Agency is also responsible for overall coordination of the activities at the Baikonur space port.

In the course of the Second Annual Forum “Small and Medium-Sized Enterprises – Contribution to the New Economy” State Corporation ‘Bank for Development and Foreign Economic Affairs (Vnesheconombank)’ and the Russian Technological Development Fund entered into a Memorandum of Strategic Partnership and Cooperation.

The parties agreed to develop instruments of financial and non-financial support for SMEs that are implementing innovation, modernization and energy efficiency projects including at research and developmet stages, and ensure continuous funding of SME innovation projects among other things under the Agreement on Cooperation between Development Institutions in Ensuring Continuous Funding of Innovation Projects, participate in operating technological platforms as well as provide expert, consulting and engineering support for projects aimed at developing and introducing innovations.

State Corporation ‘Bank for Development and Foreign Economic Affairs (Vnesheconombank)’ and the Government of the Astrakhan region entered into a state contract on providing investment consulting services for state needs of the Russian constituent entity. 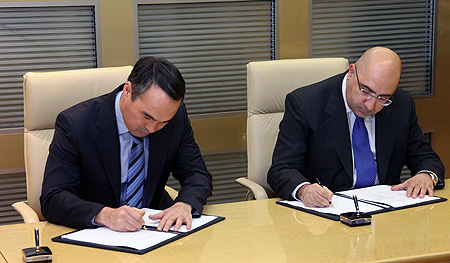 Under the state contract Vnesheconombank is to provide investment consulting services on forming a Project “Construction of Kindergartens on the Astrakhan Region’s Territory on the Conditions of Public Private Partnership”.

Under the contract Vnesheconombank is to formulate a concept of this Project, take necessary measures to implement it and prepare documents needed to identify an investor by way of holding tenders and raise non-budgetary financing.