Within this agreement an individual credit agreement was signed. Under the agreement BTMU is to provide Vnesheconombank with credit resources to fund the contract with Austria’s company Polytechnik Luft-Und Feuerungstechnik GmbH against the coverage of the Austrian state agency Osterreichische Kontrollbank AG (OeKB) for a period of 10 years.

The credit resources are intended for funding the first stage of the project to create a Far Eastern Timber Deep Processing Center. The project provides for the construction of a sliced veneer production facility with an annual capacity of 300 thousand cubic meters in the city of Amursk (the Khabarovsk Territory).

The total value of this project is 150.2 million U.S. dollars. In December of 2010, Vnesheconombank signed an agreement on providing credit resources worth 97.3 million U.S. dollars to OJSC Dallesprom (it is incorporated in EVRAZ Group S.A.). The concept of creating a Far Eastern Timber Deep Processing Center provides for building complementary timber processing integrated production facilities that ensure the non-waste use of timber logged by OJSC Dallesprom.

The Bank of Tokyo-Mitsubishi UFJ, Ltd (hereinafter referred to as BTMU) is Japan’s leading bank established through merging Bank of Tokyo-Mitsubishi and UFJ Bank. By assets amount, BTMU ranks first in Japan and is among the ten largest banks in the world. International rating agencies assigned “A”ratings to the bank. BTMU’s branch network has more than 800 subdivisions including a representative office and a subsidiary bank in Moscow as well as a subsidiary company –BTMU (Europe) Limited in Great Britain.

In the course of the 16th meeting of the heads of government of the Russian Federation and the Peoples Republic of China in the city of Beijing (China), State Corporation ‘Bank for Development and Foreign Economic Affairs (Vnesheconombank)’ and the China Development Bank (CDB) entered into a Framework Agreement on Cooperation.

Under the Agreement the parties are to explore the possibility of providing credit resources to fund the project aimed at constructing the Taishet Aluminum Smelter in the Irkutsk region with a production capacity of 750 thousand tonnes per year. The project’s initiator is LLC RUSAL Taishet which is a member of OJSC RUSAL Group of Companies. The amount of investments to fund the project is 1.43 billion U.S. dollars. A new high technology production facility will become one of the largest smelters in Siberia. More than 3 thousand jobs are to be created at the production facility.

This project’s implementation would help to advance the aluminum sector in Russia.

A world premiere of Alexander Glazunov’s ballet Raimonda was held at the La Scala Theatre in Milan.

The historical ballet was produced in a strict accordance with Marius Petipa’s original production in the Mariinsky Theatre (Saint-Petersburg) in 1898. The recreation of the imperial ballet of the epoch of Nicholas the Second has been the largest project in Italy in the past decade. Besides La Scala’s ballet company, students of La Scala Theatre Ballet School and hired extra dancers were involved in the ballet. An entire Russian team of professionals also participated in implementing the project.

Board Member–Vnesheconombank First Deputy Chairman Nikolai Kosov attended the ballet premiere on behalf of Vnesheconombank and the Russian side of the Forum–Dialogue.

The session’s participants discussed the results of cooperation between Vnesheconombank Group and the Kaluga region as well as prospects for cooperation in the following lines of activity: participation in the regional development corporation, providing support for small and medium-sized enterprises, credit and investment activity, public private partnership, providing support for mono-cities.

Opening the session Vladimir Dmitriev said that nowadays there is a need for moving to a new stage of cooperation between Vnesheconombank and the Kaluga region in order to develop the region on a comprehensive basis using the whole range of banking products and instruments that Vnesheconombank Group has at its disposal.

As a result of the session Vnesheconombank Group and the Kaluga region Government signed a Joint Action Plan for Comprehensive Development of the Kaluga region’s territory for a period of 2011-2013 as well as an Agreement on Cooperation in Providing Support for Small and Medium-Sized Enterprises. 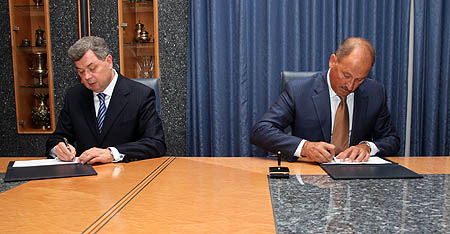 In the course of the extended session on the Kaluga region’s comprehensive development, State Corporation ‘Bank for Development and Foreign Economic Affairs (Vnesheconombank)’ and the Kaluga region Government entered into an Agreement on Cooperation in Providing Support for Small and Medium-Sized Enterprises.

The Agreement aims to establish strategic partnership and promote long-term and effective cooperation in providing support for small and medium-sized enterprises (SMEs) on the territory of the Kaluga region.

The Parties agreed to use Vnesheconombank’s guarantee mechanisms when foreign financial institutions extend credits to fund regional projects on the territory of the Kaluga region.

The Agreement also provides for cooperation in taking measures for rendering the state’s non-financial assistance to small and medium-sized enterprises including information and consulting support.

This Agreement’s implementation would help to expand access to high technologies for small and medium-sized enterprises to make them more competitive, form a comprehensive system of supporting SMEs on the territory of the Kaluga region on the basis of regional measures for providing the state’s support for SMEs as well as on basis of the financial program of providing financial support for SMEs that is being implemented by Vnesheconombank through OJSC SME-Bank.