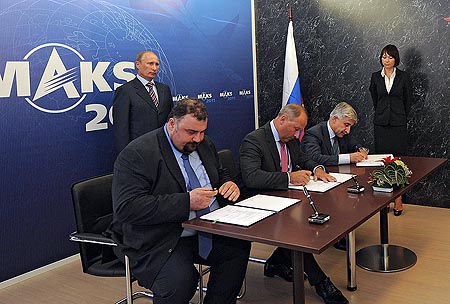 The Agreement provides for OJSC VEB-Leasing to purchase 24 Sukhoi Superjet 100 aircraft and lease them out to the YUTair Airline .

The transaction’s total amount is 760.8 million dollars in catalog prices.

The project would help to further implement the program of renewing YUTair’s fleet of aircraft, expanding the Airline’s intra-Russian and international routes and improve the quality of services.

Open Joint Stock Company the YUTair Airline. YUTair has been operating on the aviation market for more than 40 years. It is among the three largest airlines and has the most extensive network in the country; it operates Russia’s largest aircraft and helicopter fleet of more than 500 airplanes. In high season the Airline’s planes make more than 300 passenger flights daily. YUTair plans to carry more 7 million passengers in 2011 – 40% more than in 2010. In order to carry out its program in 2011 it is using more 140 planes including the largest Tu-54M fleet as well as foreign Boeing757, Boeing-737, Bombardier CRJ 200, ATR 72, ATR 42 and others.

YUTair is number one helicopter company worldwide in terms of the number and load capacity of helicopters, the company has 330 helicopters of all classes including MI-26T helicopters with the heaviest load capacity in the world capable of carrying cargoes of up to 20 tons inside the body and using external load string system. The main customers of YUTair’s helicopter services in Russia are the largest oil and gas companies. In 2010, helicopter operations will be carried out in Russia  and ten foreign states.

The Company has its branches at the main production facilities in Komsomolsk-on- Amur, Novosibirsk and Voronezh.

The Company’s main project now is the Program of creating a family of Russian regional Sukhoi Superjet 100 aircraft. The first operational Superjet 100 aircraft was presented to the public at a plant in Komsomolsk-on- Amur on September 26, 2007. It made a successful maiden flight there on May 19, 2008. In February of 2011, the SSJ100 received the IR IAC certificate. On April 2011, the Armavia Airline put the aircraft into commercial operation.

In 2010, VEB-Leasing became a leader in the leasing sector in terms of new business volume and net leasing portfolio and maintained its leadership in such key capital-intensive segments as leasing of air transport, railway rolling stock and sea and river vessels.

On raising by Vnesheconombank of credit resources within the framework of a project implemented by the Bryansk meat company ltd.

State corporation “Bank for Development and Foreign Economic Affairs (Vnesheconombank)”, HSBC Bank Plc (HSBC) and Australia’s Export Finance and Insurance Corporation signed an individual loan agreement to finance Stage I of a project for construction of a complex to raise highly productive beef cattle stock and primarily process meat in the Bryansk Region. The project is implemented by the Bryansk Meat Company (Ltd.)

In compliance with the document signed, HSBC is to provide Vnesheconombank with credit resources in the amount of USD 39.7 million to finance in 2011 contracts between the Bryansk Meat Company (Ltd.) with a number of Australian beef cattle exporters under the cover offered by EFIC (9.5-year tenor).

Furthermore, Vnesheconombank and HSBC signed an individual loan agreement on raising a commercial loan within the project in the amount of USD 49.6 million (7-year tenor) to finance local expenses in 2011.

On behalf of Vnesheconombank, the documents were signed by Petr Fradkov, Member of the Board – Deputy Chairman of Vnesheconombank, on behalf of HSBC – by Peter Luketa, Global Head of Export Credit and Global Specialized Finance HSBC Bank Plc, London, on the part of EFIC – by Colin George, Director, Trade, Commodity & Agribusiness Finance.

HSBC Bank Plc (HSBC) is part of the HSBC Group, which is a holding company comprising banks, insurance and investment structures. In Great Britain, HSBC ranks 2nd in terms of the total assets. The HSBC Group has an extensive network of branches and subsidiaries abroad, including OOO HSBC Bank (RR). In Russia, HSBC offers a wide range of corporate and investment banking products to companies and financial institutions.

Export Finance and Insurance Corporation (EFIC) is Australia’s  export credit agency, whose major goal is to  support  Australian businesses with financial solutions to overcome financial barriers they may experience when growing their business in global markets.