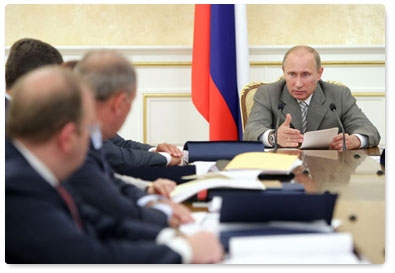 Today, we have a wide agenda. We are to approve Vnesheconombank’s annual report for the year 2010 and consider a number of large-scale projects in the financing of which Vnesheconombank participates.

I would like to say that Vnesheconombank’s activity priorities changed last year. The general economic stabilization and the start of the post-crisis period allowed the Bank to switch from taking emergency measures for providing support for various economic sectors and individual enterprises to accomplishing long-term objectives. Here I mean above all programs aimed at modernizing enterprises, quality infrastructure upgrading and of course supporting small and medium-sized enterprises.

Last year, the entire amount of resources allocated by Vnesheconombank for technological, infrastructure and development projects increased by a fourth to 350 billion rubles. The Bank extended funds to finance the construction of the Boguchan hydroelectric power station, the Urengoy power station, a new passenger terminal in the Vladivostok international airport, the construction of such ice-class tankers as Kirill Lavrov and Mikhail Uljanov and many other projects.

The Bank’s portfolio of loans aimed at supporting the export of Russian high-technology products increased almost to 60 billion rubles. VEB earmarked up to 250 billion rubles for developing mortgage lending including refinancing of housing credits. VEB’s participation in these programs ought to secure a trend towards reducing rates on mortgage credits and expanding mortgage lending in our country as a whole.

As of January 1, 2011, the amount of VEB’s funds allocated through its subsidiary banks to implement programs of supporting small and medium-sized enterprises that I have already mentioned was about 50 billion rubles. I would like you to go ahead with giving high priority to these issues. I’d like to remind you that we are seeking to increase Vnesheconombank’s financial support for small and medium-sized enterprises to 250 billion rubles by the year 2015.

In general, I would like to thank VEB’s entire team for their active efforts last year. In my opinion, the Bank achieved positive results, enhanced its standing as a key development institution in Russia. And its net profit amounted to 28 billion rubles in 2010.

And now I’d like to say a few words about our immediate tasks.

Today, we are to approve a decision to open a credit line to finance the construction of the Arkhyz alpine resort in Karachaevo-Cherkessia. The project provides for the construction of a world-class tourist cluster with modern infrastructure that can host up to 25,000 guests at any one time. We plan to set up a total of six tourist recreational zones in the Northern Caucasus and in the South of Russia. Almost 60 billion rubles are to be allocated from the federal budget to set them up. These facilities are located in Karachaevo-Cherkessia, the Krasnodar Territory and the Republic of Adygea, North Ossetia and Dagestan. I’d like to note that despite considerable funds that we allocate to finance the projects related to the 2014 Sochi Olympics we should not neglect other federal constituent entities as well as for example alpine tourist clusters on the South of our country. Considerable sums of money are allocated for these projects and I believe that it would invigorate the situation in the region, create new jobs and help to boost regional budgetary self-sufficiency.

Undoubtedly, these are complicated, multipurpose projects. We’ll have to address a lot of problems while implementing them. But we are sure that these initiatives would bring tangible results, create new jobs and improve the socio-economic situation in the region as a whole. By the way, our foreign partners are showing more interest in such projects. Have you heard that a joint Russian-French joint venture is being set up to develop the Northern Cau- casian tourist cluster?

Today, we are also to make a decision on establishing the Far Eastern and Baikal Regions Development Fund. As was agreed before, this Fund is going to be Vnesheconombank’s subsidiary company with its headquarters in Khabarovsk I’d like to stress that the Fund is designed not only to implement investment projects but also provide information and image support for the Far Eastern territories to position them as attractive markets for both Russian and foreign investments. This means that the Fund is supposed to be the region’s full-fledged development institution.

I expect that VEB’s prestige will make it possible to engage large Russian and foreign banks and investment companies. Until 2015, at least 70 billion rubles will be allocated to implement the Fund’s projects and the first 5 billion might be allocated as early as this year.

And finally, strenuous efforts are being made now to establish a Strategic Initiatives Agency. The projects submitted to the Bank are currently being discussed by its experts. Final results of the competition to fill the vacancies of the Agency’s Director General and directors responsible for three lines of activity will be soon announced as we agreed before. I think that Vnesheconombank should take an active part in the Agency’s activity and provide it with full support including financial assistance with regard, of course, to those projects that are of interest to the Bank. VEB has already made a decision to grant 100 million rubles to the Agency for it to make necessary arrangements to start its activity. Let’s consider other mechanisms for promoting projects being offered that will be selected and win tenders.

On the Decisions Made By Vnesheconombank’s Supervisory Board

“We have discussed the project today and made a positive decision”, he said speaking about funding this project.

V.Dmitriev noted that despite considerable funds are allocated to finance the Olympic facilities other projects should not be ignored.

V.Dmitriev reminded that at that time a decision was made to fund projects in the ratio of 70% to 30%, that is, Vnesheconombank was responsible for allocating a greater part of funds.

V.Dmitriev added that as to projects that carry increased risk and heavy burdens on investors the said ratio is 90% to 10%, that is, Vnesheconombank is responsible for providing a substantially greater part of funds. Vnesheconombank’s Chairman reminded that the interest rate on credits for these projects is equal to refinancing rate plus 0.4-1.4 of percentage point.

According to V.Dmitriev, the total amount of financing 17 Olympic facilities is 150 billion rubles.

MOSCOW, July 14. /PRIME/. Vnesheconombank is to provide 500 million rubles to set up the Far Eastern and Baikal Regions Development Fund. Vnesheconombank Chairman Vladimir Dmitriev told journalists about it the day before.

According to him, on Wednesday, VEB’s Supervisory Board made a decision to set up the Fund. It will be VEB’s subsidiary company headquartered in Khabarovsk.

V.Dmitriev said that the Fund would be responsible for working out projects from a concept stage to a stage transparent to investors. And Vnesheconombank is ready to participate in funding projects in the amount of no more than 20 percent of their value. The remaining funds are to be made available by a project’s initiator in the form of its own and borrowed funds, with its own fund being no less than 20 percent of a total investment amount.

“We expect that in 2011 – 2015 VEB’s participation share in financing project might reach up to 70 billion rubles”, said V.Dmitriev.

Vnesheconombank’s Chairman also said that VEB’s Supervisory Board approved the procedure for considering and financing a pre – investment stage of the Skolkovo Fund residents’ investment projects.

V.Dmitriev also said that VEB’s Supervisory Board had given its approval to provide the Strategic Initiatives Agency with a grant worth 100 million rubles for it to be able to start its activity. He also said that a special subdivision was to be set up within Vnesheconombank to coordinate efforts with the Agency to select and fund projects.

Moreover, the Bank’s Supervisory Board approved a concept of developing VEB’s Ukrainian subsidiary bank – Prominvestbank. According to V.Dmitriev, the subsidiary bank would focus on working with companies that form an integral part of cooperation ties between Russia and Ukraine. He explained that he meant companies operating in the power and transport and nuclear power engineering industries as well as in the aircraft and engine construction sectors

As part of the theme session “Innovations and Technical Creativity” at the Seliger-2011 All-Russian Youth Education Forum (the Tver region), Vnesheconombank’s consulting center worked on July 6 and 7, 2011. 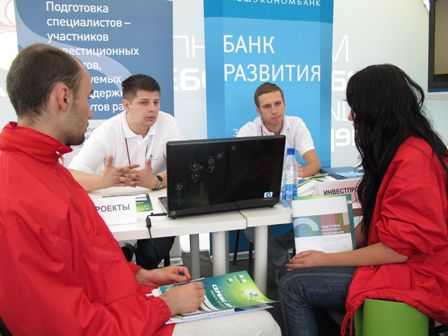 During the period, the session’s participants discussed their innovation projects with specialists from Vnesheconombank’s and MSP Bank’s (the Russian Development Bank till May of 2011) investment subdivisions and they were also consulted on the issues of working out business plans and financial models of investment project, supporting small and medium-sized enterprises and public private partnership. Vnesheconombank’s consulting center provided required information to more than 200 Forum’s participants. 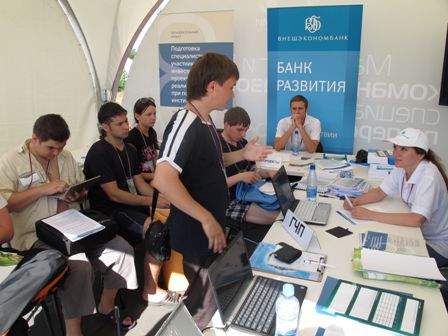 Vnesheconombank invited Forum’s participants to a competition for the best innovation project. The competition is to be held from July 6 to 30 2011. As a result of the competetion three winners are to be chosen. They will be able to undertake paid on the job training at Vnesheconombank during 2011/2012 academic year. 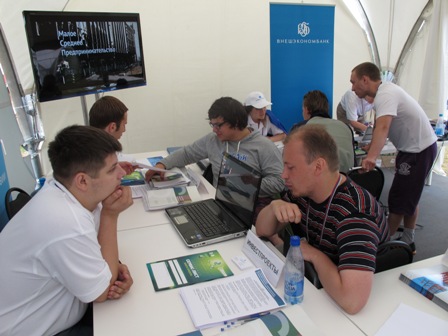 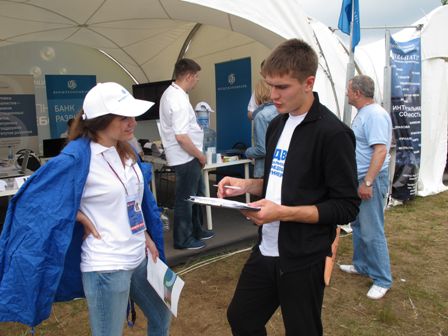 Vnesheconombank’s consulting center operated under the educational project “Training of Specialists – Participants in Investment Projects Implemented with the Assistance of Development Institutions and was aimed at enhancing expertise of Russia’s would-be research and technical personnel.